Skepticism has emerged about the official story regarding the escape of Joaquin “El Chapo” Guzman from the country’s most sophisticated, maximum security prison -- a reflection of a country in shock, a government that has lost all credibility, and a population ready to believe anything but what is right in front of them.

Media and pundits are poking holes in the story the government is telling about Chapo’s incredible escape from prison.

“The tunnel story could be ‘a distraction,'” Jenaro Villamil wrote in an article entitled, “El Chapo and the true tunnel: high-level corruption.”

Another account, published by Russia Today, quotes neighbors living near the jail, who said that authorities did not even arrive to the house where the tunnel emerges until the morning after Guzman had escaped. 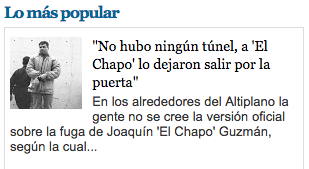 One of the most popular stories on a Mexican news website: "There was no tunnel."

“Everyone says he went out the front door,” one of the neighbors told the reporter, repeating what may inevitably become the primary conspiracy about this chapter of Chapo’s life.

The Russia Today reporter added fuel to the theory, noting there is a small gulley and train tracks between the house and the prison, which the neighbors said would make construction of a tunnel very difficult, if not impossible. The story, of course, circulated widely on other websites and on social media.

And doubts have circulated around other small details, such as why Chapo had hair in the video showing him just prior to his escape, yet in the picture the authorities provided to the public following his escape, he is bald. (See below). Mexico being Mexico, the narco-conspiracies began even before Guzman escaped. Now that Chapo is out, they will never end.

Logic plays only a small role in these theories. What, exactly, anyone would gain by making up this tunnel story -- and going through the trouble of literally constructing the ruse -- is not clear. The tunnel story is embarassing enough, and is perhaps even for mortifying for the Mexican government than if Chapo had walked out the prison's front door.

To be sure, there are unanswered questions. Aside from the shaved head, the train rattling above the tunnel and the gulley leaking into it, there are the logistics of what happened to all the soil that needed to be removed to build the tunnel.

Either many people were paid off, or, as at least one news site suggests, they simply dumped the material behind a wall just outside the mouth of the tunnel, so no trucks were actually used.

Reporters have also swarmed the area, and authorities have given them access to the start and the finish of the tunnel. In fact, the tremendous, and nearly immediate access to the prison cell, the escape hatch, and the tunnel -- all of which is technically a crime scene -- also raised eyebrows, especially considering the Peña Nieto government’s tendency for closing off, not granting, access.

Where Chapo's tunnel reportedly led, from the federal prison to a small safehouse.

There is one part of the crime scene we have yet to see. Besides government officials and presumably Chapo, his engineers, and diggers, there is not yet any footage of anyone traveling from one end of the tunnel to the other. While it would be dangerous and physically challenging to send someone down there, the press could presumably mount a camera on the motorcycle on rails that was used for the escape. This would allow people to see if the tunnel is actually indeed a tunnel.

In any case, the government may have to do this and much more to convince Mexicans of anything it says from now on. In a two-year span, Peña Nieto has gone from Time cover boy to the subject of international ridicule. And his greatest security achievement -- Chapo's capture -- has turned into a tomb for his presidency.

Rebuilding confidence in his government will require more than capturing Guzman. The president is unpopular, but Mexicans are now embarrassed and trust is at an all-time low.

The conspiracy theories that have emerged following Chapo’s escape reflect those two sentiments -- distrust and disbelief. For many, any government version of the story is going to sound strange. Not even the prospect of Peña Nieto riding a motorcycle on rails through the tunnel is going to convince them otherwise.

The Sinaloa Cartel is often described as the largest and most powerful drug trafficking organization in the Western Hemisphere.

Why are Criminal Dynamics Constantly Changing in Tamaulipas, Mexico?