The manhunt for El Chapo has begun
ANALYSIS

The recent prison break by the world's most notorious drug lord, Joaquin "El Chapo" Guzman, has brought to the fore Mexico's inconsistent policy on extraditing drug trafficking suspects wanted in the United States.

Guzman's escape from a maximum security prison was preceded by squabbling between US and Mexico officials over his extradition that began almost immediately after his capture in February 2014. Shortly after Chapo's arrest, US prosecutors said they were seeking his extradition, although it is unclear if they ever made an official request.

For its part, the Mexican government made it clear it had no interest in sending the head of the Sinaloa Cartel -- considered the most powerful drug trafficking organization in the Western Hemisphere -- to face charges in the United States. Mexican officials insisted Chapo must first serve prison time in Mexico before he could be extradited.

"Chapo must stay here to complete his sentence, and then I will extradite him,” Mexico's then-Attorney General, Jesus Murillo Karam, told the Associated Press in January. “So about 300 or 400 years later -- it will be a while.”

Murillo Karam also said keeping Chapo in Mexican custody, rather than extraditing him to the US, was a matter of national sovereignty.

Chapo had previously broken out of a maximum security prison in 2001, but Murillo Karam claimed the possibility of a second escape "does not exist" during his January interview with the AP.

Guzman's most recent escape has drawn the ire of US law enforcement, which assisted in the multi-million dollar, multi-year chase of the drug lord. The risk of another prison break "is exactly why we argued for his extradition," one unidentified law enforcement officer told CNN.

Extradition is based on bilateral treaties, but Chapo's escape has put a spotlight on Mexico's inability to establish a consistent approach to the treaty it has with the US (see US-Mexico extradition treaty here - pdf), especially as it is related to the extradition of drug lords who are wanted in the United States.

In fact, Chapo is only one of a number of notorious drug traffickers who have yet to be shipped to the United States to face drug trafficking-related charges. Meanwhile, a number of other equally egregious violators of US and Mexican law, have been extradited to the US.

The Mexican government's logic on these matters is hard to follow. For example, Mexican officials extradited the brother and son of Sinaloa Cartel leader Ismael Zambada Garcia, yet claimed that extraditing his colleague, Guzman, would have infringed on Mexico's national sovereignty.

The Mexican government extradited Gulf Cartel leader Osiel Cardenas Guillen to the United States, but his former counterpart, Jorge Eduardo Costilla Sanchez, has been in a Mexican jail cell for three years.

And the strange, contradictory list goes on. (See graphic below) 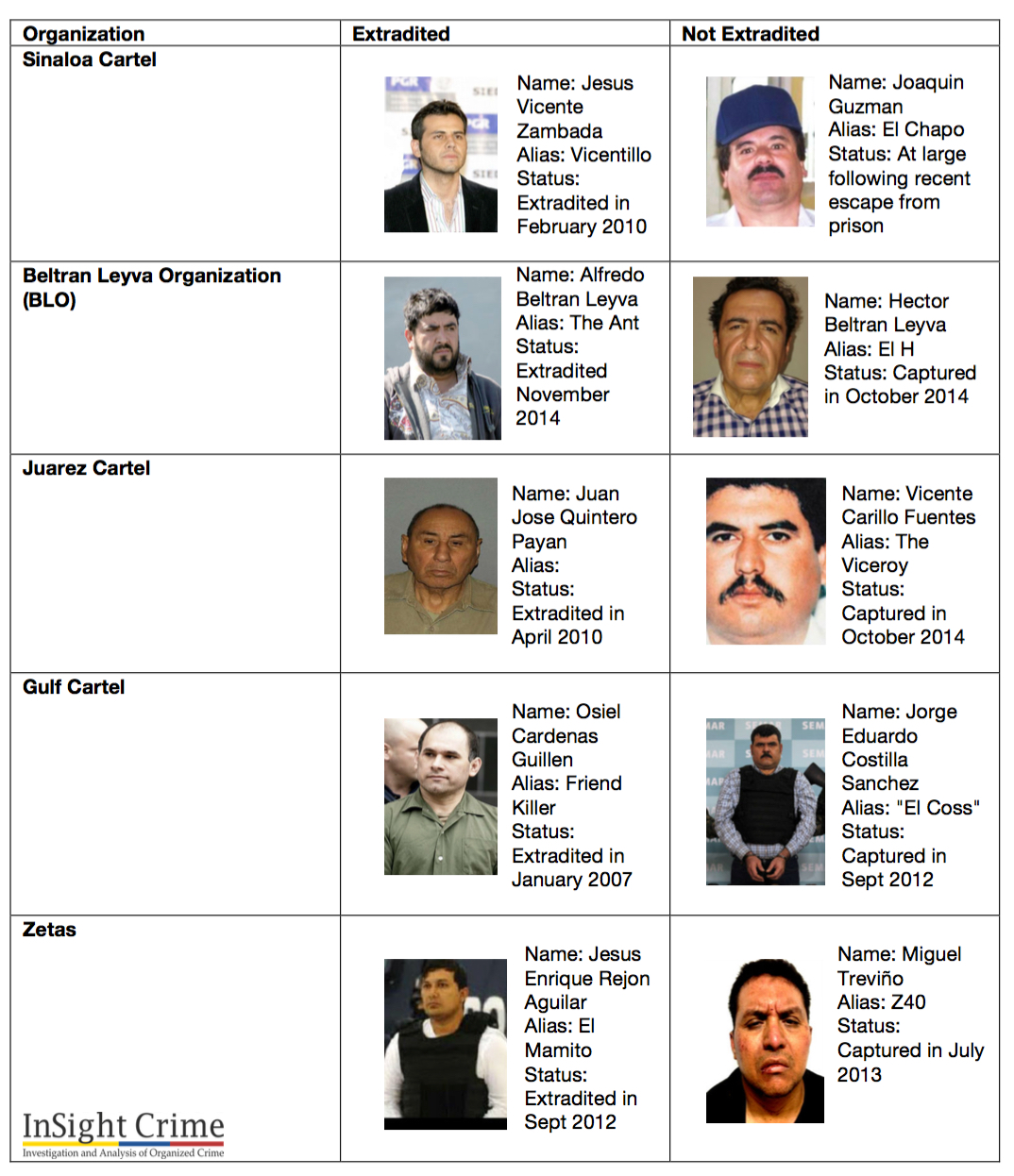 Of course, there are legal questions involved. Mexicans have the right to file what is known as an "amparo," which is akin to an injunction in the US. Drug traffickers file amparo after amparo, and these have delayed many extraditions.

And there are certainly political considerations involved, as the Chapo case illustrates. This is also evident in the Mexican process: the foreign ministry, not the courts, has the final word on extraditions.

Yet there is no one group that has been favored and no clear pattern that can be discerned from the public record. For every major criminal group that has seen the extradition of one its leaders, there is another who is awaiting trial in a Mexican prison.

The US-Mexico extradition dispute dates back to the 1980s, when members of the now-defunct Guadalajara Cartel kidnapped, tortured, and murdered the undercover US Drug Enforcement Administration (DEA) Agent Enrique Camarena. Despite US indictments against 22 individuals, the case did not lead to any extraditions (pdf).

Frustrated, the US took action on its own, executing several of what can only be called extraordinary renditions. The first came in 1988, when US Marshals, with Honduras government help, detained the Honduran national Juan Ramon Matta Ballesteros in Tegucigalpa and brought him to the United States. Protests left parts of the US mission burned to the ground and five people dead.

The second came in 1990, when US proxies captured the Mexican national Humberto Alvarez Machain in Mexico, and shuttled him back to the US in clear violation of the US-Mexico extradition treaty. Mexico sent three diplomatic notes about the incident, and Alvarez Machain and his lawyers waged a valiant battle to get the case blocked because his kidnapping violated the extradition treaty.

Following the Alvarez Machain incident, extraditions stopped, and Mexico succeeded in adding a new provision to the treaty with the US to "prohibit cross-border kidnappings." In 1996, extraditions resumed, albeit slowly and, as noted, unevenly.

It was fitting that prior to Chapo's escape, the extradition feathers were ruffled because of one suspect in the DEA murder case. Rafael Caro Quintero -- a former head of the Guadalajara Cartel who was jailed in Mexico for his participation in drug trafficking and the Camarena killing -- was granted early release from prison on a technicality in August 2013.

US officials saw his early release, and their inability to secure his extradition prior to that release, as a poke in the eye. Mexico's Supreme Court later overturned the ruling and issued a warrant for Caro Quintero's arrest, but like Chapo, the drug lord has yet to be re-apprehended by authorities.

Unfortunately, agreeing that Mexico's approach towards extradition is inconsistent is much easier than finding a lasting solution to the problem. The massive manhunt to capture Chapo has already begun, but restoring US-Mexico relations as it relates to extradition might be a much longer and more complicated process.

Authorities in Peru have discovered at least 3.5 tons of cocaine that police say was destined to be shipped from…

Mexico Going from Bad to Worse in Prosecuting Money Laundering