Mexico City hosted the Museum of Drug Policy, sponsored by the Open Society Foundations, from May 4 to May 6.* During the museum’s first tour in Latin America, its exhibits reflected on experiences of Mexican drug policy, focusing on the victims of surging violence related to prohibitionist policies and militarization.

The drawings of five faces hung on the wall. One next to another. They depicted the faces of real people who face the same fate: the death penalty. The people were citizens of Indonesia, Iran and Myanmar, countries where drug possession is punished by the death penalty. To the side, an explanatory label recounted how drug prohibition measures began in Mexico to curtail its availability to would-be consumers.

“This museum contrasts the ways in which different countries have experienced drug policies, how they have had to apply prohibition [practices] in different ways,” Aram Barra, a security researcher and an organizer of the museum, told InSight Crime.

Mexico’s version of this pop-up museum, now four years old, included 80 works of art by 26 artists, of whom 16 were Mexican. The first piece visitors see is an enormous, imposing sign saying, “NARCO,” in thick letters filled with capsules, pill bottles, needles and lines of fake cocaine. 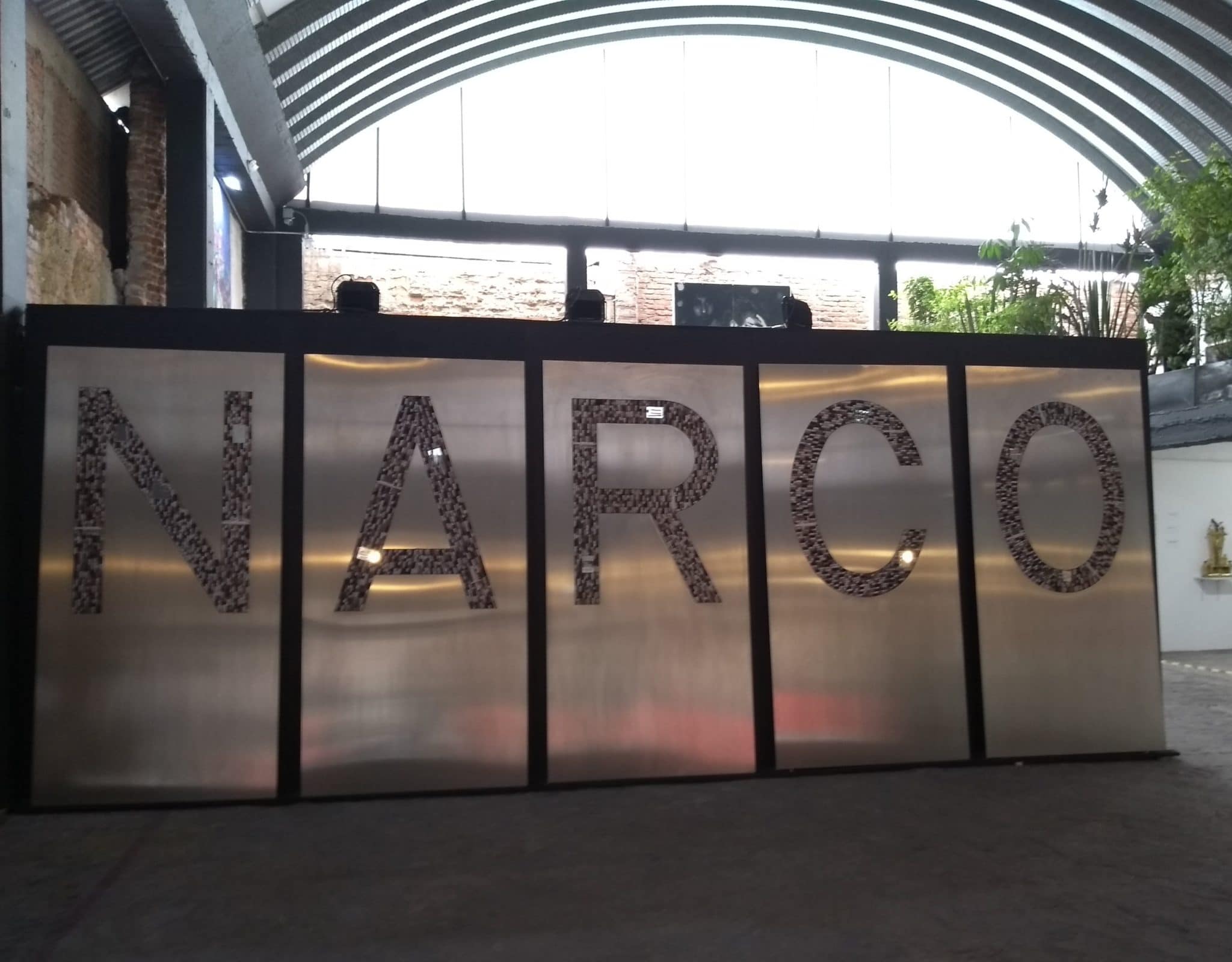 The first floor of the museum gives an overview of the history of drug policy in Mexico, from the 1920s to the present. Next to each time period, a series of artwork shows the human face of the policies’ consequences.

The drawings of the five people awaiting their deaths, together with other stories of people who spent many years in US prisons on nonviolent drug charges, invite visitors to put themselves in the shoes of people who have been criminalized, even demonized, by certain prohibitionist narratives. 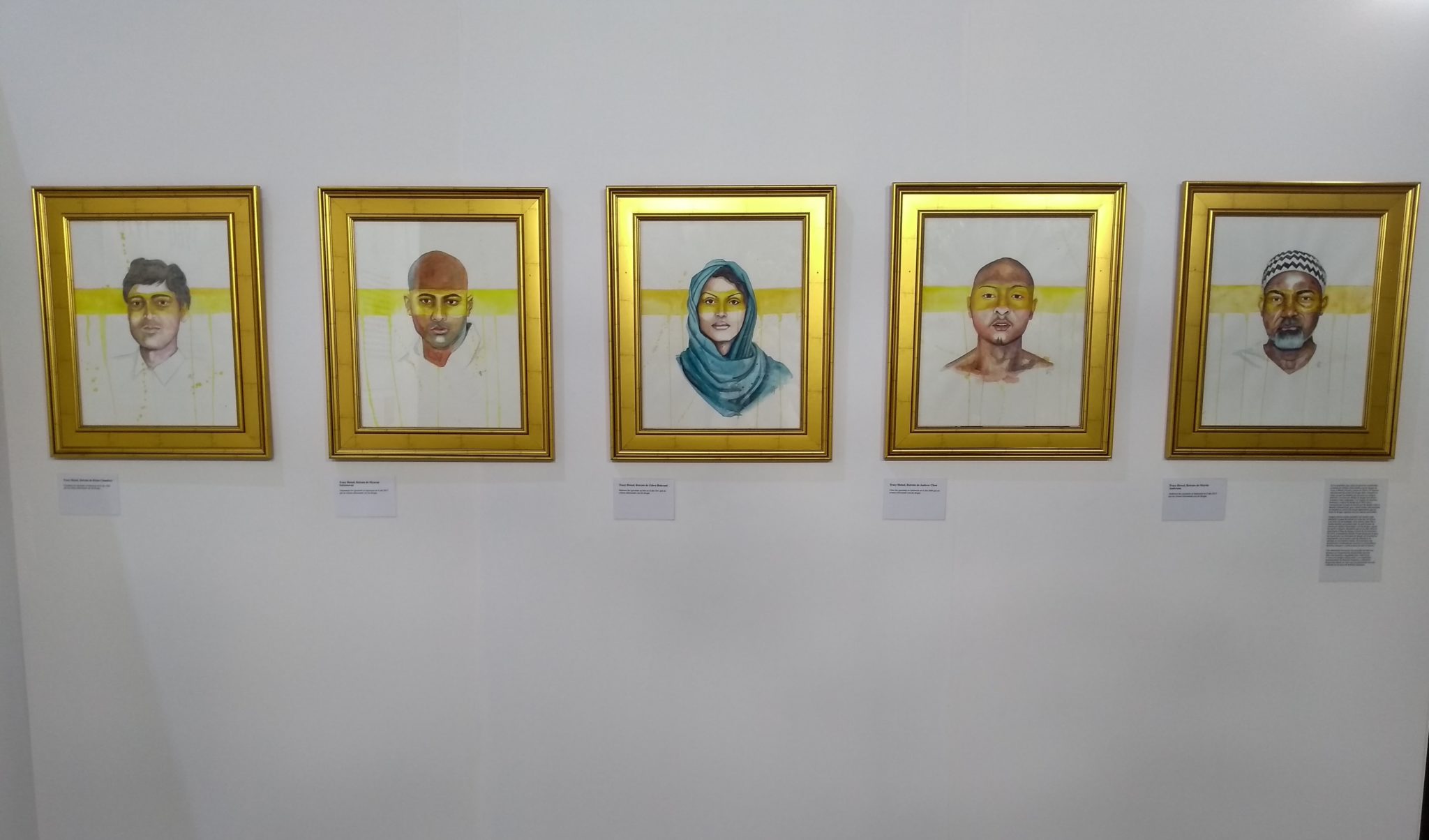 As the history progresses and nears the most recent wave of militarization of the war on drugs starting in 2006, the museum shifts its focus to the Mexican experience. To open this part of the exhibition, a painting coldly depicts a military operation and several dead bodies covered in blood. It is impossible to distinguish between the guilty and the innocent.

Hanging in the center of the space from the highest point of the wall is one of the museum’s most emblematic pieces: “The Aliviane Center Massacre” (“La Matanza del Centro de Aliviane”). The shadowy, dark work displayed a rough-hewn image of a woman overcome with grief. It was created from a real photograph that appeared on local television in Ciudad Juárez, Mexico, after the 2009 massacre at the Aliviane rehabilitation center. A group of hitmen killed a total of 18 youths in the attack.

The artist who created the work, Miguel Aragón, found his inspiration in his own experience seeing how the violence transformed his native Ciudad Juárez, which registered the highest number of homicides in the world between 2008 and 2011. The constant reports of violence inspired him to transform the media images into works of art.

“Artists need to reflect on what society is experiencing and present it to the public in the purest way possible, without judging it, so the public can decide,” Aragón told InSight Crime.

“What hits me the hardest is that the people [victims and perpetrators] lose their names. I’m trying to humanize the people," he added. 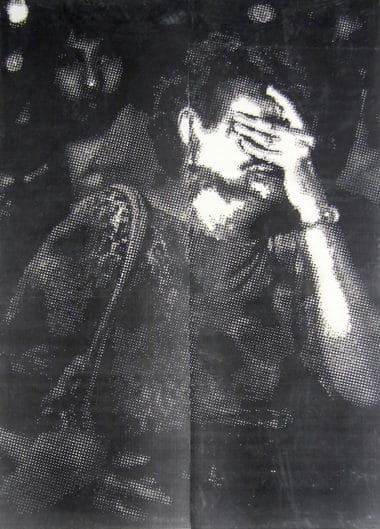 The museum also explores the traditional use of drugs by many Latin American communities, highlighting the vulnerability of those singled out by prohibitionist policies despite the fact that they are one of the least significant links in the drug trafficking chain.

Farmers who grow coca in Colombia are one example, as are as the Wixárika in Mexico, whose religious ceremonies use peyote -- criminalized as harshly as cocaine in the 1990s. To reflect on the repression and persecution of these practices, the museum features an altar created by members of Mexico’s indigenous community.

In front of the altar, a contrasting work of art depicts three gold trophies representing the wealth of the most powerful cartel bosses and the corruption and impunity of certain sectors of the government towards these individuals.

“It’s interesting that the museum presents different narratives of the war on drugs and everything that goes along with it,” a museum visitor told InSight Crime. “It opens your eyes to all the communities affected specifically by these prohibitionist policies.” 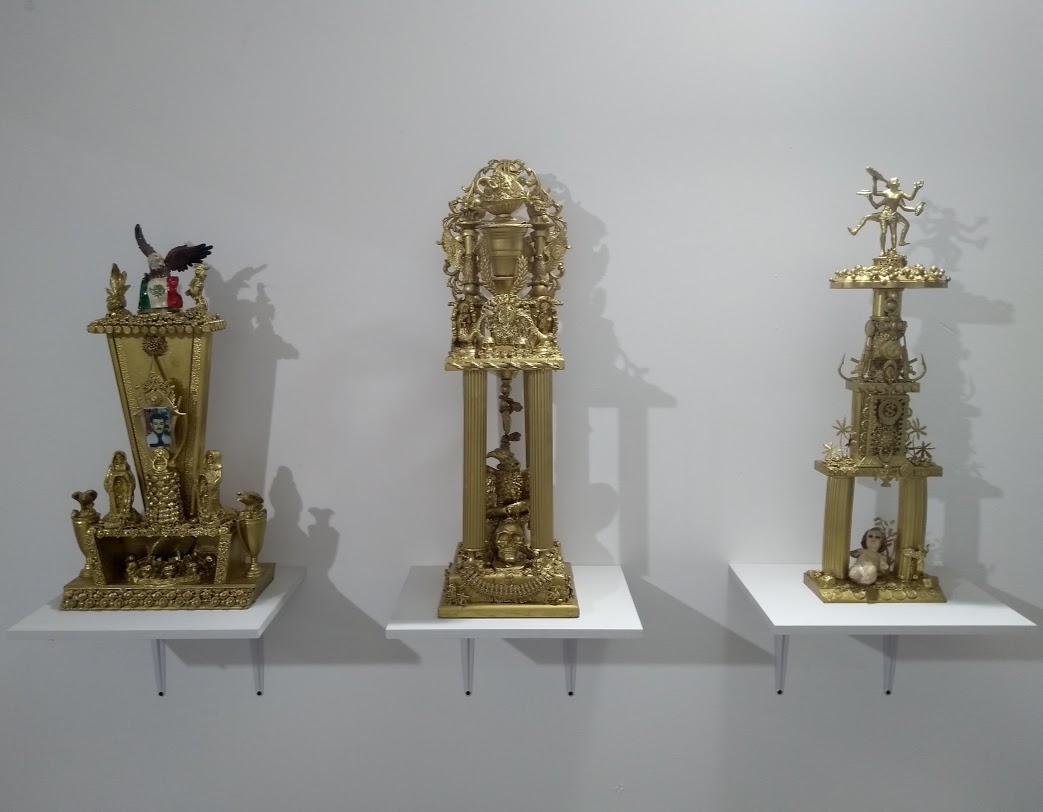 Three very peculiar sculptures greets visitors on the second floor: a deer, an eagle and a fingerprint constructed entirely with weapons seized by the Mexican Navy from criminal groups in Guadalajara.

Observed carefully, onlookers would be shocked by the shear amount of weaponry artist Álvaro Cuevas used to build the structures, urging viewers to reflect on the magnitude of arms trafficking in Mexico. Some experts say up to 200,000 weapons enter the country each year.

The project “Weapons to Shovels” (“Palas por armas”) breachs the same subject. It tells the story of how 1,547 weapons were voluntarily surrendered in Culiacán, Sinaloa, then turned into shovels and used to reforest the area.

“For me, this exhibit plays with the idea that -- using the shovels to plant trees -- to transform weapons into shovels is to convert something that takes life into something that gives life,” said Barra, who is also involved in the Instinto de Vida campaign, which aims to reduce homicides in Latin America by half over the next decade.*

“But I also see it as a reflection on the disappeared who were buried in mass graves,” he added.

(The three sculptures by Álvaro Cuevas and some of the shovels from “Weapons to Shovels,” all made with decommissioned weaponry)

The last section of the museum features an entire space dedicated to the victims of the violence from the war on drugs in Mexico. Hanging from the ceiling, dozens of interlocked embroidered handkerchiefs tell the stories of the country’s many forced disappearances. Handkerchiefs embroidered in red tell the stories of victims whose bodies have been found. Green embroidery means they are still missing.

“We can’t stop feeling angry, we must not normalize the violence,” researcher Rebeca Calzada told the audience during a panel on the militarization of the war on drugs.

(Embroidered handkerchiefs hanging in the museum)

The handkerchiefs embroidered with the stories of the disappeared are joined by a wall on which people of all ages share their ideas. Some of the messages are opinions or commentary or jokes. But above all, they express a desire to seek alternatives to militarization and prohibition, to ensure that current drug policies are not used to legitimize violence.

In response to the piece depicting the five faces of the people on death row, Barra said, “In Mexico we don’t have a de jure death penalty [established by law] like in other countries. In a way, we have a de facto death penalty because of the war we’re experiencing.”

* Disclosure: InSight Crime is supported by Open Society Foundations and is a member of the Instinto de Vida campaign.

Mexican geoduck clam populations are suffering as legal harvests are threatened by rampant poaching, which has driven the species onto…

A bloody ambush on a police unit in the state of Mexico, in which thirteen officials were shot dead, is…