Op-Ed: Promoting the Formation of New Criminal Menace in Colombia?

There is now a clear and present criminal menace and national security threat taking shape, and the Colombian government may be encouraging its growth through its policy choices.

A recent chat with a former FARC guerrilla revealed that potentially hundreds of former rebels are thinking of, or already have, left the peace process to return to the mountains and the criminal economies they once controlled.

“For many of us, the peace process is over. As many predicted, we were betrayed by the government. We assumed that if the government signed an agreement, under international verification, then that agreement would be honored. We were clearly wrong,” a former FARC veteran said.

*This article was originally published by Semana and was reprinted by InSight Crime with permission. See the original in Spanish here.

Many government supporters will quite rightly state that President Iván Duque and his political godfather, former president Alvaro Uribe, led the charge against the peace agreement and won the referendum rejecting it in October 2016.

However, an updated agreement was passed by Congress and ratified by the Constitutional Court, with the condition that it could not be modified for 12 years.

This should mean that the current administration honors the agreement. However, the threats to the accord, and the undermining of the Special Jurisdiction for Peace (Jurisdicción Especial para la Paz - JEP), seem to suggest that the word of the Colombia government is fluid.

Add to this the refusal to respect previously agreed and internationally backed conditions in the peace talks with the National Liberation Army (Ejército de Liberación Nacional - ELN) and the trustworthiness of this government comes under question. This has huge national and international implications, not just related to the peace process.

For the purposes of this discussion, one implication is that many members of the FARC, who entered the peace process in good faith, feel they are being pushed back into an outlaw life. This does not necessarily mean that they will again take up arms against the state, but they will return to the criminal economies that once funded the FARC’s five-decade-old civil conflict.

Let me make a prediction: if President Iván Duque does not embrace the peace agreement with the FARC and fulfill its conditions to the best of his ability (and resources), as well as strengthen the JEP, the ex-FARC Mafia, allied with elements of the ELN, will establish a criminal hegemony across parts of Colombia and become a new national security threat within three years.

And if a government elected on the back of a promise to improve security allows this to happen, then this will be a betrayal of those who voted for it.

President Juan Manuel Santos must share some of the blame as he signed an agreement and made a lot of promises that he did not keep during his administration, thus passing a Herculean challenge to his successor. However, that is then, and we are talking about now and the days to come.

Let us explore further the nature of this growing criminal threat, which we at InSight Crime call the ‘ex-FARC Mafia.’

This is made up of three components: the FARC dissidents (called by the government Residual Organized Armed Groups - Grupos Armados Organizados Residuales), that profess some sort of ideology, and see themselves as the continuation of the now demobilized guerrilla army; the FARCRIM, which are groups of former FARC members which are involved in criminal activities, but have no ideological pretensions; and the ‘hidden FARC’, which is comprised of rebels that never entered the peace process, but remained in the field, keeping control of criminal economies.

With daily monitoring and field research, we have found at least 37 criminal units linked to the ex-FARC Mafia.  Added to this we have good intelligence showing that the FARC dissidents, under Miguel Botache Santillana, alias “Gentil Duarte” and Nestor Gregorio Vera Fernández, alias “Iván Mordisco,” hace reached an agreement with ELN elements commanded by Gustavo Aníbal Giraldo Quinchía, alias “Pablito,” to divide up territory across the eastern plains and within Venezuela. 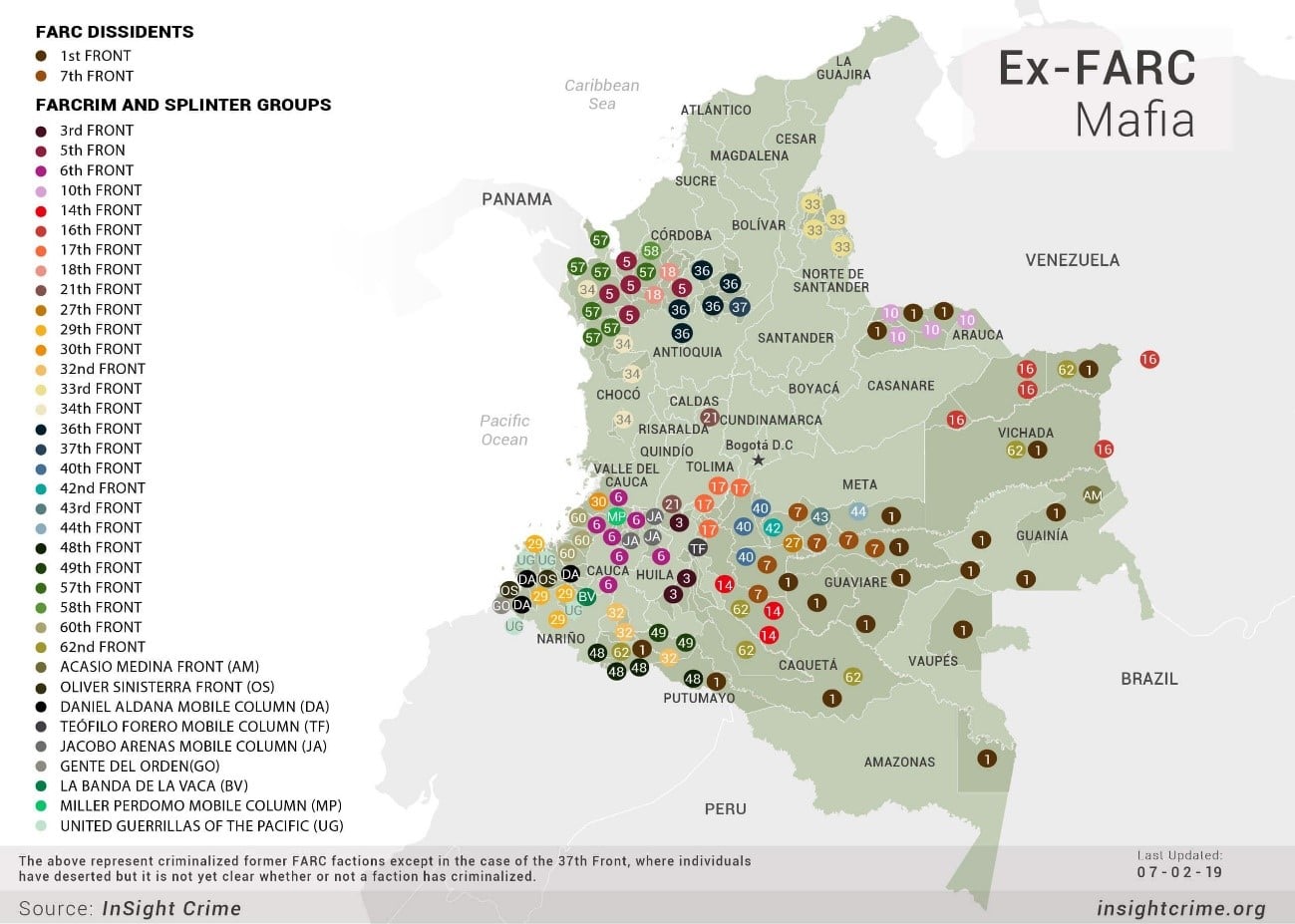 Taking advantage of the still expanding cocaine production, illegal mining and extortion, the ex-FARC mafia are growing, controlling drug routes into Venezuela, Ecuador and Brazil and earning enough money to fund exponential growth, should they find enough recruits and reconnect with other ex-FARC Mafia cells across the country.

We believe that if the ex-FARC Mafia can find a leader of national prominence and exceptional ability (Luciano Marin Arango, alias “Iván Márquez,” and Hernán Darío Velásquez, alias “El Paisa,” spring to mind) it will be able to unite up to 4000 hardened criminals, which allied with a significant percentage of 4000 ELN members could establish criminal hegemony not only in Colombia’s eastern plains and across into Venezuela, but across Colombia, creating a criminal network of national reach.

Does this sound familiar?

*This article was originally published by Semana and was reprinted by InSight Crime with permission. See the original in Spanish here.

The sheer size of Colombia's reserves makes them a target for the illegal clearing, appropriation and sale of protected land.