The United States Treasury Department added arguably the largest drug trafficker in Central America to its kingpin list in December, as the ripple effect of a series of arrests in the region reverberates to the highest echelons of the underworld.

In a sparsely worded December 23 statement, the Office of Foreign Assets Control (OFAC) named Cesar Gastelum Serrano, alias "La Señora," and three of his brothers -- Alfredo, Jaime, and Guadalupe Candelario -- as Specially Designated Narcotics Traffickers for their work for the Sinaloa Cartel in Mexico and Central America.

“With support from his brothers, Cesar Gastelum Serrano has been able to establish himself as one of the most prolific cocaine suppliers for Mexico’s Sinaloa Cartel,” OFAC Director Adam J. Szubin was quoted in the statement as saying. “By designating Gastelum Serrano and several of his key allies, we are once again disrupting the illicit activities of this violent drug cartel.”

The designation is usually a prelim to a formal indictment in the United States or an indication that a sealed indictment already exists. However, OFAC did not delineate property holdings or say where Gastelum Serrano and his brothers operate, as it frequently does when it names someone to the kingpin list. 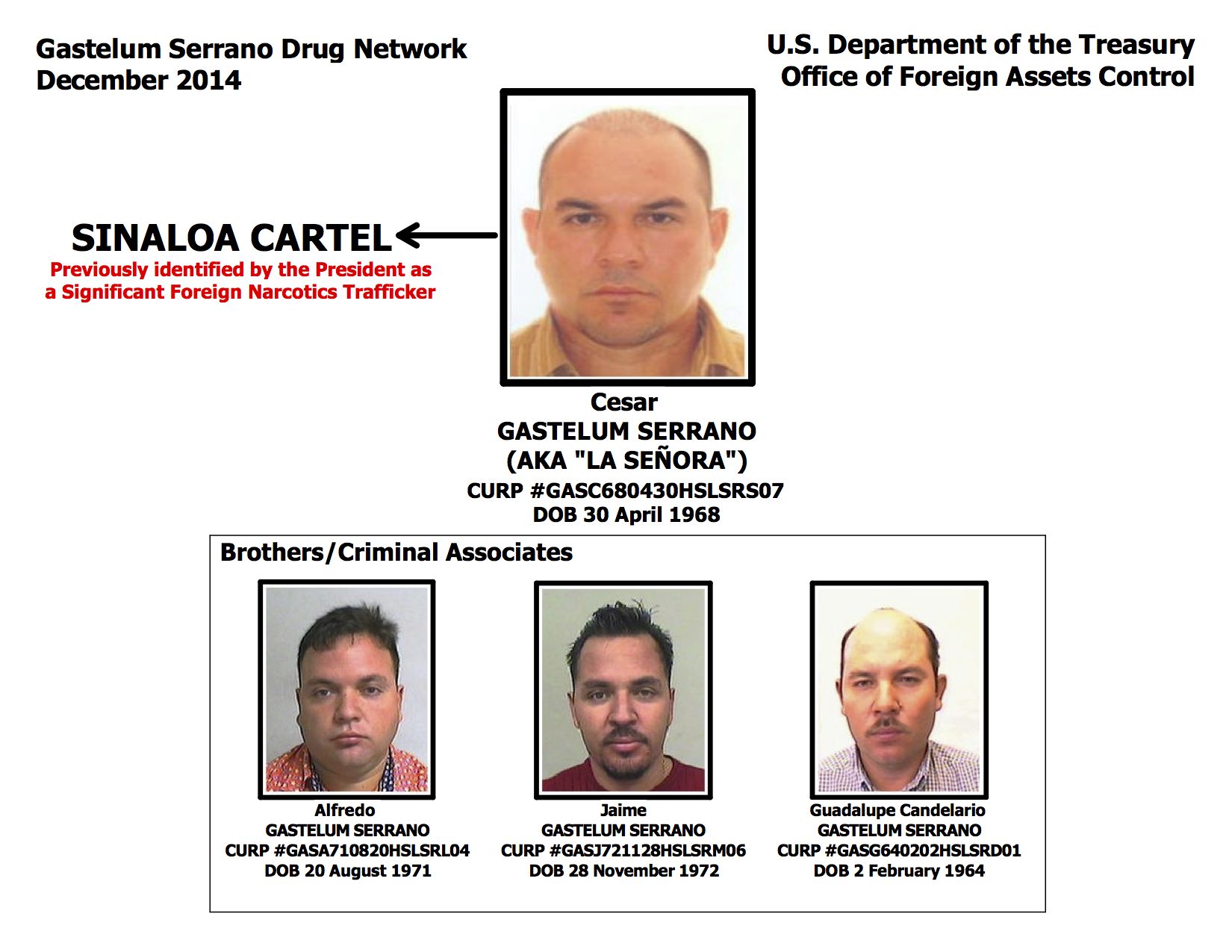 Although Treasury is being coy, US officials think Gastelum Serrano is the largest drug trafficker in the isthmus and one with enough bargaining power to gain a seat at the table next to legendary Sinaloa Cartel figures such as Ismael “El Mayo” Zambada, the current head of the cartel.

Gastelum Serrano's base in San Pedro Sula, Honduras, is the epicenter of drug trafficking -- and violence -- in Central America these days. His network stretches up and down the region where he is the Sinaloa Cartel’s principal envoy and purchaser of cocaine from mostly Central American and Colombian sellers.

“Gastelum Serrano uses a vast criminal network to lead a cocaine trafficking organization capable of moving tons of cocaine per week through Honduras and Guatemala to Mexico,” the OFAC statement says.

How many tons is not clear, but Honduras and Guatemala together see anywhere between 250 and 350 tons of cocaine move through their territory a year, and Gastelum Serrano, US officials believe, has his hands on much of this traffic.

But Gastelum Serrano’s network may be unraveling, which may, in part, help explain a surge in violence in San Pedro Sula in 2014.

The dominos began to fall sometime in 2013, InSight Crime's Mexican sources say, when US authorities captured Marllory Chacon Rossell, alias the "Queen of the South." A Guatemalan national, Chacon Rossell was placed on the OFAC kingpin list in 2012, for her presumed role as a money launderer in the region. She has contacts with political elite in Guatemala, admitting in one interview that she met Guatemala’s Vice President Roxana Baldetti. (Baldetti has vehemently denied having any links with Chacon Rossell.)

The US concealed the fact that it had custody of Chacon Rossell for months leading to suspicions that she supplied information leading authorities to various other parts of the Gastelum Serrano network.

Among that network was the Guatemalan Hayron Borrayo Lasmibat, alias "El Gordo," who US and French authorities captured in Paris in March of 2014. Borrayo was one of the largest traffickers in Guatemala, supplying vast amounts of illegal drugs to both the Zetas and the Sinaloa Cartel, US and Guatemalan authorities told InSight Crime.

In Honduras, the noose also tightened when several pieces of the Sinaloa network came under pressure. In 2013, the US Treasury put the Rivera Maradiaga family, alias the Cachiros, on the kingpin list; Honduras authorities followed up with large-scale confiscations of property and freezing of bank accounts.

In August, US authorities arrested Digna Valle Valle, a member of the trafficking clan by the same last name. By early October, three more Valle Valle family members were in Honduran custody, and on December 18, two of them were extradited to the US. The Honduras government says the third brother will be extradited to the US in January 2015. The Valles were thought to be Gastelum Serrano's principal suppliers in Honduras.

Add to that the tumult that has come with the February 2014 capture of the Sinaloa Cartel’s nominal head, Joaquin “El Chapo” Guzman. Guzman was not necessarily steering the ship anymore, but he had long used Honduras and Guatemala as a storage, processing and dispatch point for his illicit products, and understood the importance of having a high end and trustworthy manager like Gastelum Serrano based in the region.

In sum, the Gastelum Serrano network -- which had been operational for years -- has been decimated in a matter of months. Just where that leaves Gastelum Serrano and his brothers is clear with the Treasury Department’s kingpin designation: exposed.

Two bloody shootouts between security forces and citizens in Mexico's turbulent Michoacan state left at least nine dead, in yet…

Police forces in Mexico's state of Michoacán have increasingly been subject to attacks, a reminder of the ongoing security crisis…

What Mexico can Learn From Declining Violence in 2 Border States