The United States has unsealed an indictment for money laundering against four Honduran nationals, including Jaime Rosenthal Oliva, a former vice president who is one of the country’s foremost economic and political elites.

The indictment (see here -- pdf) was unsealed following the October 6 arrest of Rosenthal’s nephew, Yankel Rosenthal, who was named in the accusation along with Jaime Rosenthal’s son, Yani, and Andres Acosta Garcia, a lawyer for the Grupo Continental, the powerful family economic conglomerate.

The US Treasury Department simultaneously named the three Rosenthals as "Specially Designated Narcotics Traffickers," and added the family bank, meat packing plant and investment arm, among other businesses, to its "Specially Designated Nationals" (SDN) list, which prohibits others from doing business with these companies or face sanctions. (See Treasury organizational chart below)

The broadly written indictment issued by the US Southern District of New York charges the four with money laundering. Specifically, it says they engaged in numerous transactions relating to “felonious narcotics offenses” and “offenses against a foreign nation involving bribery of a public official and the misappropriation, theft, or embezzlement of public funds by and for the benefit of a public official.”

The indictment, however, does not specify what those narcotics or bribery offenses were, nor who was involved in them. All of the transactions occurred “in whole or in part” in the United States, the accusation says.

In an email to InSight Crime prior to the release of the indictment, Jaime Rosenthal defended his family and his businesses.

“In Honduras it is very difficult to be wealthy and avoid suspicion of having made your money in illegal transactions,” he said. “People do not believe that you can be wealthy because of honest and hard work.” (See interview with Jaime Rosenthal about his relations with criminal groups here)

In an email exchange with InSight Crime after the indictment was released, he said his business group needed help.

"We cannot let anyone believe that we have done something wrong and the best way to find out the truth is to appoint a company that specializes on this type of investigations in order to find out if we have ever done anything illegal," he wrote. "Our companies are worth a lot of money and we have many, many years of hard work and savings that made us able to grow and obtain the capital resources needed to grow in a country that has no capital market. We believe that we need this type of investigation in order to be able to clarify any doubts from anyone." (See full text of the email below)

Rosenthal’s father came to Honduras in 1929, from a region known as Bessarabia, an area covering parts of modern-day Russia, Ukraine and Moldova, he told InSight Crime in an interview in June. After working for a while with a foreign insurance company, the family started its own insurance company.

Continental Insurance was the first of what would become the Grupo Continental, or Continental Group. With cement, real estate, banks, telecommunications and media companies, it is one of Honduras’ strongest economic conglomerates.

Rosenthal’s children help him run the businesses. Yankel ran the family’s sugar mill before selling it and spending much of the money he had made in the deal, according to Jaime Rosenthal.

“He is a big spender,” Rosenthal said in the email exchange with InSight Crime. 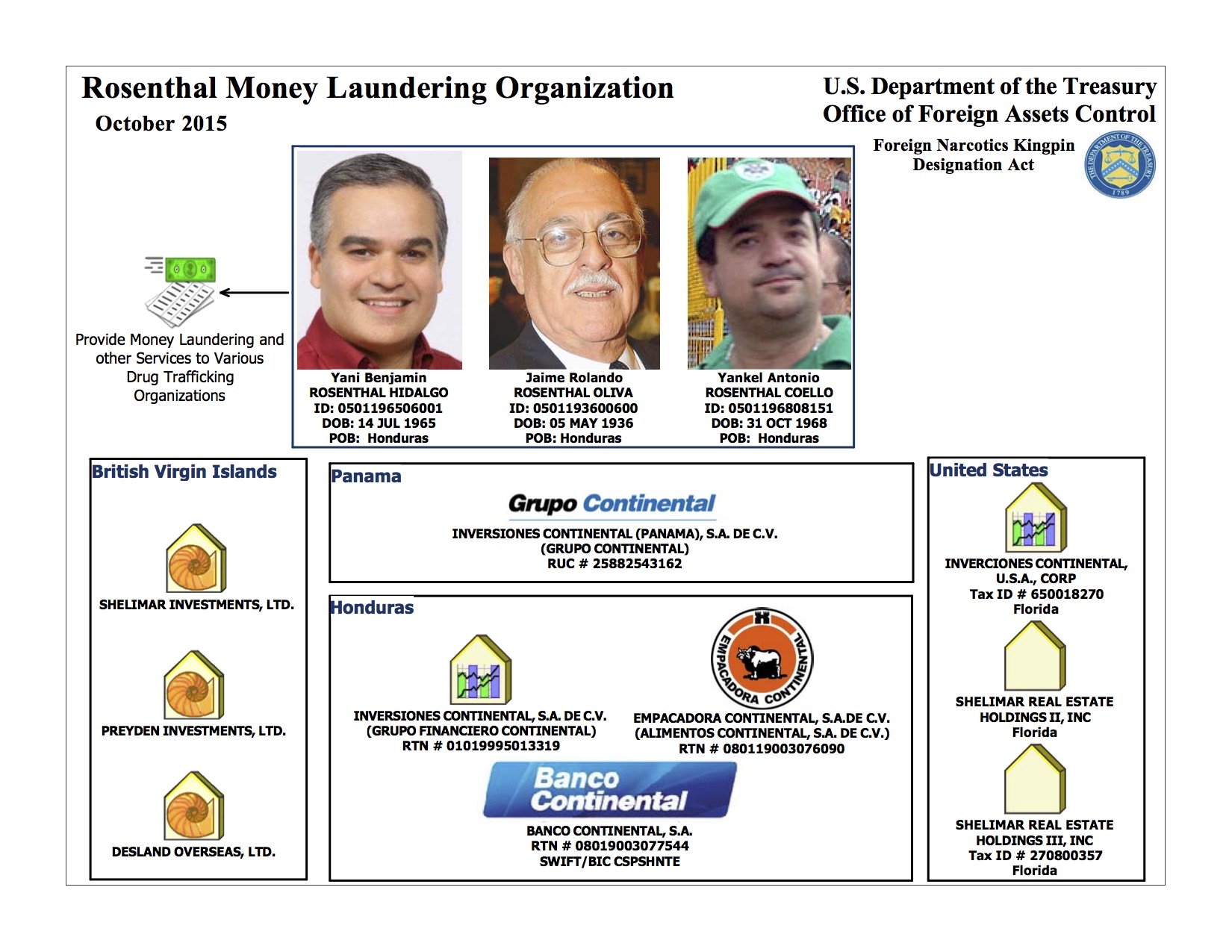 The indictment has the potential to shake up Honduras for years to come. The country was a safe haven of sorts for drug trafficking, corruption and money laundering, especially during the last decade, the period the indictment covers.

The Rosenthal family is part of the ruling elite often referred to as the transnational elites or “Turks,” a quasi-racist reference to their “Middle Eastern” origin. Their power comes from having large investments in banking, telecommunications, media, construction and lately non-traditional exports like African palm.

In addition to the economic holdings, the family is a power broker in the opposition Liberal Party. Jaime Rosenthal has run for president several times and his son, Yani, ran for president in the last elections.

Their indictment will send shivers through the other elites in Honduras. These elites are not held accountable in a country where, more often than not, they make the rules and decide who can break them.

The entrance of the United States justice system changes this equation. US justice is less susceptible to political and economic pressures regarding criminal cases of this magnitude (although certainly this has been put to the test in recent money laundering cases in the US).

The impact may reach far beyond any convictions secured in this case. US investigations can also lead to the freezing of assets, divestment by foreign companies from their Honduran investments, broken contracts amongst partners, and the loss of travel visas, among other problems.

The Rosenthal indictment that covers money laundering related to narcotics trafficking most likely stems from the family's business connections to an organization known as the Cachiros. Some of the Cachiros turned themselves in to US authorities in January of this year. They are thought to be providing state's evidence in cases like these.

The money laundering stemming from corruption and bribery, however, is a mystery.

Either way, the US is sending a message that both narcotics and corruption cases fall within its legal purview.

I believe that what we need is that the US Court appoints a company that can do a full investigation since the beginning of our companies until today, to investigate everything so that everything can be clarified since in the business we are, we need a lot of credibility and confidence.

We cannot let anyone believe that we have done something wrong and the best way to find out the truth is to appoint a company that specializes on this type of investigations in order to find out if we have ever done anything illegal.

Our companies are worth a lot of money and we have many, many years of hard work and savings that made us able to grow and obtain the capital resources needed to grow in a country that has no capital market.

We believe that we need this type of investigation in order to be able to clarify any doubts from anyone.

Our creditors are already worried, someone has involved us in a problem that has nothing to do with us or our companies.

Can you help us to do this?

Venezuela’s Peace Zones were arguably some of the strongest evidence showcasing the odd, fluctuating relationship between organized crime and the…