Fragmentation and the Changing Face of LatAm Organized Crime

The following passage explores how the process of fragmentation has changed Latin America's organized crime landscape, and what the implications are for the region's criminal groups.

During the 21st Century, fragmentation of criminal organizations has intensified. Colombia in the late nineties had two major cartels (Medellin and Cali) that actually represented a cooperative enterprise by dozens of independent producers and traffickers. They became a confederation of paramilitary groups made up of more than thirty different kinds of factions. During the last eight years after the process of demobilization of the paramilitary groups, this agglomeration of factions mutated and recycled themselves in hundreds of gangs and criminal bands. In Mexico, according to the latest count by the attorney general's office of the country, seven major criminal organizations have now become "between 60 and 80."

Excerpted from “From Drug Cartels to Predatory Micro Network” by Juan Carlos Garzon Vergara as it appears in Reconceptualizing Security in the Americas in the Twenty-first Century edited by Cynthia McClintock et al.Copyright © Lexington Books. Used by arrangement with the publisher. All rights reserved. No part of this excerpt may be reproduced or printed without permission in writing from the publisher.

In Central America, in countries like El Salvador and Honduras, some sources point to internal divisions of the Mara "Barrio 18" and a process of fragmentation linked with the alliance between some clicas (gang units) and larger criminal groups. In Argentina, local criminal groups are proliferating as they seek to control the burgeoning local consumption market. The current landscape in Latin America shows the active presence of multiple micro-networks, defined as sets of individuals who work together in a specific territory to exploit others (persons, groups or sectors) for personal and organizational profit, taking advantage of the black-market and informality, taxing legal and criminal activities therein.

Most organized crime groups in the region -- from Mexico to Argentina -- are now involved not only with drugs, human trafficking and money laundering but also in local markets including extortion, kidnapping and the retail drug market. At the local level, these markets compete for the profits obtained through the export of illegal goods. Steven Dudley illustrates this point by analyzing the accounts of one Mexican criminal organization and how "predatory" activities can offer similar profits compared to illegal drug businesses: 8 kilos of cocaine=1 million pesos; 5 major kidnappings=1 million pesos; 200 weekly extortions=1 million pesos. As the graph below shows, the range of activities is broad and diverse, linking the international and the local dimensions, including predatory crime and also trafficking of different goods and services to supply illegal markets. One of the current trends is not only the diversification -- participation in multiple activities, but also the shift of activities toward the "local/predatory" quadrant. 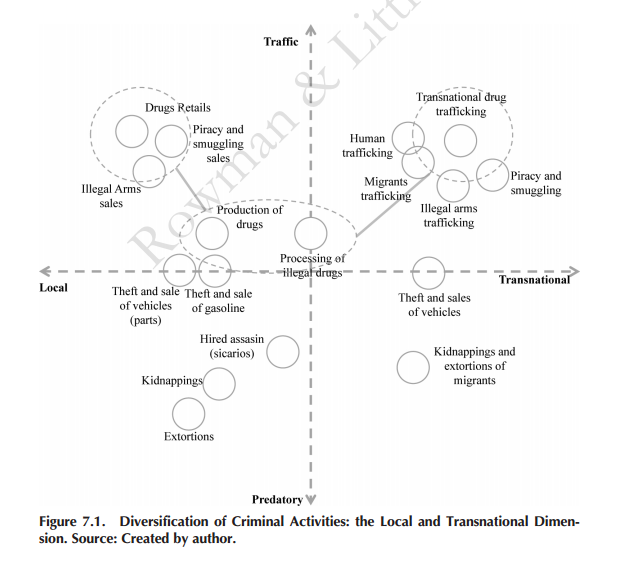 Domestic illegal markets offer criminal groups a number of advantages. They provide a constant and easily accessible cash flow and involve the contracting of a local labor force, thereby providing criminal organizations with a social base. At the same time, local markets serve as effective vehicles for the laundering of assets, through interaction with the informal sector (which is quite large in many Latin American countries), thereby opening up possibilities for infiltrating the legal economy. Also, they pose lower levels of risk -- compared with the sentences for drug-related offenses.

Despite the image of the spread of organized crime into more countries in the region, most of the criminal groups tend to be "local in scope," to use Peter Reuter's depiction of US "illegal enterprises". They are heavily dependent on the local environment, where they can ensure their own protection, corrupt authorities, build a "social base" and control both illegal and "legal" markets. Most of the factions that have tried to establish their physical presence outside of the territory of origin fail; to achieve its expansion, these groups have had to resort to local groups (dominating the groups, making alliances or through outsourcing jobs to the local factions). This is what happened in countries like Mexico and Colombia, where the gangs and local criminal bands have been involved in the disputes of the mayor "syndicates". As Diego Gambetta states analyzing the Italian mafia, organized crime "...is a difficult industry to export," but that does not mean that local structures can't be part of international "criminal macro-networks", especially in a highly globalized context that provides many business opportunities and contacts.

One case that illustrated this relationship between local and global is what happened with the avocados in the state of Michoacan (Mexico). This state produces roughly half of the avocados consumed in the US. Some estimate that criminal groups extort (locally) some US$150million a year by extracting payments from producers or by taking over plantations and growing avocados themselves. The American consumer now pays over 20 percent more for an avocado than they did a year ago. This is a clear example of how a local criminal activity is linked with an international legal business, in a globalized world.

Migration (i.e. Escape) and the Emergence of a New Generation of Criminals

Bruce Bagley proposes what he calls the "cockroach effect" that refers to the "...displacement of criminal networks from one city/state/region to another within a given country or from one country to another in search of safer havens and more pliable state authorities". Contrary to the view of scholars who argue that a criminal organization -- like an ordinary company -- rationally decides to open a branch in a distant territory, what happens in Latin America is similar to what Federico Varese found in the case of the Russian Mafia in Italy: "a Mafioso is in new territory because he escapes to it. Once there, he explores local opportunities." In most cases this is not an orderly process of expansion, but a survival mechanism.

Following this reasoning, according to Varese, "The outpost abroad is not a branch of a corporation, bur rather a semiautonomous unit allied to the homeland." In some cases, connections with the homeland continue, as the survivor or "refugee" groups take advantage of the new situation, growing the network and expanding the activities of the group into a foreign territory. For example, in the cases of Colombia with the emergence of the BACRIM, the migration of its leaders has been accompanied by the transplantation of two main operational lines: trafficking and partnership for retail cocaine sales, and asset laundering.

One important thing is that while first and second tier criminals migrate in search of safe places, a new generation of members takes over the leadership of local groups. These criminal groups have received what Daniel Rico -- analyzing the case of Colombia -- calls a "criminal inheritance," including contacts, reputation, capacity to negotiate, and networks of corruption and firepower, among other things. This is the new challenge for the security of many cities and towns across Latin America, where there are multiple groups willing to confront local authorities and defend what they consider "their" territories.

This trend is ongoing, with efforts by criminal organizations from Colombia, Mexico, and Brazil to ensure their access to areas of production in the Andean Region, and to maintain control over the main routes to the US and Europe. In these cases there are rational decisions to expand to new territories, looking for international alliances, joint ventures and "subcontracting" groups, with the goal to manage the cycle of illicit drugs.

This chapter has identified and described two forces that drive changes in organized crime in Latin America: the force of the state and the force of the market. This approach supports the hypothesis that the punitive approach of the "war on drugs" (through strategies such as interdiction of drugs, the "kingpin" model and increase of penalties), and recent changes in the drug market and the legal economy (the "new" international and retail drug markets, and also a growing demand of a large range of products at very low price in a context of the expansion of consumption) have had profound impacts on organized crime.

Recognizing that criminal groups try to minimize their costs and maximize their benefits, in a context of imperfect knowledge and incomplete information, the chapter analyzes how criminals have responded to forces of change, identifying four trends or patterns that typify the ongoing transformation: fragmentation, extreme localization, diversification and migration. Through this approach, this paper argues that the predominant criminal structure in Latin America is the "Predatory Micro-network", defined as a set of individuals who work together in a specific territory to exploit others (persons, groups or sector) for personal and organizational profit, taking advantage of the black-market and informality, and taxing legal and criminals activities therein. With this concept, this chapter contributes to the debate regarding the role of the local criminal groups in a context of a highly globalized world.

The shifts analyzed by this work have profound analytical and practical implications. The differences between groups (international or local, enterprise groups or contractor, territorial or trafficking) are becoming more diffuse, with multiple gray zones in which the "levels" and "tiers" are commingled. From the policy perspective, this dynamic is causing confusion and it is not clear within the State who should respond and under what strategy.

In this context, the spotlight must move from the international and national dimension to specific territories: villages, cities, and neighborhoods where different dynamics and actors converge to obtain profits from legal and illegal activities, employing threats and violence as needed. The recognition of this transition is a first step to rethink the security challenges in Latin America and the necessity to find new frameworks to respond to a dynamic threat.

*Juan Carlos Garzon Vergara is a Global Fellow at the Woodrow Wilson Center in Washington, DC and a research associate at Fundacion Ideas para la Paz in Colombia. Garzon is an international advisor on security and drug policy reform.

From Juarez to Rio, Social Programs Can Reduce Violence

Programs to rebuild the social fabric of troubled border city Juarez, one of the most violent in Mexico, can be…

Nine bodies were found in three mass grave in northern Colombia, which police said could be linked to the conflict…

RAND: Mexico Is Not Colombia