Every day, Mexico's cartels attempt to ship untold quantities of drugs across the US border. And every day, Mexican and US authorities try to stop them. The drugs are usually hidden in commercial or passenger vehicles transiting official checkpoints. But in recent years, crime groups have begun to experiment with a wide range of innovative methods for moving illicit cargo past one of the world’s most heavily guarded borders and into the most lucrative drug market. Below, InSight Crime looks at five of the most creative.

The first “narco-tunnel” from Mexico to the US was discovered in 1990. According to the Los Angeles Times, the tunnel ran 273 feet from a luxury home in Agua Prieta, Mexico to a warehouse in Arizona, and it was equipped with electric lighting, a drainage system and a trolley for moving the drugs. US anti-drug officials described it to the newspaper as “something out of a James Bond movie,” perhaps because access to the tunnel on the Mexican side was provided by a “hidden switch inside the luxury home that, when activated, boosted a pool table and the concrete slab below it high into the air to open the way to a narrow shaft below.”

Since then, dozens of tunnels have been discovered along the border -- many of them incomplete, and many of them linked to the powerful Sinaloa Cartel. Its top boss, Joaquin “El Chapo” Guzmán, famously escaped from a maximum-security prison by way of an elaborate mile-long tunnel in July 2015.

One of the biggest narco-tunnels ever discovered in the United States was found in April 2016. According to the San Diego Union-Tribune, it ran half a mile from a house in Tijuana, Mexico to an industrial property in the San Diego area, and it was equipped with lights, rails and a ventilation system. Authorities indicated the tunnel was likely used to move multiple tons of drugs that included marijuana and cocaine. By all indications, this method will remain a popular option for smuggling narcotics across the border.

Another ancient technology adapted for modern use, drug trafficking groups do not seem to have adopted the catapult with the same zeal as the tunnel. There is, however, at least one documented case -- captured on grainy surveillance camera footage -- in which suspected smugglers appear to load packages of marijuana into a large contraption on the Mexican side of the border and launch them into the United States. A Mexican official told the Associated Press the catapult was capable of flinging more than four pounds of marijuana over the border at a time.

Mexican authorities have discovered several other catapults suspected of being used for drug trafficking in recent years. But the relative inefficiency and inaccuracy of these machines means that they are unlikely to attain widespread use as a method for transporting drugs across the border. 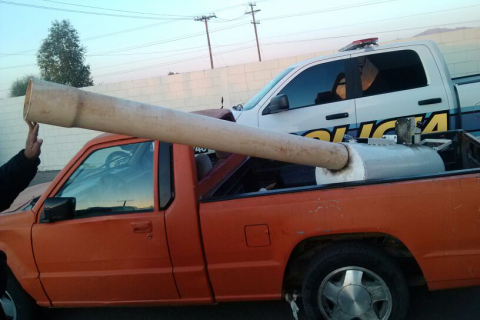 The shortcomings of the catapult method do not appear to have deterred traffickers from seeking ways to shoot drugs from Mexico into the United States. Authorities in the Mexican state of Sonora recently discovered a vehicle modified to serve as a mobile air cannon capable of launching packages of drugs across the border. It is not clear whether the apparatus -- described by the news outlet Fusion as something that looked like it “came out of the Mad Max movie” -- was ever used, nor is it clear if it even functioned as intended.

There are other documented instances in which traffickers have used cannon to launch drugs across the border, including another truck-mounted device discovered by Mexican authorities in 2013. However, the conspicuous appearance of such contraptions, combined with the substantial amount of effort they likely take to build and operate, make it unlikely that machines like these will come into widespread use by trafficking groups.

Using aircraft to fly drugs over the US border is nothing new for Mexico-based trafficking groups. Decades ago, the late Juarez Cartel kingpin Amado Carrillo Fuentes earned the nickname "Lord of the Skies” ("El Señor de los Cielos") for the fleet of small airplanes his organization used to ferry drugs from Mexico to the United States. More recently, however, trafficking groups have begun to use “ultralight” aircraft in fly-by-night operations. These machines are much smaller and slower than their full-size counterparts, and due to their limited range they are typically used for recreation rather than transportation. But crime groups have begun outfitting ultralight aircraft with special equipment like all-terrain landing gear and extra cargo space to enhance their ability to stealthily carry illicit loads over the border.

Ultralight aircraft typically fly relatively lower to the ground, which -- along with their small size -- makes them difficult to detect. And in addition to requiring relatively little training to operate, they are fairly cheap and easy to construct, increasing their appeal for traffickers. Moreover, these vehicles can carry hundreds of pounds of drugs at a time. These advantages make ultralights an economical option for enterprising smugglers, and authorities expect their use in drug trafficking to continue, or even increase, in the future.

The rapid growth in the market for commercially produced unmanned aircraft systems, commonly referred to as “drones,” has been accompanied by a simultaneous increase in their use by drug smugglers. In August 2015, two men pleaded guilty in US court to receiving a package of 28 pounds of heroin that was flown across the border from Mexico using a drone. Federal authorities told the Los Angeles Times that the case was “the first cross-border seizure by US law enforcement involving the new smuggle-by-air tactic.” Earlier that year, a drone carrying six pounds of methamphetamine crashed in Mexico just south of the US border. And according to Popular Mechanics, there had reportedly been more than one hundred similar attempts during previous years to use drones to carry drugs over the border.

Still, officials say that drone-based drug trafficking has its limitations. US Drug Enforcement Administration (DEA) spokesperson Amy Roderick told the Los Angeles Times in 2015 that drones “will only allow a small amount of drugs to be flown at a time, and that coupled with the ease of detection, does not make this method very profitable to these drug trafficking organizations whose motivation is money.”

The Jalisco Cartel New Generation, which has rapidly expanded to become Mexico's greatest criminal threat, may now be spreading its…

Mexican authorities crushed 23 "narco-tanks," while 630 armored vehicles have been confiscated since 2018.