A recent UN report shows that, in Colombia, the farming of coca for illicit use has not only increased, but has potentially also had significant adverse effects on community workers.

The regions of Colombia where coca cultivation has intensified are the most dangerous for human rights activists and social leaders, according to combined data from the United Nations Office on Drugs and Crime (UNODC) and 18 months’ worth of reports on murdered activists.

*This article was originally published by Verdad Abierta. It was translated, edited for clarity and reprinted with permission, but does not necessarily reflect the views of InSight Crime. See Spanish version here.

The UNODC report revealed a rise from 146,000 hectares to 171,000 hectares used for illicit coca farming during 2017. At least 64 percent of that increase occurred in the departments of Antioquia, Putumayo, Norte de Santander and Cauca.

Cultivation in Antioquia department is concentrated in the north and in the Bajo Cauca region (northeast), where public security is known to be highly unstable. More than 80 percent of Antioquia’s illicit crops are located there, and they grew from 8,855 hectares to 13,681 hectares last year. 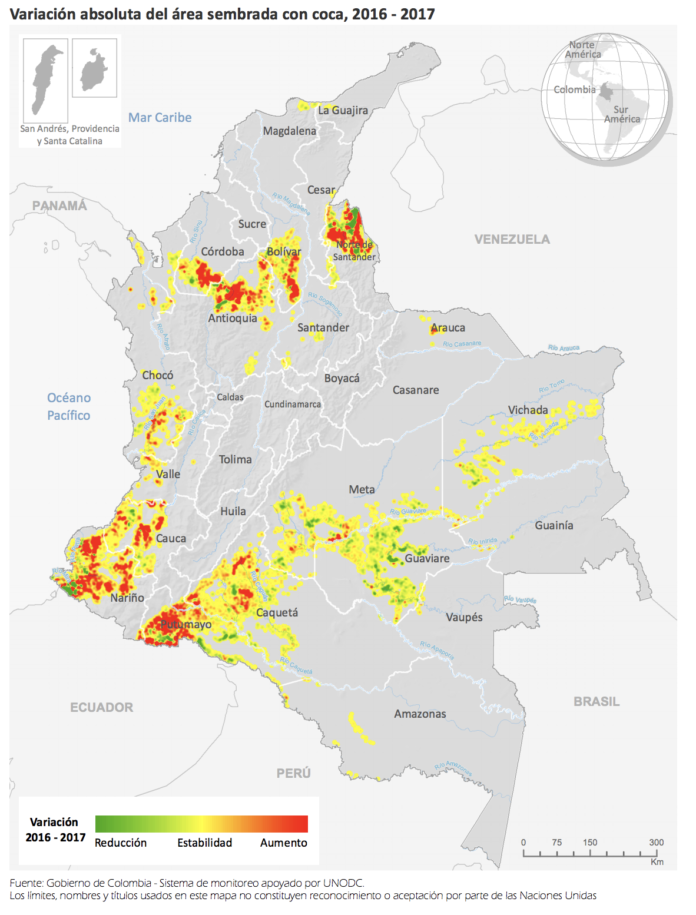 Moreover, the border between north Antioquia and Bajo Cauca, and southern Córdoba department, is seeing an ongoing violent confrontation between the structures left behind by paramilitary groups and dissidents from the Revolutionary Armed Forces of Colombia (Fuerzas Armadas Revolucionarias de Colombia – FARC). The conflict has sent human rights violation figures skyrocketing.

Reports from the Medellín Mayor’s Office indicate that during the first half of 2017, just over 1,200 families (3,400 people) arrived to the city, displaced by violence in Antioquia’s northern regions.

The Antioquian branch of the Colombia-Europe-United States Coordination Group (Coordinación Colombia-Europa-Estados Unidos – CCEEU) reported that, between January and July 2018, attacks against activists increased significantly nationwide, from 117 to 173 incidents within a six-month period. And the most worrying growth in activist murder rates occurred in north Antioquia and Bajo Cauca, with a total of 11 social leaders assassinated.

But the increase alone is not the only concern. In analyzing the combined data, an important shared characteristic among the activist murder victims emerges. They are linked to programs closely related to implementation of the peace agreement between the Colombian government and the FARC, especially programs like the National Comprehensive Program for the Substitution of Illicit Crops (Programa Nacional Integral de Sustitución de Cultivos de Uso Ilícito – PNIS) and the Territory-Focused Development Programs (Programas de Desarrollo con Enfoque Territorial – PDET). The creation and implementation of the PNIS and PDET were included in the peace agreement signed by the government and the FARC in Bogotá on November 24, 2016.

Similar situations have developed outside of Antioquia as well. In Colombia’s southwestern department of Cauca, which has the fourth highest illicit crop presence in the country, the UNODC also reported an increase in the amount of land used for growing coca. This jumped from 12,595 hectares to 15,960 hectares in 2017. Sadly, the same department registered the highest number of homicides committed against community and social leaders in Colombia for the first half of 2018. A total of 13 were killed.

Nariño department shares Colombia’s Pacific coast with Cauca and holds the country’s top position for coca crop presence at 45,735 hectares for 2017. Meanwhile, in north Colombia at the Venezuelan border, Norte de Santander department has the third highest presence with 28,244 hectares. Violence against advocates and community leaders was also a common factor between these two departments. Human rights organization Somos Defensores reported that in the first half of 2018, four social leaders were killed in Nariño. These leaders worked to defend their territories, and also came from coastal towns where illicit cultivation is particularly heavy. Three of the four victims were from Tumaco, which contains 19,571 hectares of illicit crops, making it the municipality with the highest amount in both Nariño and Colombia. The other victim was from Olaya Herrera.

Somos Defensores said that the violence in Norte de Santander department took the lives of 10 activists during the same period. Six of the killings occurred in the troubled region of Catatumbo, where guerrillas from the National Liberation Army (Ejército de Liberación Nacional – ELN) and dissident guerrillas from the now demobilized Popular Liberation Army (Ejército Popular de Liberación – EPL) are engaged in an armed dispute.

While presenting their report, UNODC spokespeople pointed out that the FARC’s exit from Colombia’s conflict triggered profound changes in territories where coca is farmed. For decades, the FARC regulated both the market for coca base -- a precursor for cocaine that is created using coca leaves -- as well as the number of hectares to be cultivated with coca. They also imposed rules of conduct that farmers had to follow or otherwise face punishment, expulsion from the territory or death.

Now, however, the FARC has laid down its weapons and become the Common Alternative Revolutionary Force (Fuerza Alternativa Revolucionaria del Común – FARC) political party. Presented with an opportunity to fill the power vacuum, new armed actors have been entering the territories the FARC guerrillas once controlled and are attempting to act as the new market regulators. But their competition has turned violent, and farming, indigenous and Afro-Colombian communities are getting caught in the crossfire. The most dramatic cases have centered around rural communities that have implemented the PNIS.

Colombian think tank Ideas for Peace Foundation (Fundación Ideas Para la Paz – FIP) stated that between January 2017 and June 2018, a total of 36 rural inhabitants who had promoted peace agreement programs in their communities were killed. And according to the National Coordinator of Coca, Poppy and Marijuana Farmers (Coordinadora Nacional de Cultivadores de Coca, Amapola y Marihuana – COCCAM), most of the killings took place in Cauca and Nariño departments, 12 in the former and 11 in the latter. Illicit crop farming grew in both departments in 2017.

FIP also explained that, in 51 towns that implemented the PNIS, homicide rates grew by 40 percent during the first six months of 2018 compared to the same period last year. This jump was much higher than in towns without the PNIS, which saw increases of three percent.

The think tank indicated that the dramatic increase in the farming of coca for illicit use is not the only factor behind the violence.

FIP said that “without a doubt, economic motives hold significant weight, but what happened in these parts of the country must also be understood based on the delays and problems with the reincorporation process, the government’s inability to maintain effective and permanent presence, and difficulties with implementing security guarantees.”

*This article was originally published by Verdad Abierta. It was translated, edited for clarity and reprinted with permission, but does not necessarily reflect the views of InSight Crime. See Spanish version here.

In Colombia, the ELN Want a Peace Process on Their Terms

The ELN have stated their will to engage in peace talks with the upcoming administration of Colombia's president-elect Gustavo Petro,…