After US Sentencing, Colombia's Top Paramilitary Braces for Next Legal Battle

The recent US sentencing of Salvatore Mancuso, Colombia's former paramilitary commander-in-chief, ends years of backroom negotiations but it did not answer the next question in his landmark case: whether Mancuso should get credit for meeting his obligations in Colombia's paramilitary demobilization process.

Mancuso was sentenced by Judge Ellen S. Huvelle in a District of Columbia court judge to 15 years in a US prison for drug trafficking on June 30.

Huvelle had a difficult task. To US courts, Mancuso is seen as a drug trafficker for one of the largest drug syndicates the world has ever seen, the United Self-Defense Forces of Colombia (Autodefensas Unidas de Colombia - AUC).

To Colombians, he is the face of a brutal civil war. The AUC doubled in size while acting as the Colombian government’s proxy army against leftist rebels for two decades. Mancuso made his name torturing and killing hundreds, and displacing thousands more who he once openly described as guerrilla sympathizers.

The US indicted Mancuso for drug trafficking in 2002. The AUC then brokered a deal to demobilize its forces in 2004, and Mancuso was one of the first to hand himself in to authorities, presumably to avoid facing charges in the US. However, after he and others were accused of breaking the conditions of the demobilization deal, he was extradited in 2008 to the US to face the drug trafficking charges. 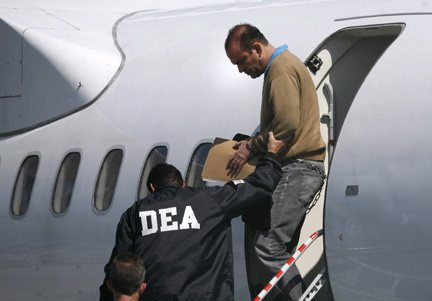 Mancuso, during his extradition to the US in 2008

His sentencing culminates a seven-year negotiation in the US, which included an arduous back-and-forth regarding whether the US justice system can be used as a proxy court for a foreign peace process. The answer, even after all that wrangling, is not yet clear.

These are not trivial issues. Over the years, the US has become a de facto international court for human rights violators and war criminals like Mancuso. In the US, however, they are not being tried for violating international humanitarian law, but for charges like drug trafficking, money laundering and criminal conspiracy. In Mancuso’s case, he was charged in the US for violating Title 21 (manufacture and distributing illegal substance), Title 46 (possession with intent to distribute) and Title 18 (aiding and abetting).

The US trials can be thought of as a kind of substitute justice, especially when the war criminal is not facing charges in his own country or the government is unable or unwilling to prosecute the person. But this is not the situation in Mancuso's case. In Colombia, after he was extradited, he was condemned in Colombian court for mass murder, torture, forced displacement, kidnapping and other war crimes.

These crimes are not disputed. Mancuso's defense team acknowledges he is guilty in both countries, but it argues that he complied with the terms of the AUC's demobilization deal while in the US and should therefore receive the benefits of that deal. To be sure, according to Colombia’s Justice and Peace law -- the legal framework that allowed for the AUC's demobilization -- Mancuso would only serve eight years for these war crimes, in exchange for his complete and full testimony about his own and other's crimes.

And while in the US, Mancuso has provided particularly extensive confessionals about abuses committed during Colombia's conflict. Some of his testimony was even televised via short-circuit TV, from US courtrooms and jail cells. The question is how much credit should Colombia's justice system grant Mancuso, for participating in Colombia's Justice and Peace process from the US?

The same question was posed to the US prosecutors and Judge Huvelle. Mancuso's original plea deal with the US government includes mention of credit for his participation in the Justice and Peace process provided it "benefits both countries." And, on the surface, Mancuso's 15-year,10-month sentence, which was substantially less than the 30 years to life he could have received for his drug trafficking crimes, seems to be acknowledging this participation.

In their sentencing memo, in which they recommended to the judge a 22-year sentence, the prosecutors made a point of highlighting Mancuso’s assistance to the Colombian Justice and Peace process. They noted that his testimony led to numerous arrests and convictions, including convictions of a former military commander, a top intelligence official, a former police commander, and several politicians in Colombia.

For her part, Huvelle also appeared to be influenced by arguments made by the defense team, maintaining that Mancuso had provided what she called during the hearing "extensive" cooperation.

But while she seemed swayed by his participation in the Justice and Peace process, the judge's decision is not binding in a Colombian court. In addition, during the sentencing, Huvelle did not specifically mention Colombia's demobilization process, and she specifically stated that she did not want Mancuso to receive “double credit” for his participation in Colombia's Justice and Peace process from US soil. In other words, testimony he gave from the US does not necessarily count as Mancuso fulfilling his obligations to Justice and Peace (and subsequently seeing his prison time cut down in Colombia).

Huvelle's ruling is particularly strange for other reasons. Under normal circumstances, the only testimony that Mancuso could provide to the US justice system -- and expect to have it count as "substantial assistance" that would result in benefits, like a shorter prison sentence -- would be testimony relevant to US, not Colombian, cases.

US prosecutors even say as much in the original plea deal with Mancuso. “Only information that proves useful to investigations and prosecutions on behalf of the United States government will be considered for ‘substantial assistance,’” the plea deal states.

However, in their sentencing memorandum, prosecutors say that Mancuso was virtually useless when it came to providing helpful testimony for US cases. While he provided some assistance in a money laundering case, “no arrests, indictments, or convictions resulted” from this.

Nor did Mancuso serve as a witness in any other US case, according to Mancuso's lawyer. Even more evidence of Mancuso's scant cooperation became evident after the US government unsealed nearly all of his case files in April.

This issue has not yet been settled, and will raise some big questions for Mancuso's legal team moving forward. Depending on his conduct, Mancuso could be released from his US prison in four years and four months. But in Colombia, the question of whether he will receive additional benefits for spending time in a US prison remains an unsettled matter, and his US sentence says he could be extradited back to Colombia.

Why the FARC May Actually Mean What It Says About Kidnapping

The announcement that Colombia's FARC, the region's oldest and largest insurgency, would halt kidnappings was greeted with mixed emotions. But…