Colombia's Defense Minister has declared that the state has "already won" the battle to occupy the territories being left behind by the FARC guerrillas as the rebels demobilize. But the government looks more like the losing player in some areas, as heavily armed groups fight openly in strategic turf and, as InSight Crime investigations show, criminalized guerrilla factions are appearing all across the country.

"I think that we've already won the battle to occupy the territories left behind by the FARC," the defense minister said.

Villegas followed up by telling the news outlet that Colombia has launched public security force operations which allocate 80,000 troops to the temporary hamlet zones in which the FARC have gathered and are demobilizing.

But Villegas recognized that "there are still some difficult areas," referring to the Catatumbo region of the Norte de Santander department as well as the departments of Cauca, Chocó and Nariño. "But security forces are already there," he said.

When pushed on the topic of Catatumbo, where a police officer was recently killed, Villegas commented that "nobody has won [in Catatumbo] yet … but we have strengthened Catatumbo with 2,500 extra soldiers in the past two or three months."

If Villegas' remarks were true, they would imply that security forces are successfully preventing other illegal groups from filling the FARC's vacuum, which is simply not the case in numerous areas.

Currently among the greatest threats of the so-called "post-conflict" era is the emergence of FARC dissident elements, which InSight Crime has mapped below. 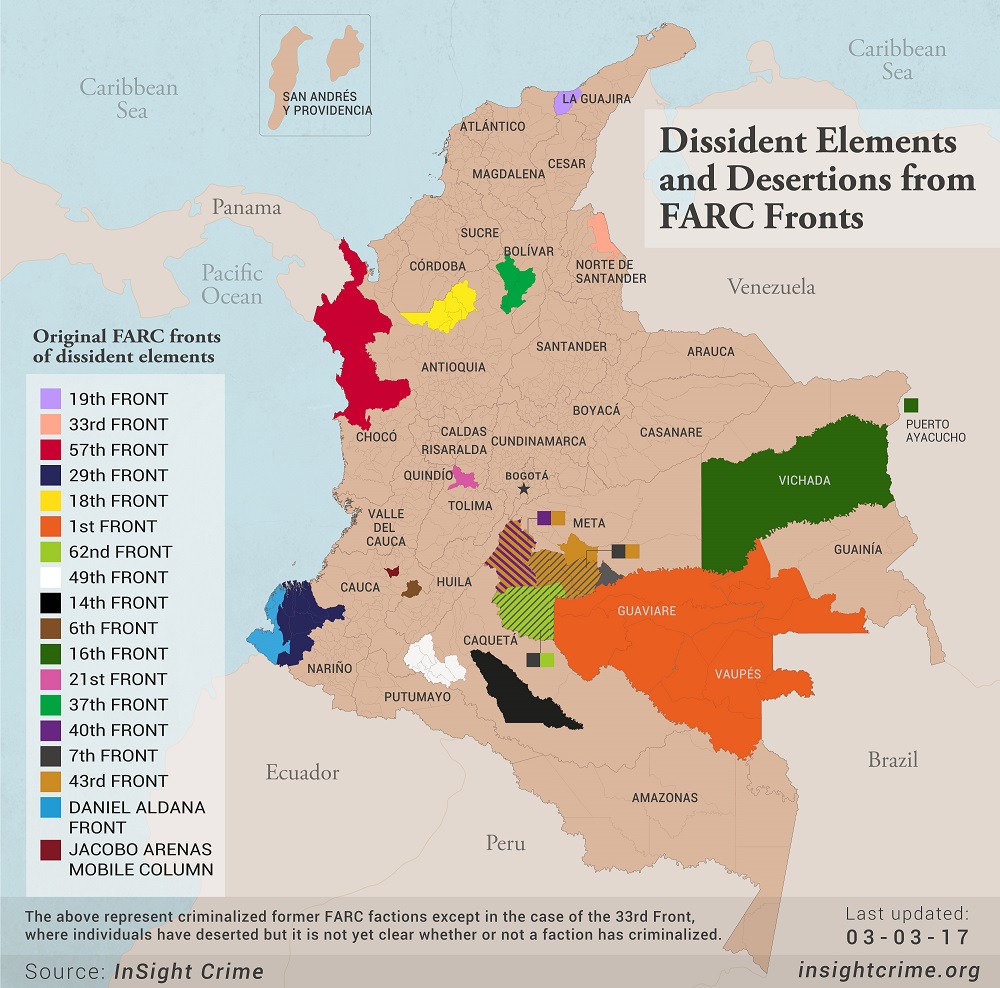 Many of the areas where FARC elements have gone rogue are prize criminal territories, where guerrilla splinter groups will continue to line their pockets with drug and illegal mining revenues, at times fighting other groups for control of the FARC's old economies.

But state forces are often on the sidelines of this battle over FARC turf. A prominent case is the Pacific town of Tumaco, Nariño, where former guerrillas are consolidating into rival drug trafficking structures and driving up the murder rate.

The violence in one sector became so extreme that the local community called for state authorities to intervene a few months ago. But it was ultimately the FARC who, in the middle of the bilateral ceasefire with the government, were obliged to step in and assassinate one of their most prominent dissidents, according to certain sources.

Another key indicator of armed actors -- including dissidents -- breaking into or strengthening their presence in an area is displacement. As groups expand into former FARC turf, they upset the relative stability that the guerrillas' hegemonic authority brought to the area, they exert violence on the community to establish control and battle other groups who challenge their dominion, causing civilians to flee en masse.

And in fact, displacement in Colombia appears to be rising.

It is ironic that Villegas' comments come alongside news of multiple such cases. Numerous families fled last February from Tibú, in Catatumbo, apparently due to the incursion of criminal organizations in this typical FARC stronghold.

Another mass displacement has just been registered in the community of Alto Baudó, Chocó, where the FARC has had a presence. This was attributed to clashes between National Liberation Army (Ejército de Liberación Nacional - ELN) guerrillas and the Urabeños. Indeed, the threat of fighting between these two groups resulted in a previous displacement that InSight Crime reported on in early 2016. This demonstrates that, despite clear warnings since at least August 2015 on the evolving situation in Alto Baudó, the state has not been able to ensure the security of the local community. Meanwhile, it is the ELN that has apparently garnered significant local power.

Alto Baudó is one of the municipalities where InSight Crime has detected rogue FARC elements. Although these were not necessarily involved in the displacements, they could well make the security situation even more volatile in future.

Furthermore, new security policies may have actually left some communities even less protected by state forces than before. Recent InSight Crime field investigations have found that the relocation of troops to protect the FARC's demobilization zones has left strategic drug corridors unmanned, in areas that are already seeing the incursion of new and violent armed actors.

Additionally, state institutions are not currently willing or capable of fully eliminating or replacing the lucrative illegal economies that are emboldening criminal actors and opening the door for such groups to oppress rural communities. Coca farmers such as those of Tibú and Tumaco who have long lived under the yoke of the FARC still lack viable, legal sources of income. Without alternative ways of making a living, these communities will almost inevitably come under the authority of the next criminal group to arrive, should it have more to offer them than state institutions.

To be sure, the occupation of old FARC areas is high on Colombia's list of priorities. Security forces have, to an extent, been planning out their future roles in the "post-conflict" era, and the state has promised to implement rural development and crop substitution programs. But it is too early for the government to be claiming victories when so much work is yet to be done.

InSight Crime has presented its latest report, Venezuela’s Cocaine Revolution, the result of three years of investigation by the Venezuelan…

Rebels from Colombia's second-largest guerrilla group have been demobilizing from the insurgency at nearly double last year's rate, adding weight…