Migrants on a moving train in Mexico
ANALYSIS

Criminal groups and corrupt officials are the main beneficiaries of a US inspired shift in Mexico's policy that is endangering migrants, according to a new report, and the recent US decision to allow more Central American immigrants refugee status will do little to protect them from abuse south of the Rio Grande.

Mexico's crackdown on undocumented migrants crossing its territory in hope of reaching the United States has forced them into "more costly, circuitous and dangerous channels," says the report (pdf) from the International Crisis Group (ICG), This policy has made migrants even more vulnerable to violence at the hands of organized crime.

The Zetas are the criminal network most active in the kidnapping and extortion of Central American migrants in Mexico. But some 20 percent of migrants reported having suffered “crimes at the hands of authorities, including robbery, extortion, beatings and illegal detentions,” according to a survey of 31,000 people by a Mexican non-profit that is quoted in the ICG report.

The number of migrants detained and deported by the Mexican government has increased dramatically in the last four years. This tough stance was in part due to US pressure to staunch a surge of Central American migrant children arriving at the US/Mexico border in 2014.

Mexico detained 190,366 undocumented migrants in 2015, compared to 66,583 in 2011. Nearly 90 percent of those migrants came from Central America countries, many fleeing criminal gang-related violence back home in the Northern Triangle countries of El Salvador, Honduras and Guatemala.

In fiscal 2015, Mexico returned 166,000 Central Americans to the isthmus, including some 30,000 children and adolescents, while the  United States deported more than 75,000. That forced repatriation has slowed this year to just over 57,000 between January and May (PDF), according to figures from Mexico’s Interior Ministry (Secretaria de Gobernacion - SEGOB). 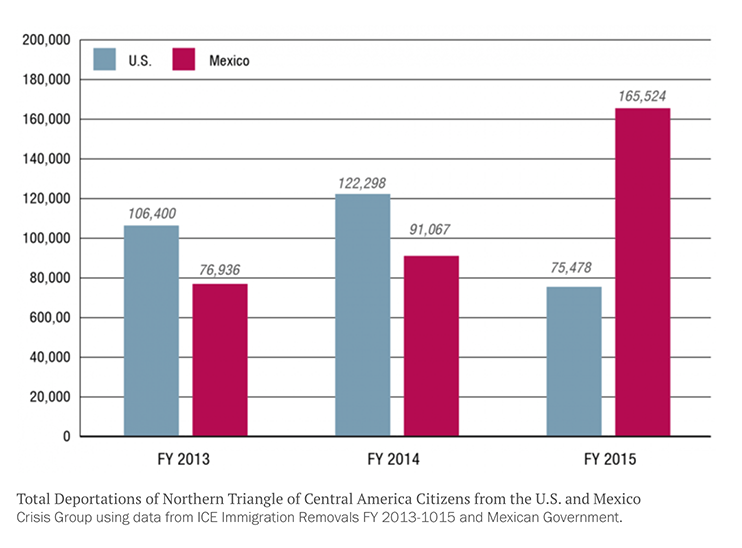 The ICG report warns that “beefed-up border control inadvertently fuels human smuggling and fortifies criminal gangs that increasingly control that industry." The Rev. Alejandro Solalinde, a Mexican Catholic priest and outspoken advocate for migrants in Mexico, said in a recent interview with news website SinEmbargo that it is organized crime that ultimately decides who crosses the Mexico-US border thanks to the complicity of authorities on both sides.

Women and children are especially vulnerable to sexual exploitation by criminal gangs, which create networks of sex workers, holding many women against their will. The sex industry at Mexico's border with Guatemala is a byproduct of the human trafficking industry, and criminal organizations also profit indirectly from the sex trade by charging for protection, ICG reports.

Human traffickers -- called coyotes or polleros -- who charge migrants to help them cross Mexico and enter the United States have been “subsumed, subordinated or used by networks dedicated to migrant kidnapping," according to Rodolfo Casillas, an expert on migration and organized crime quoted in the report. Smugglers and their clients have to pay between $600 and $1,000 in protection fees to organized crime groups for each migrant, and those who cannot pay are often kidnapped, the report says. Mexico’s Human Rights Commission (Comisión Nacional de los Derechos Humanos - CNDH) said in 2013 that 11,000 migrants are kidnapped every year.

The report also notes that Mexico is increasingly becoming a destination, rather than a transit country, for Central American migrants. It says asylum applications in Mexico have more than doubled and more are being approved. Still, the vast majority of crimes against migrants go unprosecuted.

The US State Department announced plans on July 26 to expand its existing program allowing Central American minors to enter the US as refugees to include the children's families, a move that prompted criticism from the Republican Party, reports the New York Times.

The United States also entered into a partnership with Costa Rica under which that country will serve as a host for migrants whose asylum applications are being processed. With help from The United Nations High Commissioner for Refugees (UNHCR) and the International Organization for Migration (IOM), the United States will also start processing applications in the applicants' country of origin in cases involving minors and their families, an attempt to dissuade them from making the dangerous journey north across Mexico.

The violence visited on migrants in Mexico by the Zetas and other organized crime groups is nothing new. In August 2010, 72 Central American migrants were murdered at a ranch in San Fernando, Tamaulipas. Several possible motives for the massacre have been reported, including the migrants lack of money to pay protection fees or refusal to work for the criminal organization. Reports of migrants being killed, kidnapped and extorted continue to be common.

Until 2014, Mexican authorities largely turned a blind eye to the flow of migrants from the Northern Triangle passing through their territory, despite widespread media attention focused on the northbound freight trains migrants cling precariously to, known collectively as “la bestia" (the beast). Thousands of migrants have been killed or maimed falling under the wheels of these trains.

Most migrants who risk riding the trains are charged a tax by the Zetas, or opportunists claiming to work for the group, and some are thrown off if they can’t pay. There have also been reports of the Zetas trying to recruit Central American migrants into their ranks.

Unlike most of Mexico's criminal organizations, the Zetas focus more on violent enforcement and protection rackets than drug trafficking. The group, started by special forces officers who defected from the Mexican military, specializes in “taxing” other criminal organizations for operating in Zeta-controlled territory.

When children from Central America began to surge across the Mexico-US border in 2014, President Enrique Peña Nieto came under pressure to stem the flow from the Obama administration.

Mexico’s federal government launched the “Frontera Sur” crackdown, which involved immigration officials backed by the Federal Police and the army hauling migrants off the trains and pulling them from buses and the cheap hotels they patronize, reported the Los Angeles Times. Mexico started to detain and deport more migrants than the United States as a result, stopping them before they could get to the border. To avoid detection, many migrants have stopped riding the trains and and are taking less visible routes which actually increase their vulnerability to various forms of abuse and exploitation.

It’s unlikely the changes to US policy on Central American migrants will have much impact on the crimes perpetrated against migrants in Mexican territory.

"It's a positive step, but [it's] difficult to see how it could be scaled up sufficiently to offer protection to the large numbers of people who need it, and it doesn't address the problems in Mexico,” Mary Speck, author of the ICG report, told InSight Crime via email.

The ICG report urges the United States to establish processing centers for asylum seekers in Mexico and Central America to prevent them from risking the dangerous journey to the border. ICG also urges Mexico, once again, to end the impunity enjoyed by organized crime and corrupt officials who exploit migrants in that country.

Cyclones, Scorpions and Old School Killers - The War for Tamaulipas

It was so simple once. The Gulf Cartel and its ancestors maintained control of Tamaulipas for eight decades.

The Zetas Take to the Air

With the second seizure of a large-scale radio system belonging to Mexicos Zetas, its clear that the group has established…