Death of a Colombian Narco-Guerrilla?

Rumors are swirling that the leader of a splinter rebel group, dedicated to drug trafficking along the border with Venezuela, has been killed in an offensive by the security forces.

In a joint operation by members of the attorney general’s office, the police and the military, Victor Ramon Navarro Cervano, alias “Megateo,” is believed to have been killed in the municipality of Hacari in Norte de Santander department, which borders Venezuela. Megateo was the last leader of the now-defunct People’s Liberation Army (EPL). Most of the EPL demobilized in 1991, but several dissident units stayed in the field, the last one now being the "Libardo Mora Toro" Front, which Megateo led.

The operation against what was believed to be the EPL’s main camp started at about 4 a.m. Sunday morning, when up to 300 members of the army special forces and the police elite “Jungla” unit moved into the area, clashing with guerrillas. It is believed that they found several bodies after the combat, and that one of them may be Megateo. One report stated that Megateo was killed by an army sniper, but that his bodyguards managed to carry his corpse out of the battle zone.

Megateo’s empire lies in the area of Catatumbo, one of Colombia's principle hubs for coca and drug smuggling. Several major armed groups are present here, with EPL rebels operating alongside the guerrillas of the Revolutionary Armed Forces of Colombia (FARC), the National Liberation Army (ELN), and neo-paramilitary drug trafficking groups the Urabeños and Rastrojos (groups which are known as "BACRIM," from the Spanish term for "criminal bands"). 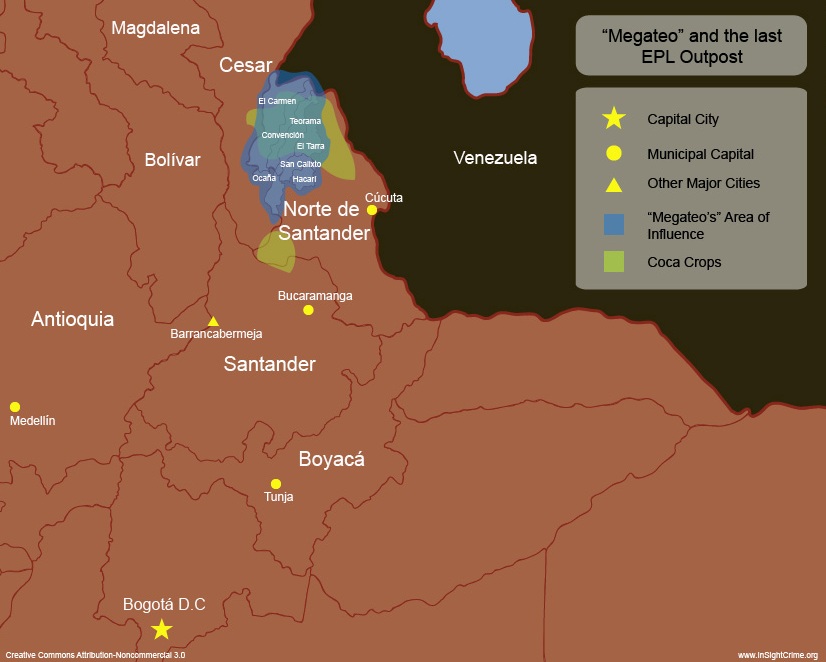 Why is Megateo so Important?

While the EPL in its day was not known for its involvement in the drug trade, Megateo turned himself into a major drug broker along the border with Venezuela. The secret to his success was his ability to act as a broker between different rebel and BACRIM factions, which have historically fought each other. He is thought to have taken over the EPL front in 2003 after his boss, alias "Manuel," was captured in Bogota.

Megateo initially secured the unit’s survival via an alliance with the ELN, handling the drug trade for them. The ELN historically sought to keep their distance from drugs on ideological grounds, although that is no longer the case. An EPL agreement with the FARC was soon to follow, and by 2007, Megateo had turned his small group of some 50 fighters into a rich drug trafficking hub. By 2011, Megateo had also forged agreements with the Rastrojos and the Urabeños. As a result, his EPL front was able to bring in coca base from a variety of sources, process it into cocaine, and then smuggle it onwards, usually into Venezuela, up to two tons every month.

In the one interview Megateo  granted to Semana magazine in 2013, he denied involvement in the drug trade, admitting only to imposing taxes on the coca base trade -- a paste produced after harvesting coca leaves, which is later processed into cocaine.

“We the EPL are involved in coca, but not in drug trafficking. We charge a tax on drugs, 400,000 pesos per kilo [then around US$200]. It is a vile lie that we control 30 laboratories or receive drugs from the FARC and ELN,” Megateo told Semana.

However, the US believe Megateo is so important in the drug trade that in 2014, he made it onto the US Treasury Department's so-called Kingpin list. The US Narcotics Reward Program offers up to $5 million for information leading to Megateo's arrest or conviction, the same reward offered for Joaquin “El Chapo” Guzman of Mexico’s Sinaloa Cartel, acknowledged as one of the world’s most wanted drug traffickers.

The alleged killing of Megateo would also be a major victory for the Colombian security forces. Another reason for Megateo’s notoriety was the April 2006 ambush of a joint security operation, involving the army and now-disbanded intelligence agency the DAS. After a DAS informant on Megateo's payroll warned the guerilla leader of the patrol, the EPL -- with some help from the FARC -- killed ten DAS detectives and seven soldiers in a surprise attack.

However, this is not the first time the army has believed Megateo was killed. In 2003, then-5th Brigade Commander General Jairo Duvan Pineda stated that intelligence showed that Megateo had been killed by the FARC.

One of the main reasons that Megateo has been able to remain at large for so long has been support from local communities in Catatumbo, in the nine municipalities where the EPL has influence. One of these is San Calixto, where Megateo was born 39 years ago, and where he has become a legendary figure.

Thanks to early warnings from his network of informants, Megateo has managed to evade every operation intended to capture or kill him. In September 2012, 14 of his collaborators were arrested during an operation planned with DEA intelligence. However, Megateo managed to slip away, apparently using a tunnel system.

His fascination with gold is well known. He has been photographed wearing gold chains, one with a golden gun amulet as well as heavy gold bracelets on his wrists. On his fingers he has two gold rings, one encrusted with diamonds, and the other with emeralds.

There have also been stories of Megateo maintaining a harem of women, many of whom had to get tattoos identifying themselves as his “property." Another tale talks of 10 prostitutes, each earning more than $3000, who attended a recent birthday party.

His alleged girlfriend, Yanith del Socorro Selveda Quintero, alias “Jaqueline” (pictured below), was arrested in June 2012 in possession of 432 kilos of coca base and three assault rifles.  With an extradition order pending, Jaqueline was accused of running land and sea routes for cocaine shipments via Venezuela and the Caribbean and of helping Megateo launder more than $4 million in drug earnings. 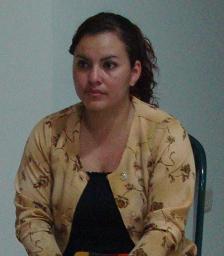 The End of the EPL?

If Megateo is dead, the EPL may go with him. While the other holdout factions of the EPL have long since disappeared, Megateo was able to keep his group well supplied and with plenty of recruits, thanks to his charisma and the wealth generated from drug trafficking. Thanks to his personality and his generosity, he was able secure support in many of the local communities where his rebels operate.

There has been no mention of who might assume command of the EPL remnants if Megateo is indeed dead. If there is no charismatic candidate within the ranks of this rebel group, then there is a risk that the ELN or FARC, which operate alongside the EPL in Catatumbo, may seek to take over Megateo’s territory and perhaps his lucrative drug smuggling operations.

One of the issues that InSight Crime is currently exploring is the risk that FARC units remain involved in criminal activities, should a peace agreement be signed. The FARC and the government have been in peace talks in Havana, Cuba since late 2012, and there are indications that talks with the ELN might soon start in Ecuador (Megateo wanted to be included in the dialogue, but his requests found no support with the Colombian government).

Megateo's drug trafficking model might inspire FARC front commanders uninterested in the peace process, as that would involve moving away from the  criminal economies that they control, including the coca and cocaine trade, and illegal mining and extortion rackets. For more than a decade, Megateo has defied the Colombian and US governments and generated a fortune estimated in the tens of millions of dollars. This is certainly an attractive option for the FARC and ELN commanders who have spent their entire lives involved in armed struggle and control multi-million dollar criminal empires.

While Latin America is home to the trafficking of all manner of species, several foundations are working to save arguably…