Former Honduras President Porfirio Lobo denied rumors that he had turned himself in to United States authorities or was facing extradition from Honduras to face charges of drug trafficking in the United States.

Social media ran rampant over the weekend with rumors that Lobo was the latest of many Honduran elites who have gone or will be going to the US to face justice.

"The list," as some media referred to it, was a group of four former officials of the Lobo administration (2010-2014), according to a report by El Heraldo on March 5. No one was named in the story -- which included cryptic references to the ex-officials -- and Supreme Court President Rolando Argueta reportedly told the paper the court "will analyze" the cases. In all, there are six extradition requests pending and four of those subjects are fugitives, Security Ministery and retired General Julián Pacheco told the press on March 29.

Lobo communicated with a radio station and used his Facebook page to deny the rumors.

"My career will never be marred by illicit acts. Honesty, integrity and rectitude characterize me where ever I am," the former president wrote on his personal profile on March 28. "The political arena is on fire, and topics such as denigrating people are the order of the day. Personally, these mediatic acts are of no concern to me."

In a separate line of investigation, Honduras has reportedly asked for the extradition of a former Olimpia soccer club coach, the Argentine Danilo Tosello, to face charges in a money laundering case. A report in El Heraldo says that Tosello moved money from corruption schemes for "the wife of a high ranking former  Presidential House official," without specifying who. Tosello's stint as coach overlapped with the Lobo administration. In a radio interview, Tosello denied the accusations.

The rumors feed into an already tense atmosphere in Honduras. In October 2015, the US Justice Department formally accused three members of the powerful Rosenthal clan, including family patriarch and former Vice President Jaime Rosenthal, of laundering drug trafficking and corruption proceeds. A family lawyer was accused as well. On March 28, the US Justice Department said that former Honduras President Rafael Callejas had plead guilty to racketeering and corruption charges in the case involving bribes for media rights for FIFA World Cup qualifying matches.

What's more, members of Lobo’s family have come under scrutiny over the years for alleged connections to underworld figures. Lobo’s son, Fabio Lobo Lobo, was arrested in Haiti in 2015 and taken to the US to face charges of drug trafficking. He is alleged to have connections to the Rivera Maradiaga family, whose criminal organization, the Cachiros, was once one of Honduras’ most formidable.

At least two Rivera Maradiaga family members handed themselves in to US authorities in January and presumably provided the information that ensnared Fabio Lobo in the US judicial net.

Following the arrest of his son, Porfirio Lobo adopted a stern fatherly attitude: “If he is guilty, he must answer to the law.”

Ramón Lobo, Porfirio’s brother, has also been linked to the Rivera Maradiaga family. In 2012, Ramon Lobo attended the inauguration of the Rivera Maradiaga’s gas station and mini-mall on the outskirts of Tocoa, Colón, the Cachiros’ long-time headquarters in a remote region of northeastern Honduras.

Ramón’s daughter, Margarita, was linked romantically to a major criminal figure, Jorge Aníbal Echeverría Ramos, alias “El Coque,” after she was injured in a 2004 attack on El Coque in San Pedro Sula. Both Margarita and El Coque escaped with their lives.

El Coque fled to Cuba and then to Costa Rica, where gunmen -- presumably from the Cachiros -- again went after him. He survived a second time but was soon captured in Panama and sent back to Honduras, where he was killed after just three days in jail.

Most recently, a photograph of Porfirio Lobo posing with the now slain drug trafficker José Natividad "Chepe" Luna when Lobo was president of Honduras has raised more questions about the Lobo family’s connections to the underworld. 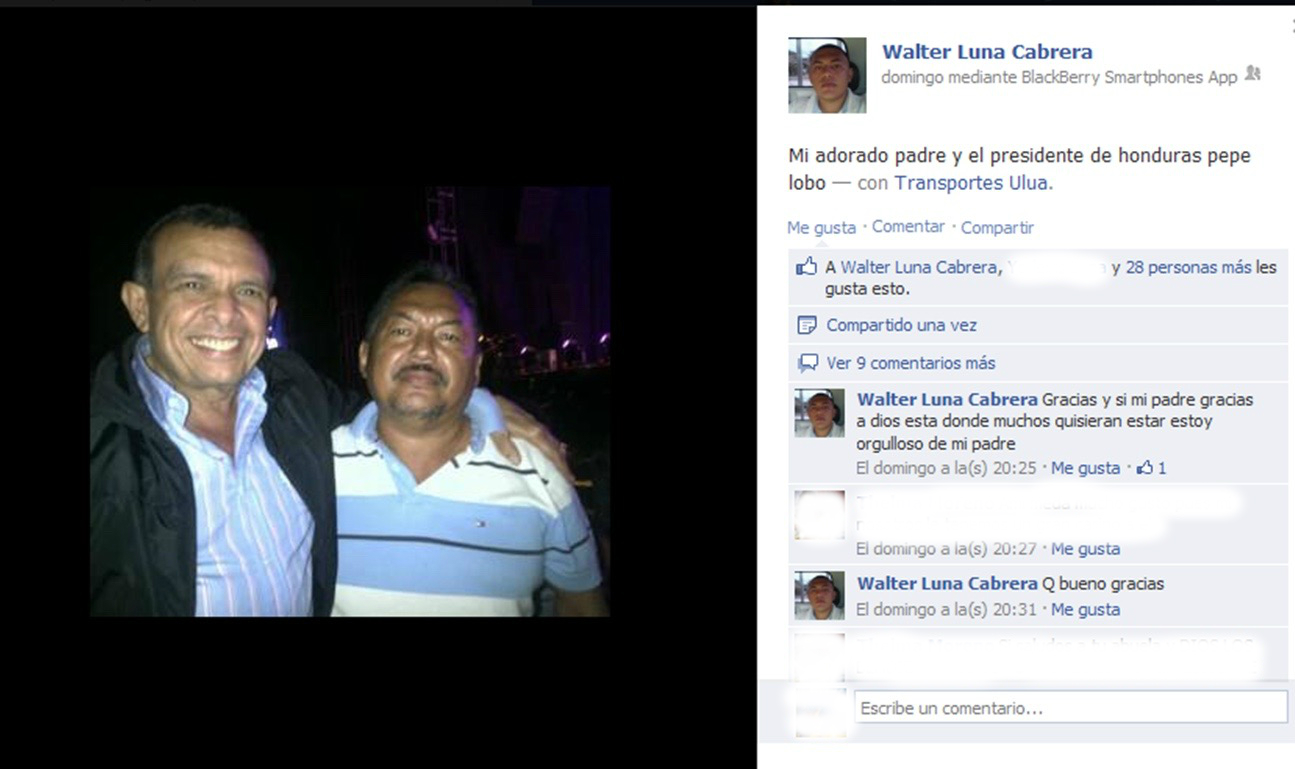 The photograph appeared on the Facebook page of Luna’s son, Walter Luna Cabrera, a few years ago and was obtained by InSight Crime only recently. It shows then President Lobo with his arm around Chepe Luna in what appears to be a festive atmosphere.

The caption, written by Luna’s son, reads: “My beloved father with the president of Honduras Pepe Lobo,” and provides a link to Luna’s transport company Transportes Ulúa.

“My father, thank God, is where many would wish to be,” Walter Luna wrote in a comment box below the photo. “I am very proud of my father.”

Lobo did not respond to InSight Crime’s repeated efforts for comment via social media or telephone on the context of the photo and the relationship he had, if any, with Luna.

Transportes Ulúa, Luna’s bus company, also did not respond to InSight Crime’s efforts to understand more about the context of the photo.

According to Luna’s daughter, however, the photograph was taken at a Marco Antonio Solís concert in Tegucigalpa. Lobo, and his wife Rosa Elena de Lobo, attended a Solís concert on May 22, 2011. The concert was part of a benefit for a government program that gives shoes to poor children in Honduras.

"I don't know what kind of relationship they had," Cecibel Luna told InSight Crime via Facebook. "I think that, really, it was a coincidence."

The date and the context are crucial since Luna was arrested in Honduras on August 7, 2012, while Lobo was still president. The alleged drug trafficker had established a base in San Pedro Sula following the arrests and prosecution of several of his cohorts in the Perrones organization in El Salvador beginning in 2008.

Interpol, the United States and El Salvador all had issued arrest warrants for Luna, yet he operated with impunity in Honduras until that August day when authorities arrested him on a charge stemming from a 1998 human trafficking case in Honduras.

US and Salvadoran authorities scrambled to get Luna deported to face charges in El Salvador, a US anti-drug agent told InSight Crime, a move that presumably would open the possibility of his extradition to the United States. At the time, Honduras was not extraditing any nationals, and Luna had dual Salvadoran-Honduran citizenship.

However, the Supreme Court released Luna after his lawyers presented a habeas corpus request. The president of the court called it a “purely administrative” decision, but US and Salvadoran authorities were furious, the US agent told InSight Crime.

Luna was notorious for his ability to escape prosecution. He was arrested in 2002 in El Salvador for assaulting a police officer but was quickly released. After the US indicted him in 2004 for drug smuggling and human trafficking, Salvadoran authorities failed in at least four attempts to capture him. In 2007, he was reportedly detained by Honduran authorities, only to be released.

After several years of maintaining a low profile in Honduras, Luna’s name began to circulate in the underworld again around 2012. Some of his Perrones cohorts had been released from prison in El Salvador, and Luna was reportedly helping to reconfigure the group from Honduras.

Luna’s arrest and release seemed to slow him down and force him underground again. He was gunned down two years later by suspected gang members in a case that remains unsolved.

For his part, Lobo has kept mostly quiet since he left office, aside from the occasional Facebook post and low key public appearances. Lobo's son, meanwhile, remains behind bars but does not appear ready to fully accept any role in drug trafficking. In January, according a court transcript obtained by La Prensa, he told a US judge that he had made mistakes but added, "There was never any drugs. There was never anything."

President-elect Joe Biden has a chance to reset the table on US-Latin American relations, but the Donald Trump administration’s schizophrenic,…