A slew of media reports from Venezuela appear to show an elite police unit, blamed for numerous extrajudicial executions, going after two of the country's powerful criminal organizations in recent months.

According to a review of open media sources carried out by InSight Crime, Venezuelan media reported 88 members of the Tren de Aragua and Tren del Llano megabandas (criminal gangs with at least 100 members) being killed at the hands of the Special Action Forces (Fuerza de Acciones Especiales - FAES), a unit within Venezuela’s national police force, between January and November 2019.

InSight Crime has not been able to independently verify the nature or the number of these killings but the amount and frequency of these reports points to a significant trend.

The most lethal incidents were reported by El Pitazo in August when the FAES allegedly killed 26 people linked to Tren del Aragua and Tren del Llano in a single week between the states of Aragua and Guárico. This followed a video which circulated on social media, seemingly showing several Tren del Llano gang members firing weapons into the air in Altagracia de Orituco, Guárico.

In November, two members of Tren del Aragua were reportedly gunned down in a clash with the FAES in Los Teques, capital of the state of Miranda, reported Tenemos Noticias.

While the majority of these cases were reported as clashes between police and gang members, a report published in June by the Office of the United Nations High Commissioner for Human Rights blamed the FAES for "shockingly high" extrajudicial killings.

"The incidence of alleged extrajudicial killings by security forces, particularly the special forces (FAES), in the context of security operations has been shockingly high," read the UN report. "In 2018, the Government registered 5,287 killings, purportedly for “resistance to authority,” during such operations. Between 1 January and 19 May this year, another 1,569 people were killed, according to Government figures. Other sources suggest the figures may be much higher."

The FAES unit was created by President Nicolás Maduro after the 2017 anti-government protests. The unit, designated to fight crime, has been accused of multiple human rights abuses. 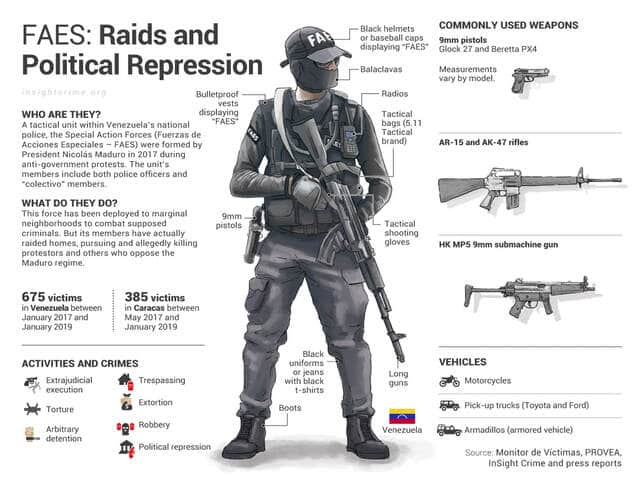 The motive for this purported crackdown by the FAES on these megabandas is uncertain. El Tren de Aragua expanded rapidly in 2019, increasing its domestic presence in Venezuela as well as abroad in Brazil, Colombia and Peru. El Tren del Llano has been quieter since the 2016 killing of leader José Antonio Tovar Colina, although may be seeing a revival under Gilberto Malony Hernández, alias “Malony."

It is unlikely that the FAES' actions will result in a prolonged decrease in organized crime. A recent report by Reuters found that police violence in Venezuela is designed more to instill fear and social control than to combat crime.


The FAES’ selective and bloody actions against the gangs may have a more specific mission in mind: to displace the criminal groups and assert control of their territories and illegal economies.

This analysis is based on the fact that the FAES maintains ties with the criminal underworld. Some of its most notable officials belong to “colectivos,” reported Efecto Cocuyo, paramilitary groups linked to the Venezuelan government and known to participate in criminal activities such as extortion and kidnapping.

The current FAES director, José Miguel Domínguez Ramírez, may be evidence of this relationship. Appointed in May 2019, Domínguez Ramírez has been named as an alleged member of the Continente colectivo by RunRun.es. He has also been sanctioned by the United States for suppressing dissent and stopping humanitarian aid from reaching Venezuela.