The FARC now appear to be turning on each other
ANALYSIS

Amid increasing desertion, two rival groups of FARC rebels clashed leaving two dead, a clear violation of the ceasefire and evidence that the rebel movement is breaking apart even as the peace process enters its implementation phase.

The peace deal signed between the government of President Juan Manuel Santos and the Revolutionary Armed Forces of Colombia (Fuerzas Armadas Revolucionarias de Colombia - FARC) in November 2016 is not going according to plan.

By now the guerrillas were supposed to be in concentration zones (called Transitory Hamlet Zones for Normalization - "Zonas Veredales Transitoria de Normalización") under United Nations supervision, preparing to hand over weapons and beginning training and education programs for reinsertion into civilian life. However, delays by the government in sorting out the zones and putting in basic infrastructure for the rebels are prompting further desertion as the FARC breaks apart.

On January 10, combat was reported in the municipality of San Vicente del Caguán in the southern department of Caquetá. Sources in the People's Defender's Office (Defensoría del Pueblo) indicated that FARC rebels from the 14th Front and the Teófilo Forero Mobile Column exchanged gunfire, leaving two dead.

The military has confirmed the skirmish and released a communique: "It is a violation of the ceasefire by the FARC, the use of arms, albeit against a dissident faction, and it is the duty of the Armed Forces to pursue all of those who commit a crime."

The dissident faction mentioned in the communique is the 14th Front, which under its leader Wilson Peña Maje, alias "El Mojoso," is believed to have come out against the peace deal. The 14th Front is one of the more powerful fighting units in the FARC's "Southern Bloc," one of the rebel army's six fighting divisions.

The other unit involved in the clash, the loyalist Teófilo Forero Mobile Column is a rebel "special forces" unit. During the failed peace process that lasted from 1999 to 2002, the Teófilo column was responsible for the security for the FARC's ruling body, the Secretariat.  This controversial unit has also been linked to several high profile attacks in different parts of the country, including one against the most exclusive social club in Bogotá, El Nogal, which was destroyed by a car bomb in February 2003 that left 36 people dead and some 200 injured.

The defection of elements of the 14th Front is just the latest in a long list of rebel units refusing to adhere to the peace agreement. At the moment, InSight Crime assesses that dissident factions appear in the following units: the 1st Front in Guaviare, which proclaimed itself dissident in July 2016 and which has acted as a lightning rod for disaffected guerrilla elements on Colombia's eastern plains, or "llanos." It has attracted fighters from the 7th, the 43rd and the 16th Fronts, which operate in the departments of Guaviare, Meta, Vichada and Guainía; in Chocó, elements of the 57th Front have gone rogue; in Nariño members of the 29th Front and the Daniel Aldana Mobile Column; in Antioquia fighters from the 18th Front have left one of the pre-concentration zones; as well as the 14th Front in Caquetá, there are reports of members of the 49th Front, which operates next to the 14th, also refusing to obey orders from the FARC commander-in-chief, Rodrigo Londoño Echeverri, alias "Timochenko." 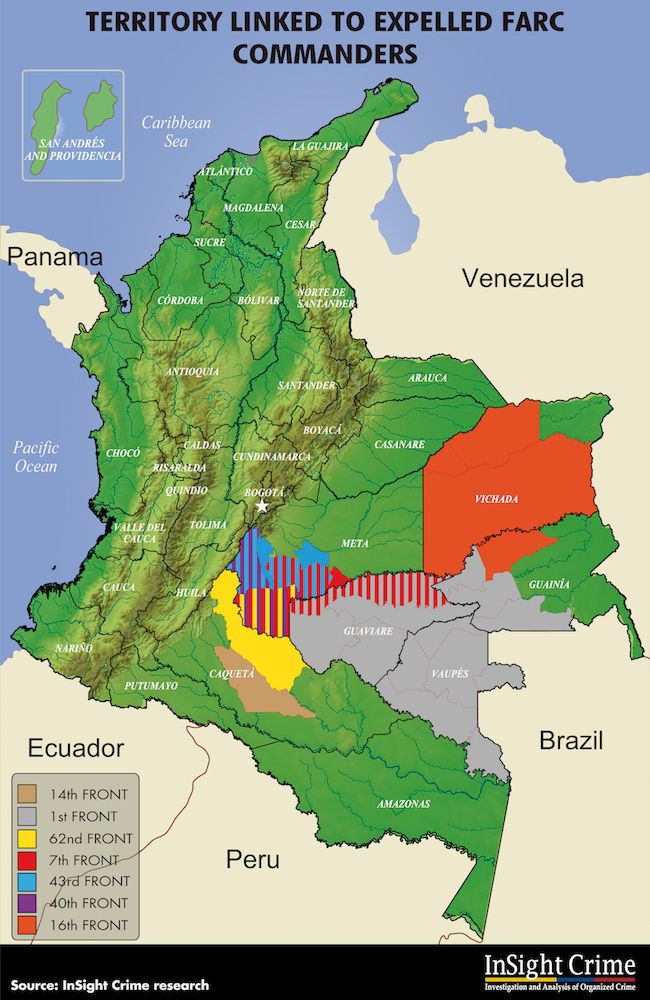 The scale of the FARC desertion will not become fully evident until the government completes the concentration zones and the loyal guerrillas occupy them.  There is a controversy brewing over how many rebels should be concentrating. InSight Crime believes that the FARC, including all militiamen, numbers almost 30,000. The militia was specifically mentioned in the peace agreement and should be handing over weapons as well.

The FARC have three types of militia: the Bolivarian militia, who are guerrillas who live in local communities but have received military training and carry out attacks and killings; the popular militia, which is responsible for logistics and intelligence gathering; and the Clandestine Communist Party of Colombia (Partido Comunista Clandestino Colombiano - PC3), which is a purely political organization.  While the FARC promised in the agreement to demobilize all its members, including militiamen, really it was only the Bolivarian militia that was going to move into concentration zones. Most fronts have two Bolivarian militiamen for every uniformed rebel, or "guerrillero raso."

Since there are an estimated 7,000 guerrilleros rasos, the total number of rebels to enter the demobilization zones should be in excess of 20,000. Sources in the Defense Ministry are talking of less than half of that number moving into pre-concentration zones. This means that the dissidence rate could be between 40 and 60 percent. In previous demobilization processes, like that of the Popular Liberation Army (Ejército Popular de Liberación – EPL) in 1991 and the United Self-Defense Forces of Colombia (Autodefensas Unidas de Colombia - AUC) in 2006, the desertion or dissident rate was around 20 percent.

InSight Crime spoke to two FARC militiamen who stated that there were bitter divisions within the movement. The first, a member of the Magdalena Medio Bloc, stated that there were deep rifts between the political commanders, many who have been living outside of Colombia for years, and the fighting rank and file, who have suffered aerial bombardments and combat.

"The politicians are taking all the jobs, and the warriors are being told to shut up and obey orders," said the militiaman.

Another militiaman, "Juan," who has worked with both the Eastern and Southern Blocs, said that faith in the process was evaporating due to the nature of the agreement, which he saw as a "submission," the delays in ratifying the accord and now the chaos over the establishment of the concentration zones.

"If they cannot even organize these [zones], how are they going to implement the agreement? Santos just wants to take our weapons off us and that is it," he said.

SEE ALSO: The FARC No Longer a Criminal Power?

Juan also stated that the list of rebel commanders joining the dissidents is growing.  The most senior deserter to date, Miguel Botache Santanilla, alias "Gentil Duarte," is a widely respected member of the movement, and could become the leader of a "Continuity" FARC.

"He is a fighter and good at military strategy, but he is quiet and no politician, and as such might not be charismatic enough to acts as an alternative FARC leader to Timochenko," Juan stated.

Five rebel commanders have already been expelled from the movement, Gentil Duarte among them. The others are Géner García Molina, alias "John 40"; Luis Alfonso Lizcano Gualdrón, alias "Euclides Mora"; Ernesto Orjuela Tovar, alias "Giovanni Chuspas"; and Miguel Díaz San Martín, alias "Julián Chollo." Added to this there now appears to be the head of the 14th Front, "El Mojoso," and Juan also stated that Gustavo González Sánchez, alias "Rambo," the head of the Daniel Aldana Mobile Column based in the southern department of Nariño, had also left with money and weapons and was currently in Ecuador waiting to see how many arrive at the concentration zones.

Several senior FARC commanders have also been demoted or punished for alleged misdeeds, creating yet more resentment in rebel ranks.  Among those who have been sanctioned according to FARC sources are José Benito Cabrera Cuevas, alias "Fabián Ramírez," once the military head of the Southern Bloc; Luis Eduardo Marin, alias "Rafael Gutierrez," once the head of the 45th Front; Édgar Salgado Aragón, alias "Cadete," head of the 27th Front; and Rigoberto Lozano, alias "Victor Tirado," once the commander of the Yarí Mobile Column and perhaps later the 62nd Front.

Another fear expressed by guerrilla sources to InSight Crime is the killing of left-wing community leaders. Last year at least 52 left-wing and community activists were killed, many linked to the Patriotic March party (Marcha Patriótica), which seized FARC documents suggest has ties to the rebel movement. In the 1980s, during a previous peace process and ceasefire agreement, the FARC set up a political party, the Patriotic Union (Unión Patriótica - UP). Some 4,000 members of the political movement were assassinated, among them a presidential candidate. The FARC fear that the same could happen again after they hand over their weapons and emerge from jungle and mountain strongholds.

The break-up of the FARC is going to further complicate the criminal landscape in Colombia. Some of the rebels will retain their Marxist ideology and rebel façade. Others may join their cousins of the National Liberation Army (Ejército de Liberación Nacional -ELN), which although engaged in preliminary peace talks, is still in the field and years away from any kind of peace deal. Many will join other criminal structures, or simply go into business for themselves, taking over the drug, extortion and gold mining operations the FARC have long controlled.

After the demobilization of the AUC a new generation of criminal groups was born, which the government dubbed the "BACRIM" (from the Spanish "bandas criminales"). Colombia needs to brace itself for the birth of the "FARCRIM."

The FARC and the Drug Trade: Siamese Twins?

The FARC have always had a love-hate relationship with drugs. They love the money it brings, funds which have allowed…