A bus near the Mexico's northern border
ANALYSIS

Going to the Border in Tamaulipas, Mexico? Get a Police Escort

Driving Tamaulipas highways is dangerous, so much so that every day for the past four years, Federal Police have lead an escort from the state capital to the border. Even the police no longer drive at night. Bus companies have been forced to make drastic adjustments, canceling routes, changing departure times and traveling in convoys. It is a harrowing new reality.

Every day, just before 7 a.m., a line of vehicles carrying families and friends anxious to do some shopping across the border in the United States and traveling salesman wait in front of the Federal Police station on Eighth Street in Ciudad Victoria, Tamaulipas.

You don't need to make a reservation. Going on four years now, the police know the commuters will be there. Today there are about a dozen cars, but during holiday season there can be up to 200 vehicles. The caravan has never been canceled and there have now been 4,300 of them and not a single incident.

The routine is the same: Before leaving, the officers record the name of each driver and make a list. They advise the participants that they will be driving at more than 100 kilometers per hour and passing is prohibited. Some times, two patrol cars are used -- one at the head of the caravan and the other bringing up the rear. Some times there is just one police car. When the police lights flash on, the passenger cars know it is time to leave for federal highway 101.

An hour later, two other convoys of cars -- with police escort -- leave headed for the border towns of Matamoros and Reynosa. 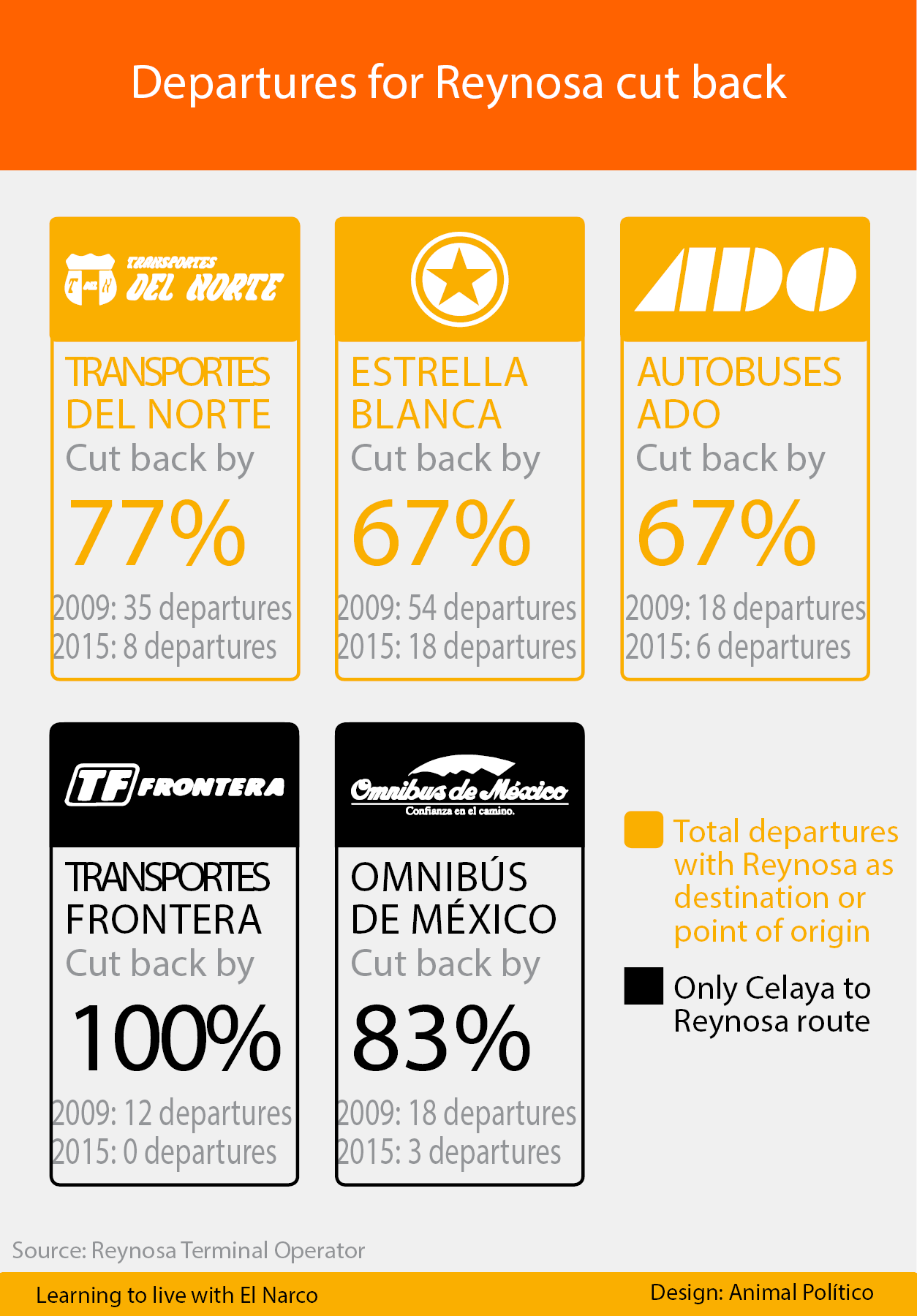 Officially, the convoys are called "Operation Safe Passage" but the locals simply call it "The Federal Police Caravans."

There is simply no other way to travel these highways with any sense of security. Robberies and assaults have soared by 112 percent in the past year and dozens of kidnappings have been reported.

As a result, the new rule is always travel in a group and never at night. The caravan is the best option because the authorities can't guarantee safety. They simply can't. Traveling along is to risk your life.

"The buses left with about 40 passengers, but only the driver reached the destination … all the passengers were disappeared … nobody knows what happened to them …"

Jorge could not hide his outrage, although there was a hint of resignation in his voice. He is the Reynosa bus station supervisor but we've changed his name to protect his identity. He shares stories that still leave him shaking with fright. On the afternoon of Wednesday, March 24, 2010, a report from Omnibus de Mexico sent shivers up and down his spine. One of their buses destined for Ciudad Victoria failed to arrive.

Similar incidents occurr regularly. In April 2011 Jorge's worst fears were realized. About 200 bodies were discovered in a common grave in the city of San Fernando, including some who were identified as bus passengers who had been kidnapped by the notorious Zetas crime gang.

There is no reverse button that can erase this fear. The people, Jorge says, have little choice but to travel by bus, but the toll the violence has taken is visible. Commuters driving by car have their caravans, while bus lines have adopted their own strategies. Departure times are changed regularly, routes are altered and some are even canceled, like the Monterrey-Tampico and the Ciudad Victoria-Celaya routes.

For the past decade, from his seat in the bus station's security booth, Jorge has had a bird's eye view of the changes. The bigger bus lines have cut back from 10 departures to eight or less on some routes. Some bus lines -- including Huasteca, Tres Estrellas and Elite -- no longer exist.

"Even getting to Cielo (heaven, in English) has become more complicated," he says with intended irony. El Cielo is a biosphere reserve in the southern Tamaulipas mountains, a 145,000-hectare nature reserve recognized by the United Nations Educational, Scientific and Cultural Organization (UNESCO) as a World Heritage Site. Tourism bus companies still travel there.

"There was one route that was called 'The Road to Heaven' departing from Maiz and it traversed the entire sierra. It was spectacular … and now it's gone," Jorge says. Grupo Senda, a local Tamaulipas bus company, canceled all of its night-time routes, including one that stopped in El Cielo, a driver for Grupo Senda confirmed.

Not Even Police Travel Alone or at Night

"I got to Matamoros by caravan and I could have returned that afternoon to Ciudad Victoria but the Federal Police told me it was best if I stayed there overnight and returned the next day. The police won't even travel at night."

Hugo, 21, speaks matter-of-factly about the danger on the highways, as if it had always been so. 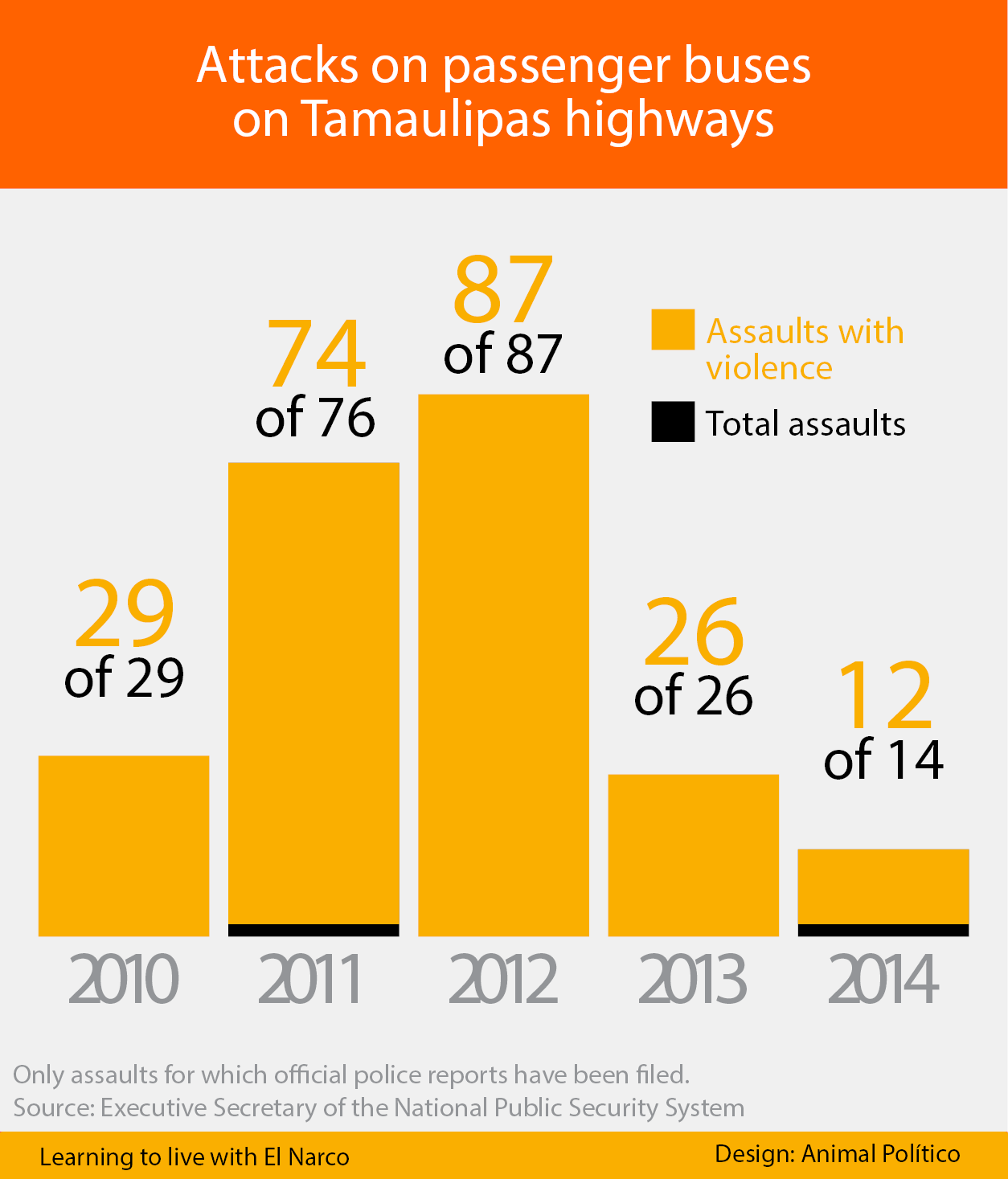 He had driven 300 kilometers in his compact car from the state capital, Ciudad Victoria, where he attends university, to the border town of Matamoros. He had returned to gather study notes for an exam that he had left at home.

Following the suggestions of the police, he waited until the next day to drive back to school, catching up with the caravan at "The Y," an intersection in San Fernando where the highway from the capital splits off toward Matamoros and Reynosa. The caravan typically halts there so the police can check out all the vehicles in the caravan, revise the list to include those who join up at this juncture as well as confirm the order the cars must maintain.

Hugo looks at his watch. It is 9:35 a.m. He is worried about his exam, not about narco gunmen. He still must change for class -- he is a law student and he is traveling in Bermuda shorts. 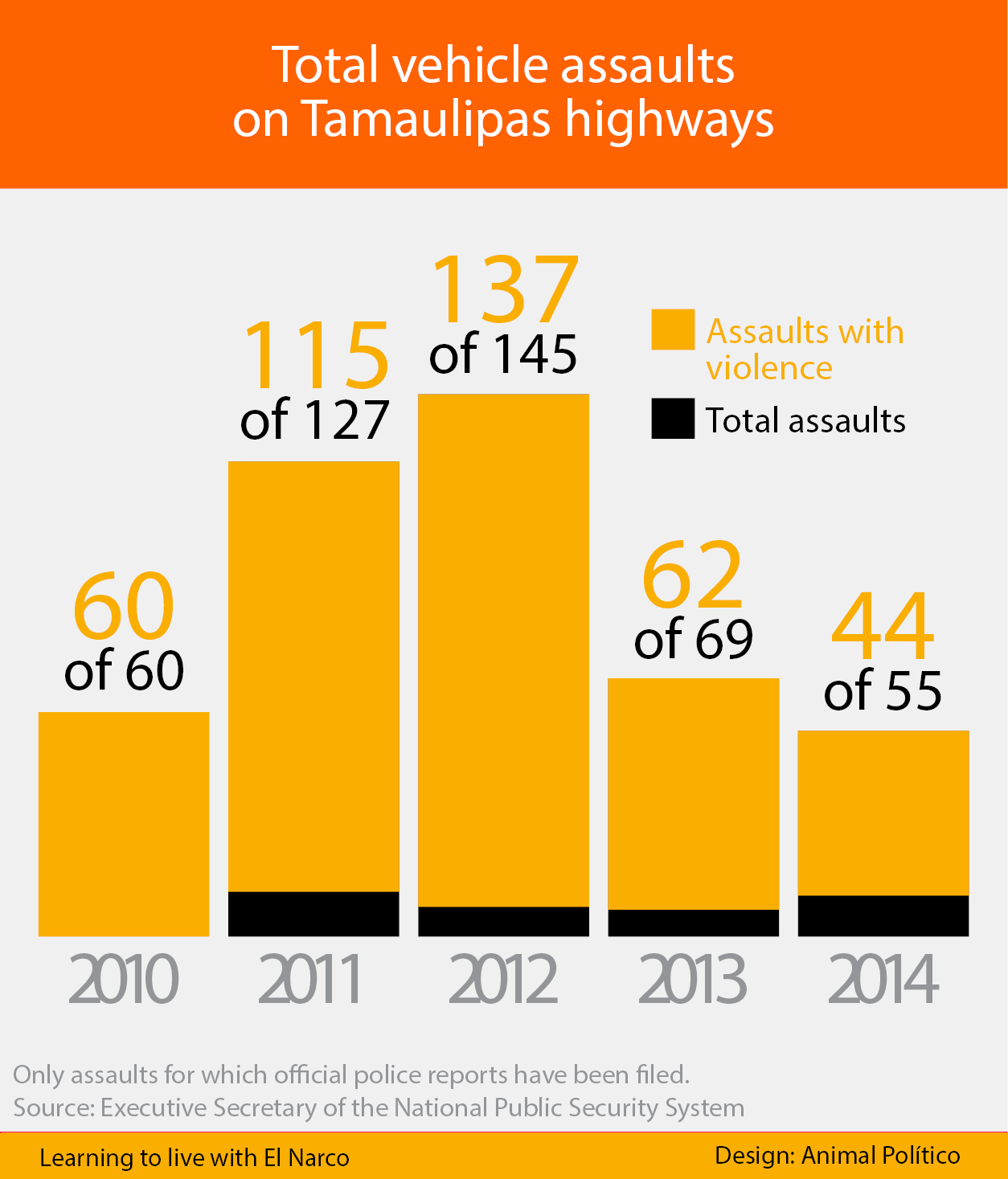 Also in the caravan, Rosa Maria recalls the days when an escorted convoy was not necessary. She drives a white 2009 Jeep with Texas plates, not an uncommon site as many border residents can buy cars cheaper "on the other side."

Before 2010, muses the 55-year-old, "I would hop in my truck here in Ciudad Victoria at six in the morning and be in Austin by four in the afternoon. And I would be all alone, listening to the radio as calm as could be."

Those days are over. As Hiram -- another Tamaulipas resident -- observes, "Now we must hold Daddy's hand just to cross the street."

Before he became the Reynosa terminal supervisor, Jorge spent two decades as a driver and mechanic at the bus station. Out on the highway, he had seen everything, but nothing that compares to the new reality. "It is very worrisome because this is such a necessary service," he says in halting tones. "We lose the bus service and we lose the state."

Passenger bus service continues but under very specific rules: greater security, fewer departures and longer travel times. Buses leaving Reynosa and Matamoros in the mornings for Ciudad Victoria must wait at the edge of town for the police escort. The delay is calculated into the scheduled travel time that now regularly exceeds four hours.

Sergio Quevedo, a bus driver with more than 20 years experience with the two main bus lines, ADO and ETN, is familiar with the procedures and the inconveniences they cause. "The [federal police] command you to drive at a specific speed limit without stopping all the way to San Fernando. The speed at which we travel concerns some passengers, but we have no choice. We must comply," he says.

Now Quevedo drives a late-model bus, a luxury Volvo with two levels and 36 seats that features internal cameras and monitors so he can keep an eye on the passengers and a GPS system designed to track the bus' whereabouts and provide greater security for the passengers.

And there are the checkpoints. At some, a stop is not required. The Federal Police checkpoints have X-ray machines to scan the interior of the vehicles as they pass, though they are required to slow down. The military checkpoint at San Fernando is a forced stop and the soldiers carry out a thorough revision of all the passengers in every vehicle. 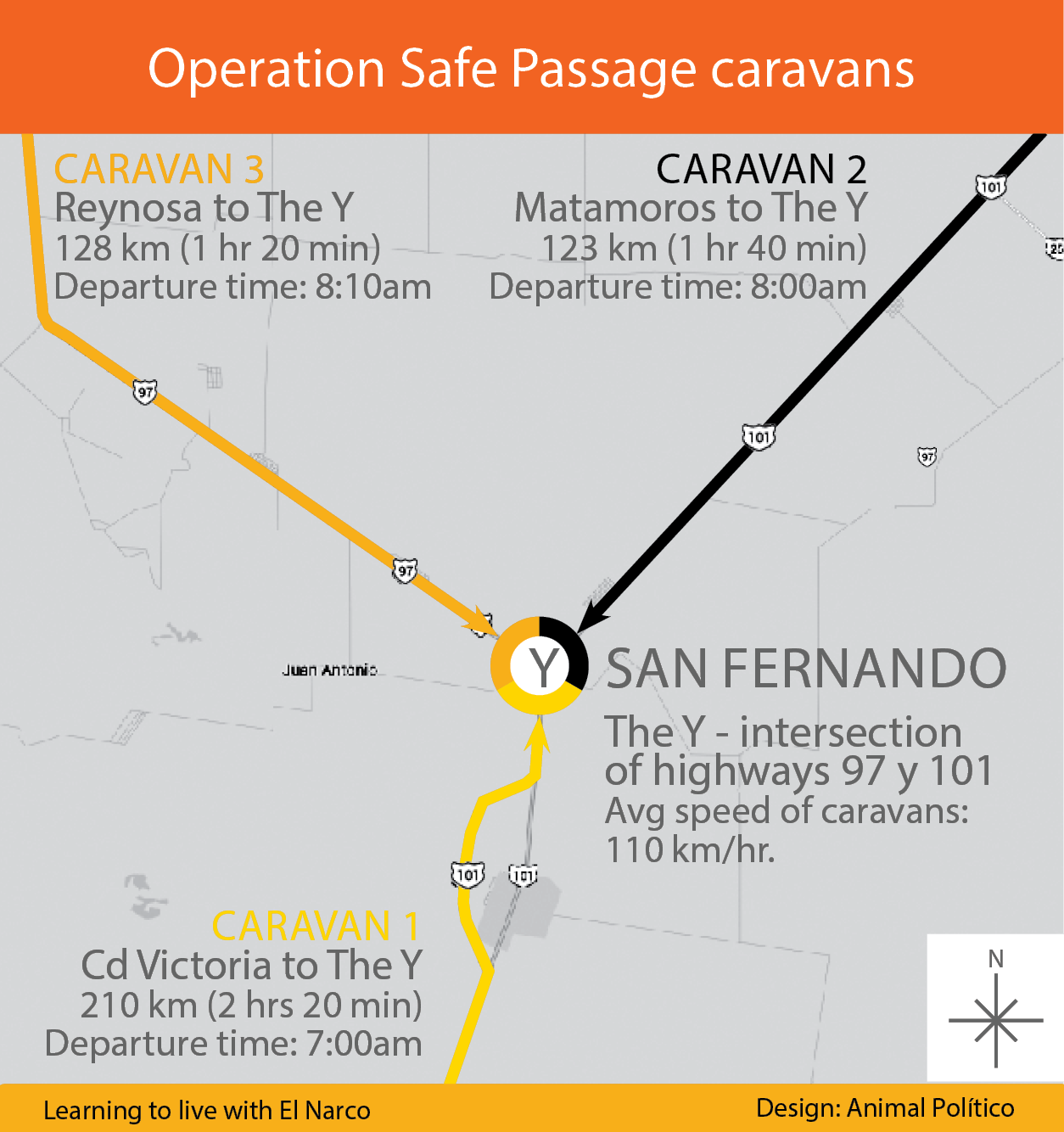 And what about the unauthorized checkpoints? Those set up by criminal organizations? Arturo Urrutia, another driver who has 15 years of experience with ETN, says he takes part in annual training programs in Mexico City or Monterrey to improve his defensive driving and passenger service skills. In cases of assault or attack, the recommendations are always the same, clear and straightforward:

"Stay still, don't move a muscle, don't resist. It is not only your life at risk, but every one of your passengers. When it is all over and they let you go, drive straight to the closest town and call the authorities."

However, not all the drivers obey these instructions. One driver for Transpais recalled an incident from about two months ago. About 45 minutes out of Reynosa, gunmen ordered him to stop and he accelerated, speeding up in an effort to get to the border city. He got up to 120 kilometers per hour and then, a gunshot.

"The bullet smashed through the driver's side window, but missed him," Arturo recalls. "Just 15 centimeters lower and he'd be dead, but what would have happened to the passengers at that speed? There were 40 passengers whose lives he risked."

*This article was originally published by Animal Politico, as part of the series, "Learning to Live With El Narco." See Spanish version here.  It was translated and edited by El Daily Post (see here) and is reprinted with permission.

Drone attacks in Michoacán, bodies hanging from bridges in Zacatecas, attacks with remotely detonated explosives in Guanajuato, massacres in Jalisco…

As Marijuana Profits Dry Up, Mexico Crime Groups Turn to Alcohol and Logging

Mexico remains the main international provider of marijuana for the United States, but this has greatly diminished since 2013, forcing…