Latin America is the world's most violent region
ANALYSIS

Latin America is considered the world's most violent region, and 2014 did little to change that. While some countries showed marked improvement in reducing violence last year, others saw the further deterioration of an already fragile security situation. As Latin American governments ponder strategies for lowering violence in 2015, InSight Crime looks at the 2014 regional homicide trends. 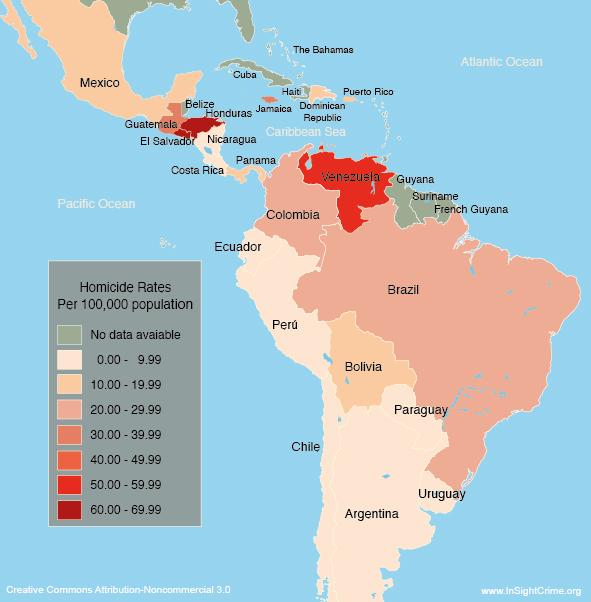 Honduras: On December 31, Honduras' Security Minister Arturo Corrales announced the country's 2014 homicide rate stood at 66 per 100,000. The government homicide figures for 2014 largely coincide with those of the Honduras Observatory of Violence. While Honduras remains one of the most violent countries in the region, this figure represents a significant decrease from the 79 per 100,000 murder rate recorded by the Observatory in 2013.

Although official Venezuelan homicide figures have yet to be released for 2014, is it unlikely they would look anything like those of the OVV, as the current administration has previously admitted to not disclosing unflattering crime statistics.

Jamaica: Jamaica registered 1,001 murders last year, according to the country's national police, making for a homicide rate of 36.4 per 100,000.* While high, the island nation reduced the total number of murders by 17 percent from the 1,200 homicides counted in 2013. The lower number of murders – in addition to the significant decline in killings by Jamaican police officers – are important security achievements for a country which typically registers one of the world's highest homicide rates.

Guatemala: On January 3, President Otto Perez Molina announced Guatemala's homicide rate dropped to 31 per 100,000 in 2014, down from 40 per 100,000 in the previous year. However, the country's forensic unit (Inacif) recorded an average of 16 murders per day in 2014, or 2 more per day than government data. Perez accounted for the difference by saying Inacif counts suicides and other violent deaths not included in the government figures.

Brazil: Brazil registered 56,337 homicides in 2012 for a murder rate of 29 per 100,000, according to the government's 2014 Map of Violence (pdf). 2012 marked the highest number of homicides on record and an 8 percent increase from 2011, according to the government figures. Brazilian police are considered among the most violent in the region, and reportedly killed 2,212 citizens in 2013 alone.

Colombia: Colombia lowered its homicide rate to 26.1 per 100,000* last year, making 2014 the country's least violent year since the height of Pablo Escobar's power in the mid-1980s. However, it is unclear if the drop in homicides has more to do with recent truces among criminal groups – such as the 2013 deal between the Urabeños and Oficina de Envigado – or the success of the government's security policies. Most likely it is a combination of the two.

Puerto Rico: On December 30, the head of the country's police force Jose Caldero announced 2014 had the lowest number of reported homicides in 15 years. The 680 murders last year reflect a rate of 18.4 per 100,000*, a 23 percent decrease in the total number of homicides from 2013. The police chief credited the country's police officers and judicial system, as well as citizen cooperation, for the drop in murders.

Dominican Republic: The Dominican Republic registered 1,344 homicides in the first nine months of 2014 for a murder rate of 18.1 per 100,000, according to data from the country's Observatory of Citizen Security. This marks an eight percent drop from the number of reported homicides over the same time period in 2013.

Panama: Continuing a five-year trend, Panama's homicide rate dropped slightly in 2014 to 15 per 100,000, according to the country's Minister of Public Security. Panama has experienced a steady decline in homicides since 2009, when the rate stood at 23 per 100,000. This decrease has largely coincided with an increase in public spending on violence containment – and, curiously, a proliferation of street gangs.

However, some have questioned the veracity of the SNSP's homicide figures, and one newspaper claimed there were between 19,500 and 20,500 homicides in Mexico last year. 20,000 murders would reflect a 16.1 per 100,000 homicide rate. This would be a 12 percent drop in total murders from 2013, when the country registered 19 murders per 100,000, according to the country's National Institute of Statistics and Geography (INEGI).

Bolivia: Bolivia had a homicide rate of 12.1 per 100,000 in 2012, according to the most recent UN Office on Drugs and Crime (UNODC) data (pdf). While Bolivia remains a relatively safe country, the incursion of foreign organized crime groups has contributed to its status as South America's new drug hub, which may result in an increased murder count in 2015.

Costa Rica: Costa Rica registered 453 homicides in 2014, according to data gathered by the country's Judicial Investigation Unit. At 9.5 per 100,000, this is a slight increase from the country's 2013 homicide rate of 8.6 per 100,000. According to Costa Rica's Vice Minister Gustavo Mata, revenge killings (“ajustes de cuenta”) between local drug trafficking gangs are a contributor to the uptick in violence.

Paraguay: At 8.8 per 100,000, Paraguay registered a slight decrease in homicides in 2013 with respect to 2012 (9.7 per 100,000), according to Ministry of the Interior. While no homicide information has been released for 2014, this figure could likely rise, as institutional corruption helped facilitated the country's growing role in the regional marijuana trade last year.

Nicaragua: In May 2014, the UN Development Program (UNDP) reported Nicaragua's homicide rate was 8.7 per 100,000. Police sources consider the seizure of over 19,000 weapons between 2008 and 2013 to play a significant factor in making Nicaragua Central America's least violent country. Despite the low homicide rate, Nicaragua continues to be a dangerous place to be a woman: the country registered 65 femicides from January through the middle of December last year.

Ecuador: Ecuador's Interior Ministry reported just 1,199 murders last year, a 24 percent drop from the 1,582 homicides the government agency registered in 2013. One security analyst told InSight Crime the decline in Ecuador's homicide rate from 18 per 100,000 in 2009 to 8 per 100,000 in 2014 would be “miraculous,” if accurate. Increased spending on police and stiffer penalties for hired assassins (“sicarios”) have been credited for the decrease in violence.

Uruguay: The Uruguayan government registered 257 homicides through December 28 of last year, which means the country remained among the region's safest with a murder rate of 7.5 per 100,000.* While the number of reported homicides last year was nearly identical to 2013, murder totals in Uruguay under the administration of outgoing President Jose Mujica are 60 percent higher than during the mid-1980's.

Peru: Although 2014 homicide figures in Peru have yet to be reported, the country's National Statistics Institute (INEI) recorded a murder rate of just 6.6 per 100,000 in 2013. While this rate makes Peru one of the safest countries in Latin America, the total number of murders rose 24 percent between 2011 and 2013. However there is controversy over the way Peru collects its homicide data and different agencies quote different figures. Peru also registered the second highest number of femicides in Latin America in 2013, and was recently named the fourth most dangerous country in the world to be an environmental activist.

Argentina: The most recent homicide data available for Argentina is from 2010, when the country reported a murder rate of 5.5 per 100,000, according to the UNODC (pdf). Despite the lack of current data on national homicide figures, the murder rate has reportedly reached 22 per 100,000 in the city of Rosario, four times the national average.

Chile: Chile registered 550 murders in 2012 for a homicide rate of 3.1 per 100,000, according to statistics (pdf) from the UNODC. Chile is widely considered the least violent country in Latin America.

*Murder rates calculated by InSight Crime based on number of reported homicides and the country's 2014 population total, according to the World Bank.

series of attacks on oil pipelines in Colombia's northeastern department of Santander, for which the ELN has claimed responsibility, could…