Mexico’s Most Wanted List shrank recently, but not because of a successful sting operation or a spectacular arrest. Instead, the Enrique Peña Nieto administration has removed the names of 10 cartel leaders, lieutenants and kidnappers whose Most Wanted designation dates back over a decade.

Ten men who were among the most sought after criminals during the two previous governments were removed from the Most Wanted List recently. (See El Daily Post's graphic below)

This article was originally published by El Daily Post and is reprinted with permission. See the original here.

This list of priority objectives released to Spanish-language news site Animal Politico as a result of a public information request submitted earlier this year, only included four men. The Federal Attorney General’s Office (PGR) says it has a list of its top 30 objectives remaining at large. This list was pared down from its original list of 122 cited by the PGR at the beginning of the Peña Nieto administration. But that list was never presented to the public. 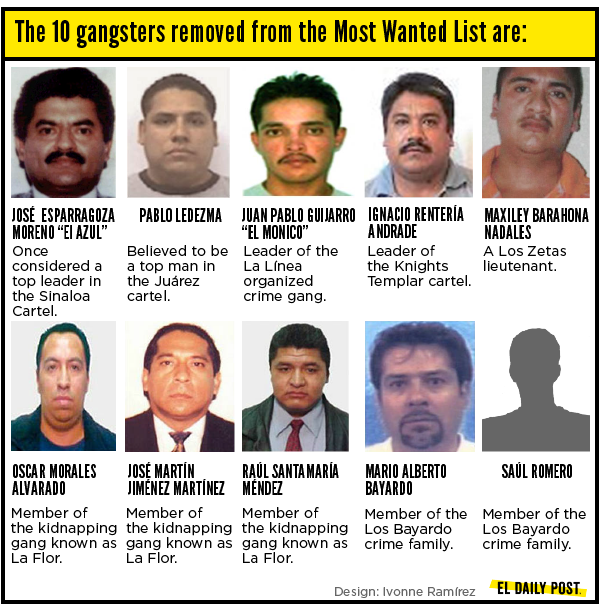 The PGR had taken the position that only four of the names on the list could be made public and the other 26 should remain confidential despite an order from the Public Information Institute (INAI) that it must reveal the full names of the entire list.

INAI had ruled that the PGR failed to prove that public release of the 30 delinquents on the Most Wanted List would negatively impact its operations. The decision also stated that the PGR and the Interior Secretariat had publicly mentioned the names on the list in the past. The list provided to Animal Politico included the full names of the suspects and the criminal organization to which they belong.

“Publishing the names of these criminals is for the good of the public and it is also mandated by transparency laws which are designed to allow citizens to count on accurate information that lets them evaluate the government’s crime-fighting performance,” the ruling reads.

Upon releasing the list to Animal Politico, the PGR insisted that some of the names not be published because they are part of ongoing judicial proceedings and “publishing the names of suspects in active cases is prohibited.”

PGR sources also confirmed that 10 criminals from the original list of 122 objectives were removed from the priority target list of 30, even though in some cases rewards had been offered by previous administrations.

The PGR also insisted that much of the list should remain classified “so as not to compromise ongoing operations and investigation by national security personnel as well as joint operations with international organizations.”

Government officials also believe that releasing the information could reveal the depth of the intelligence gathered thus far and perhaps help cartels and capos take measures in response, such as plastic surgery. It could also prompt violence between cartels if rival gangs don’t know the hierarchy of their competitors.

The reason that the four top names mentioned above were included in the list released to Animal Politico is because rewards have been offered to the public, so they are well known.

The breakdown of the top 30 is as follows:

13 are members of the Sinaloa cartel, also referred to as the Pacific cartel

5 are members of the Beltran Leyva crime family

3 are members of the Eastern cartel

2 are members of the Zetas gang

2 are members of La Familia Michoacana

2 are members of the Jalisco New Generation Cartel

2 are members of the Juarez cartel

1 is a member of the Gulf cartel

After receiving the incomplete list, Animal Político talked to PGR officials who argued that since the other 26 have not had rewards offered for their capture “they are names that have not been made public before, many have no idea we are actively investigating and pursuing them and they range from hit men to financial managers.”

PGR sources also confirmed that 10 criminals from the original list of 122 objectives were removed from the priority target list of 30, even though in some cases rewards had been offered by previous administrations. They did release those names to Animal Político.

The 10 gangsters removed from the Most Wanted List are:

Pablo Ledezma, believed to be a top man in the Juarez cartel

*This article was originally published by El Daily Post and is reprinted with permission. See the original here.

Mexican geoduck clam populations are suffering as legal harvests are threatened by rampant poaching, which has driven the species onto…

Criminal groups in Mexico are posting in public lists of police they plan to kill, and the message often comes…