After years of relative stability, the agreements that once governed Honduras' criminal underworld are reportedly falling apart, a development that would have no small effect on the political elites linked to organized crime.

The fragmentation came after years of apparent stability, thanks to a pax-mafioso brokered by the country's largest drug trafficking groups, according to a two-part investigation by Honduran newspaper El Heraldo. (See part 1 and part 2).

El Heraldo claims the underworld allies -- identified by government intelligence documents as "14e," divided up the country into small drug trafficking fiefdoms about a decade ago.

These allies included the "AA Brothers Cartel," the Valle Valle brothers, the Cachiros, the Valle de Sula Cartel, and the Olancho Cartel.

During one meeting of the 14e, the group decided to create a new drug trafficking group, which they baptized the "South Cartel," a reporter with El Heraldo told InSight Crime in an e-mail correspondence. This criminal group reportedly controlled drug trafficking routes in the southern and western provinces of Honduras along the border with Nicaragua.

The organizations that made up the 14e operated for almost a decade with “absolute impunity,” thanks to their control of Honduras' police and military, as well as the country's political class and justice system, the report states. 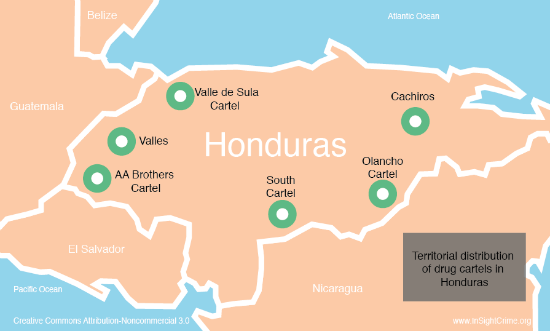 However, within the span of the past year, the top leaders of the Valle Valle organization and the Cachiros are now all in US custody. At least one other alleged member of the 14e --  Hector Emilio Fernandez Rosa, alias “Don H” -- has also been arrested. Even the South Cartel is under pressure -- El Heraldo told InSight Crime that Honduran authorities have seized assets belonging to the leaders of this criminal group.

The flux in Honduras' underworld is unsettling the political elites in this country. This is because these traffickers have direct ties to Honduran politicians. In one example, Don H is the brother of Rene Fernandez Rosa, who became a national congressman following the murder of politician Jose Eduardo Gauggel Medina in April 2015.

Another notable political elite with ties to organized crime is Jose Miguel "Chepe" Handal. The son of a prominent member of Honduras' Liberal Party, Handal was arrested earlier this year and charged with drug trafficking in Honduras. Both he and his father had previously been named on the US Treasury Department's drug "kingpin" list.

In other cases, the connections are less public but can be just as damaging to the politicians in question. Former President Manuel Zelaya, for example, had to fight off accusations of ties with drug traffickers.

The captures and extraditions of several traffickers have opened the door to the possible prosecution of these politicians. A number of the prominent drug traffickers captured in the past year -- including the Valle Valle brothers -- have been extradited to the United States, a country known to offer suspects legal benefits in exchange for information on their accomplices.

Results of this information exchange may already be evident. In May, the Drug Enforcement Administration (DEA) arrested Fabio Lobo Lobo, the son of former Honduran President Porfirio Lobo.

The prospects of extradited drug traffickers turning into US informants and further revelations of government corruption has sent shockwaves through Honduras' political class. If these fears are realized, Honduras' underworld could look orderly in comparison to the eruption of chaos in the country's political world.