Guatemala lowered its rate of homicides per 100,000 inhabitants for the second consecutive year in 2013, according to data from the National Civil Police (PNC). But are the policies of the current government to thank for this accomplishment?

"I think over the last two years, which have been our responsibility, important steps have been taken to move the country toward a more prosperous and secure Guatemala," said Guatemalan President Otto Perez Molina after hearing the results of a United Nations Development Programme (UNDP) report that emphasizes the failure of "mano dura" ("iron fist") policies in the region. The proof that his policies have been successful, the president said, is the reduction of the homicide rate from 38.61 per 100,000 people to 34.03, after two years in office.

The data, held aloft by the President of the Republic and Interior Ministry, represents the lowest homicide rate in the last decade. 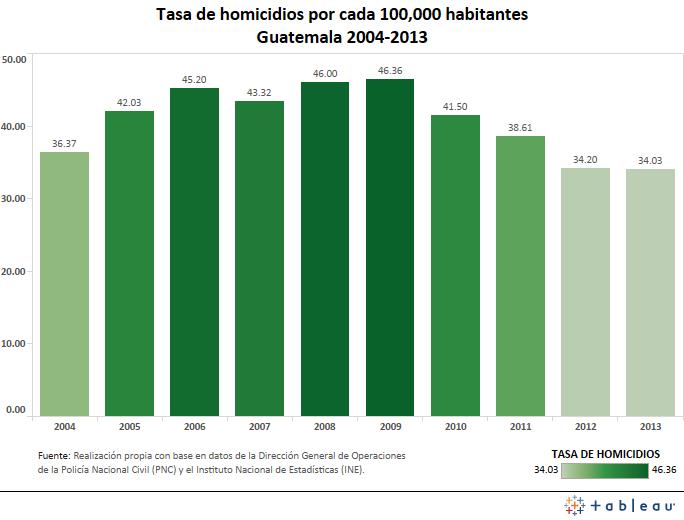 Yet, the same figures from the General Operations Branch of the National Civil Police (PNC) show something different. First, the downward trend of killings started in the last quarter of 2009, despite it being the year with the highest rate of homicides (46.36 per 100,000), and the downward trend has continued since then.

In early October 2011, Carlos Mendoza, an analyst at Central American Business Intelligence (CABI), analyzed monthly patterns in homicide numbers and concluded there was a downward trend. CABI statistics, based on data from the PNC, showed a peak in homicides in August 2008 -- when 616 cases were reported. After that date, Mendoza stressed that he saw a "downward trend, albeit with some volatility." The existence of sustained declines of up to six months between several violent peaks supported his ideas.

In the last two years of the administration of President Alvaro Colom, murders were already falling. The PNC reported a drop of 538 cases in 2010 compared to 2009, and 279 less again the following year, in 2011. This trend then continues into the first year of the presidency of Perez Molina, with a drop of 526 homicides in 2012, compared to the year before. 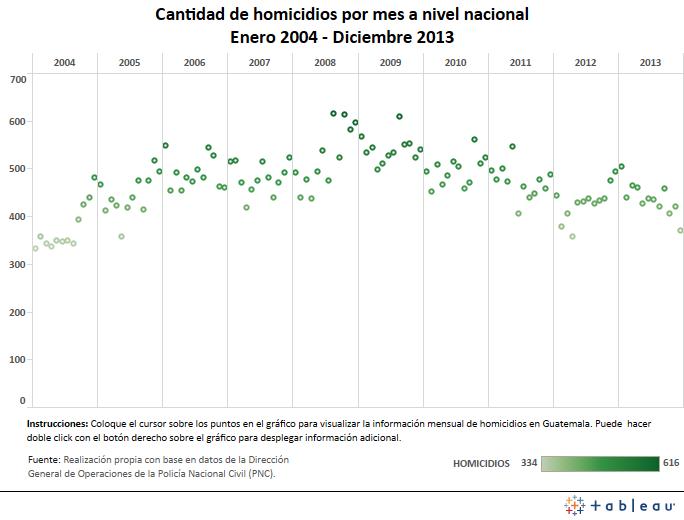 In contrast, the monthly patterns of killings showed a slight increase in cases reported by the PNC in early 2013 compared to 2012 (98 cases more); something that specialists have noted. Carmen Rosa de Leon, at the Institute for Teaching Sustainable Development (Iepades), is adamant that an impasse in this downward trend has been reached. "Since 2009 there was a steady reduction in homicides. And what we see is that while the rate dropped last year, it is more due to projected population growth than more effective crime prevention," she said .

De Leon's argument regarding population increase is based on a projected growth of 2.5 percent per year according to the National Statistics Institute (INE) , which caused the homicide rate to fall despite there being 98 cases were more in 2013 than the previous year.

For De Leon, like Mendoza, the rise in homicides registered by the PNC in November and December 2012 (476 and 494 respectively) and in January 2013 (505 cases) placed a yellow alert over the job the authorities had been doing. Even the CABI raised the alert level over the growth in the homicide statistics after seeing data from the first quarter of 2013, which increased almost eight percentage points over the same period in 2012 -- equivalent to more than 284 murders.

Thus, the statistics give no indication that the reduction comes from policies implemented by the current government.

For example, the Territorial Task Force (FTT), which was advertised with great fanfare after installation and then deployed in September (Maya Task Force, Limon, zone 18) and in October (Kaminal Task Force, El Mezquital, area 12), 2012. Initially, between them they had 1,800 members (1,300 soldiers and 500 police officers) and sought to increase the security forces presence to reduce homicides in "red" zones on the Interior Ministry?s violence maps. Were they successful? Yes and no. Yes, in areas where they intervened. No, in the areas where the criminals migrated to, where crime increased, as happened with the residential areas on the border of Villa Nueva and El Mezquital.

At the national level, the use of the FTT did not result in a significant change in the overall monthly homicide statistics: Between 2011 and 2012, the PNC reported 526 cases less -- 91.06 percent of this reduction was achieved in the first half of the year, and the most violent months of the year (November and December) were experienced when they were in operation.

A second, more important, point is trying to establish which of the reasons for the reduction can be analyzed with the limited information available. In late 2009, the increase in homicides pushed the key elements of the Interior Ministry, the PNC and the Public Ministry (MP) to coordinate their research with the support of international organizations, and create an "anti-homicides" unit that actively participated in all institutions. In addition, added efforts were made in Guatemala City and surrounding municipalities, where slightly more than 21.76 percent of the population is concentrated, and, with a high degree of mobility, where 40.69 percent of national homicides are committed. To reduce homicides in the area directly affected by the general statistics and social perception. 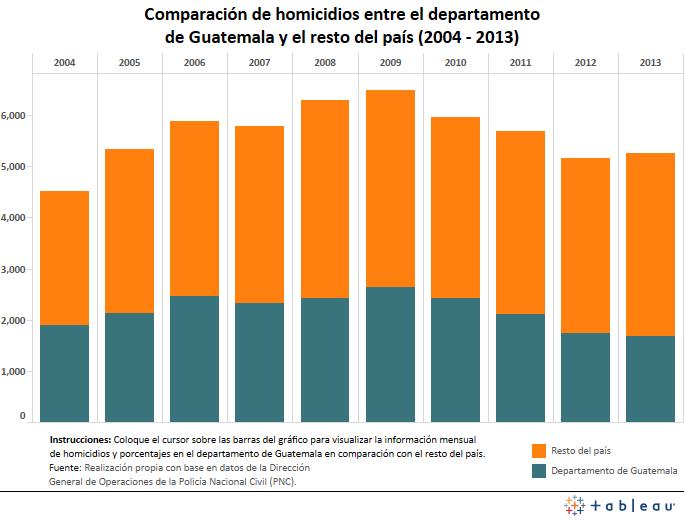 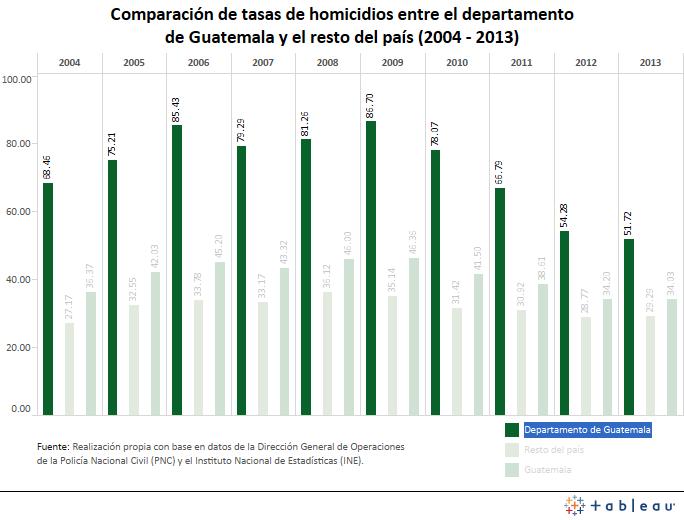 Nevertheless, geographically focusing efforts to combat crime has not been the only thing that ensured the reduction of homicides over the last decade. In late 2010, the Interior Ministry changed the focus of investigations into crimes against people, underpinning the work that was being done with the PNC, turning from investigating individual cases to trying to identify criminal phenomena and structures. The same was done with the crime of extortion, for which a specialized unit was also created. Between the two units, information was compiled by coordinated investigations. These two units were the basis upon which the current government created the Intelligence Task Force, in early 2012, and that enabled the investigation of entire criminal structures.

"Also in that year the scientific research of the National Institute of Forensic Science (Inacif) was cemented with ballistics and DNA testing," said Ernest Archila, of the Institute of Comparative Studies in Criminal Sciences in Guatemala (IECCP), putting him in agreement with Mendoza. "The creation of Inacif, in 2007, was gradually consolidated in 2010 with human, financial and technological resources providing the tools to obtaining scientific evidence," he said.

Claudia Paz y Paz, Attorney General, adds one more tool: the use of wiretaps. "Although the law against organized crime was approved in 2006, wiretaps only began in 2010. And these are a very effective tool to combat crime," the prosecutor acknowledged in an interview with Plaza Publica. 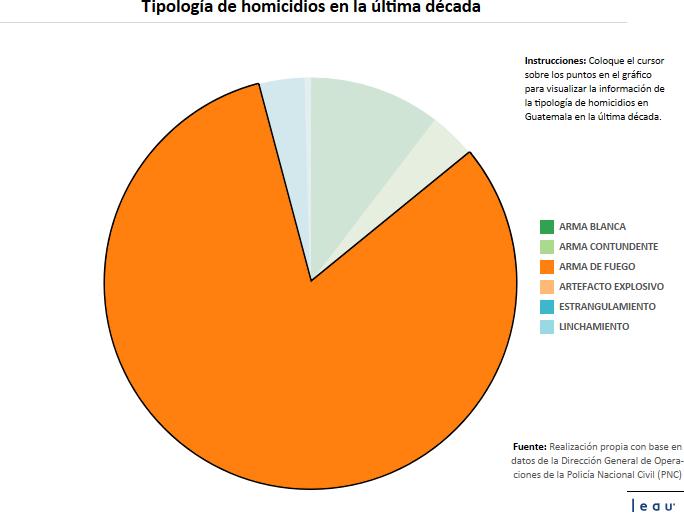 For De Leon, there is still a lack of study of other factors that they can directly cause a reduction in homicides, such as increased regulation of the use of firearms. "The extent of murders with guns remains considerable within the overall volume, it tells us proliferation of weapons goes unresolved, especially small arms," he said.

According to the PNC, 56,350 people died in crime-related incidents in the last decade in Guatemala, 81.77 percent of them were from firearms. This means that, on average, 12 people were killed every day by guns between 2004 and 2013.

According to statistics from the General Directorate of Arms and Munitions Control (DIGECAM) in early 2013 there were three firearms per 100 people in the country. Of those, 63 percent were handguns: easy to carry and hide, as well as readily available and affordable -- from $130 on the black market to up to $2600, depending on the make and model, on the legal market. Projections from the likes of Iepades say that for every legal weapon there are three illegal weapons. 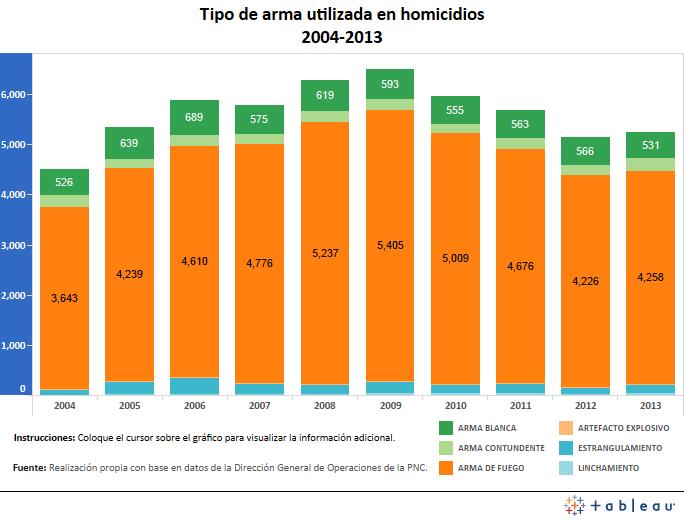 The bad news extends to the number of injuries reported by the PNC. According to police, 12 more peope were injured by firearms every day for the last 10 years. In 2006, a study from the UNDP estimated the cost of treatment for those wounded in social violence to be $147 per day in the national public health network, expenses made up of the purchase of drugs, the loss of working days through incapacitation and the cost of emotional and psychological damage. 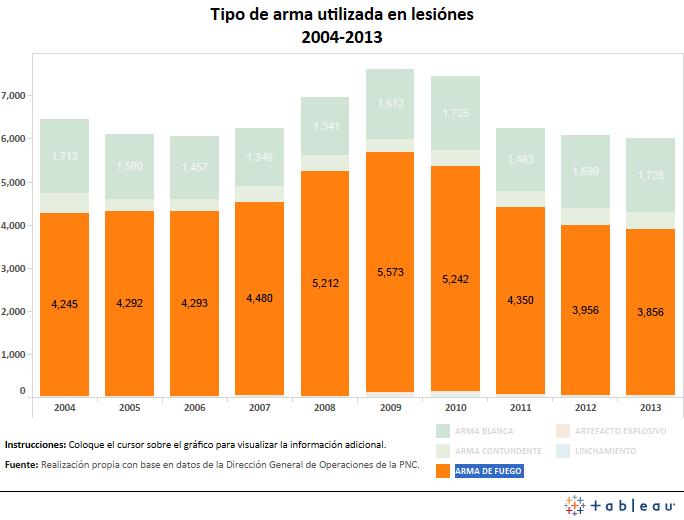 To what extent can the drop in the homicide rate be explained by the change in the strategy of the authorities and the incorporation of scientific evidence? "It's hard to measure because we do not have enough data to contrast with the homicide rates," says Mendoza. But what data is lacking? Reliable statistics of alcohol and drug consumption related to crimes, studies of the development of criminal behavior among gangs, international supply and demand of illicit goods, the restructuring of organized crime gangs and an analysis of the culture of violence, to name a few.

To all this we would also add other measures adopted by the State that were not necessarily designed to reduce social violence but have influenced the phenomenon. For example, De Leon cites the Open Schools program, created in the government of Alvaro Colom and closed during this one, or plans to reorganize public transport with prepaid card systems.

"How much influence did 'Open Schools' have by increasing the supply of secondary education and allowing the appropriation of public space for the reduction of violence in the areas it was implemented? To what extent did not having to handle cash, because of payment cards, drive down the number of bus drivers killed over extortion? These are things that must be analyzed to understand the phenomenon of the reduction because they were processes generated not as a result of security policies but which have reduced homicides," said De Leon.