Borderland Beat investigates the story of an immigrant to the US, seemingly a successful perfume business owner, who became a money launderer for 'El Chapo' and his Sinaloa Cartel via the Black Market Peso Exchange.

The Sweet Scent of the American Dream

From the outside gazing in, it appeared as the quintessential American Dream; an example of the immigration system working flawlessly. Vikram Datta emigrated from India in 1983, becoming a naturalized American citizen 11 years later.

It was on a business trip to Laredo in the year 2000 that Datta visited the bustling downtown merchants sector, where money and merchandise exchanged hands at a rate unimaginable in most parts of the US, but which is business as usual for the border corridor. Datta instantly saw that a goldmine awaited him, and, still keeping his NY location, he moved to the border city and within a year had four very profitable stores in Laredo.

Fast-forwarding another decade finds Datta the owner of a lucrative perfume business with multiple locations in NY, Laredo Tx, Arizona and California, raking in millions each month and living a life of financial success.

Datta had settled in the border town of Laredo, Texas. Two of his four perfume outlets in the city are a mere stone’s throw away from the international bridge that connects Texas to the northeast Mexican state of Tamaulipas. The man chose to live in Alexander Estates, a community designed for the wealthy of the South Texas border city, its homes surrounded by a country club, tennis courts, private park and golf course.

Careful attention was paid to designing Alexander Estates, with its high walls and guarded entrances. The designers were mindful of the fear generated by Texas leaders promoting the idea of drug war “spillover violence,” and of Laredo’s proximity to some of the most violent cities in Mexico. 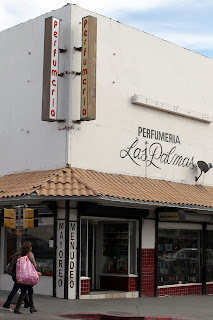 Datta the immigrant, and his family, which included teenaged daughters, were basking in the sweet perfume of success, exemplifying the good life that can be derived from old fashioned hard work.

Or so it would seem from the outside looking in.

But as one moves closer, the perfume gives way to a stench of greed, the Sinaloa Cartel and the Black Market Peso Exchange. For by 2009 Datta’s career had evolved into that of a highly experienced money launderer for one of the world’s most wealthy individuals, Joaquin Archivaldo Guzman Loera, better known by his moniker “El Chapo,” leader of the Sinaloa Cartel.

In New Jersey the Justice Department was executing an investigation in 2009 of a father and son pair of perfume vendors, Ajay and Ankur Gupta. They were suspected of a decade-long dip into the BMPE domain, netting millions.

It was during the Justice Department’s operation against the Guptas that Datta’s name appeared in their records -- so began an investigation of the Laredo perfume vendor.

During the course of the investigation the DEA learned that Datta owned numerous perfume retail outlets and that all but one were on the US-Mexico border. The 11 stores were located in California, Arizona, and Texas, in border cities such as San Ysidro, Nogales and Laredo.

Court records reveal Datta’s BMPE transactions started slowly, but quickly escalated both in frequency and volume. DEA inspections of Datta’s financial records disclose that in a 24 month period, between January 2009 and January 2011, more than $25 million was deposited in his bank accounts from BMPE transactions.

Transcripts from six months of wiretaps exposes a conversation Datta had with an undercover agent in which Datta admits, among other things, that he “move(d) cash” from his “eleven stores on the border.” Datta further stated he was receiving “a lot of cash” from his customers on the border and that “it’s all Sinaloa money”, a reference to the Sinaloa Cartel. 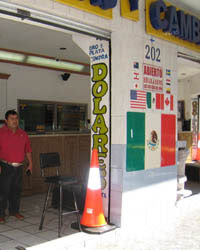 The United States is the world’s largest drug market, generating $10-30 billion each year. Once the drug is in the hands of the US customer, the problem shifts to laundering the vast amounts of profits and transferring them back to the country of origin.

Laundering is the process of exchanging the profits into the currency of the country of origin.

BMPE is a complicated system of money laundering that was created by Colombian drug traffickers in the 1980s and later adopted by Mexican cartels. The system is called Black Market Peso Exchange in reference to its ability to exchange US dollars, while in the US, generated by cartel drug sales, for pesos in the country of origin. By selling the dollars to Colombian businesses that procure US products for export, a system is established that launders the dollars and facilitates the skirting of extensive import fees and exchange tariffs by smuggling the products into the country. (Image, above - "Cambio" Peso Exchange Outlet).

In the early 90s Carlos Ronderos, at the time the Colombian minister for foreign trade, contacted Alvin James, an investigator for the US Treasury Department, regarding the smuggling of US products into Colombia. Colombia had linked the smuggling of goods to drug money laundering (Ronderos would later testify before the US Congress about US corporations' involvement in BMPE).

Until the1990s, transferring drug money was a simple process. The profits were deposited in a US bank and wire transferred back to Colombia. It was in the 90s that the US clamped down on banks and initiated restrictions that made it impossible to use the simple method of wires to launder billions of dollars.

Enter the peso brokers. Exchange brokers are small, informal businesses that have been a Colombian institution for years. One could refer to them as bankers, but unlike banks there were no questions asked about what was being purchased or questions about tariffs. Drug profit dollars could be laundered into the U.S. financial system without suspicions or scrutiny.

Colombian drug cartels ran huge amounts of US dollars through peso brokers in the US, who then would sell them to Colombian businesses. The outward appearance was they were bankers transferring USD to companies in the US, Panama and Aruba for payment of US exports. The goods are then sold in Colombia by legit businesses. They repay the peso broker for the USD, he subtracts his healthy cut, with the remainder of the pesos delivered to the drug cartel, and the money laundering mission is accomplished. 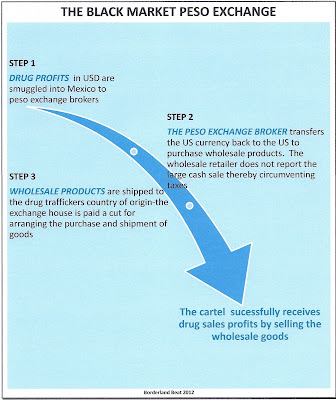 In the 90s a huge controversy and legal case erupted when it was discovered large US corporations such as Philip Morris, INTEL, General Electric, Price Waterhouse and others were being used for the BMPE.

Their contention was that they unknowingly were involved, and according to US law they could only be found guilty if they knew the funds were being laundered for drug cartels and were drug profits.

The end result was the justice system took the tactic to seize the funds, educate the companies and get them on board in the fight against the BMPE. The Justice Department did require some companies to sign what is known as a Consent Decree, which in essence states the company now understood BMPE and if they were involved again they could not claim innocence.

That was the beginning of the Black Market, but clearly not the end. Mexican cartels and other organized crime groups have adopted and refined the system.

A Kidnapping, Arrest, Trial and Sentence

In January 2011 Datta called the undercover agent asking for his help. A former client of Datta’s had been kidnapped in Mexico City. He called on the agent to ask if there was something the agent could do to assist with the release of the victim. Datta did not know this, of course, but the agent had been listening in on his phone calls about the kidnapping.

The agent played along with Datta giving details of the kidnapping. By incredible luck for the agent, the victim was released and Datta was ecstatic and very grateful. Datta booked a flight to New York to personally thank his friend for successfully saving his former client. 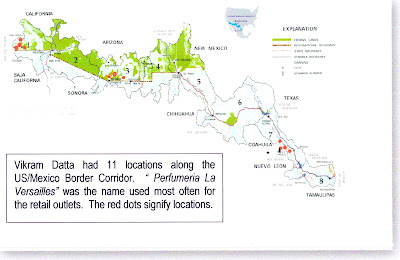 However, when Datta arrived in New York on January 15, 2011, DEA agents were there to welcome him, arresting him and charging him for his participation in an international money laundering conspiracy.

Mahattan US Attorney Preet Bharara stated at the time;

“Vikram Datta allegedly tried to mask dirty money with of all things the scent of perfume”.

The 51-year-old Datta, was sentenced Friday in Manhattan Federal Court to 20 years in prison.

“Datta used his perfume business to remove the stench from Mexican drug cartel money, and now he will pay a steep price for his crimes,” Manhattan US Attorney Preet Bharara said. 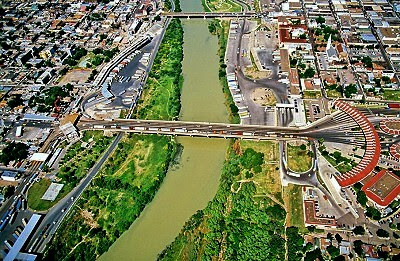 Aerial view of the Laredos, POE and US side on right