Recent data from the Mexican government reveals new details about African immigration to Latin America, illustrating the growth of human smuggling routes from Africa to the Americas.

Figures from Mexico’s National Migration Institute (Instituto Nacional de Migración – INM), reported by El Universal, indicate that nearly 3,700 African migrants -- more than half of whom came from the Democratic Republic of the Congo -- passed through Mexican migration centers during the first six months of 2016. According to elPeriódico, that figure represents a four-fold increase since 2014.

Sources consulted by the news outlets said that the migrants are often detained by Mexican immigration authorities after entering the country. Mexican law prohibits migrants from being kept in migration centers for more than 90 days (pdf), and since most of the migrants' countries of origin lack deportation agreements with Mexico, authorities generally provide them with a document known as an "oficio de salida," or exit permit, which allows them to remain in Mexico for 21 days.

After being granted an exit permit, African migrants often attempt to reach the border with the United States within the three week time limit in order to initiate proceedings to be given asylum in the neighboring country. As a result, Mexican towns bordering the United States are becoming saturated with an influx of migrants.

However, Mexico is rarely the point of entry for African migrants arriving in Latin America. Many migrants first arrive in Colombia or Brazil, paying hundreds or even thousands of dollars to smugglers in order to be transported along routes that run north from South America. (See InSight Crime's graphic below) 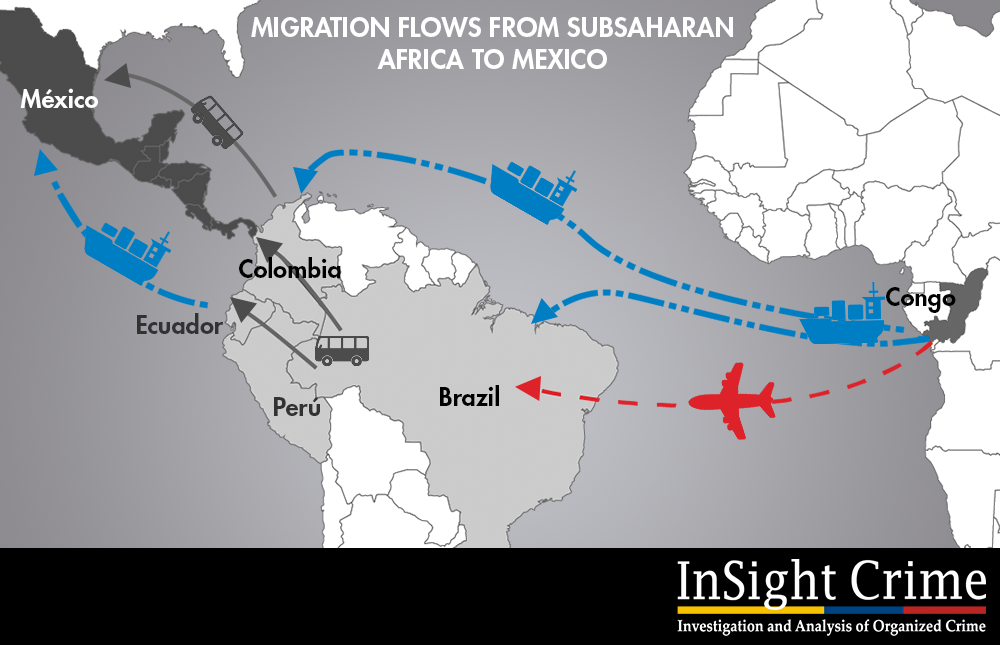 As InSight Crime has previously reported, the increasing number of African migrants entering Latin America has provided human smugglers with a lucrative business opportunity. Ongoing violence and political unrest in many parts of Africa, combined with tightening restrictions on immigration to Europe has likely contributed to this trend.

Additionally, many of the routes used to smuggle African migrants are also used by those fleeing similar conditions in Central America and the Caribbean. And while Mexican authorities have recently announced a new strategy to clamp down on migration routes through through the country, past experience suggest that this is unlikely to slow migration flows. Instead, it could end up benefitting criminal groups, which not only charge migrants substantial smuggling fees, but also often kidnap them and force them into prostitution, drug smuggling and other exploitative industries.

The Birth of the MS13's Mexico Program

MS13 members seeking to escape the gang's strongholds in Central America, or disappear off the radar, often flee to Mexico.