Grafitti displaying the Spanish acronym for the Urabeños
BRIEF

One of Colombia's most powerful criminal organizations is reportedly asking to be included in an ongoing peace process between the government and the country's main guerrilla group, a decision that may have been influenced by increased pressure from state security forces.

In an undated pamphlet bearing the name and logo of the "Autodefensas Gaitanistas de Colombia," better known as the Urabeños, the group praises the government's efforts to reach a peace agreement with the Revolutionary Armed Forces of Colombia (Fuerzas Armadas Revolucionarias de Colombia – FARC).

"The process that led to the signing of a final accord for the termination of the conflict and the construction of a stable and durable peace is beneficial for the country," reads the pamphlet, which appears to be signed by the Urabeños central leadership, known as the "Estado Mayor."

"However," the document continues, "we have also made it known that in order to be able to reach the objective of an integral, stable and definitive peace, all the armed actors generating violence should be included" in the peace process. (See picture below) 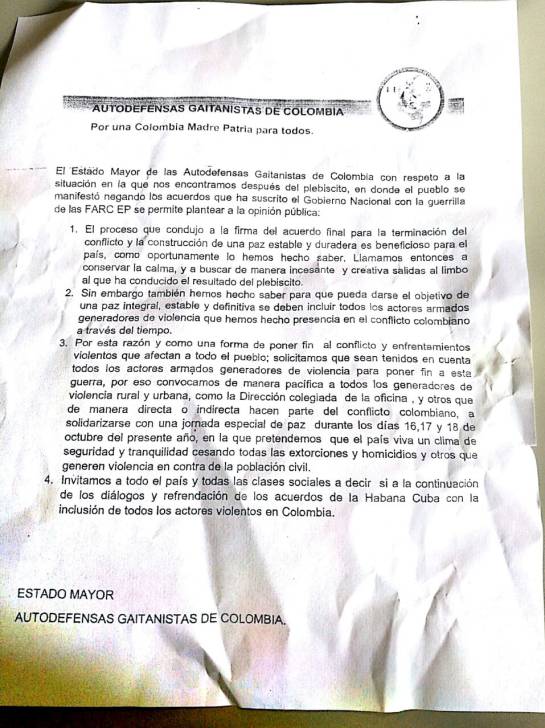 The pamphlet also calls on other armed groups to join the Urabeños in halting extortion and killings from October 16 to October 18 as a demonstration of goodwill toward the peace process.

"We invite the whole country and all social classes to say 'yes' to the continuation of the dialogues and endorsement of the accords...with the inclusion of all the violent actors in Colombia," the message concludes.

The document does not appear on the group's website or social media platforms, and according to multiple local media outlets the government has not yet confirmed or disconfirmed its authenticity.

The Urabeños apparent request to be included in the peace process -- which would offer judicial benefits to militants accused of crimes related to Colombia's long-running civil conflict -- could reflect concern on the part of the group's leadership regarding intensified security operations targeting their organization.

As the conflict with the FARC has wound down, the administration of President Juan Manuel Santos has increasingly directed security resources toward combating organized crime groups, particularly the Urabeños. In fact, the government has mounted a massive ongoing operation aimed at dismantling the Urabeños' leadership that has resulted in the capture of several of the group's top figures, including Estado Mayor member Walter Leguía Moscote, alias "Javier."

Santos has previously rejected the possibility of including groups like the Urabeños in the peace process because, unlike the FARC, his government considers such groups purely criminal organizations with no political aims. However, some analysts disagree on this point, highlighting the Urabeños' past attempts to portray themselves as a paramilitary movement with a political aspect.

Although the Urabeños' credentials as a political movement are debatable, it is clear that the group maintains significant influence over daily life in many areas where it operates. For example, the Urabeños imposed an "armed strike" earlier this year in nearly three dozen municipalities in the department of Antioquia, which completely shut down businesses, schools, transportation infrastructure and even government offices in several towns.

'Cop-Killer' Guns Now Available in Medellin, Thanks to Miami Connection

The Five-seven semi-automatic pistol, capable of piercing body armor, is already a favored weapon of the Mexican cartels. Now there…