An estimated 300 Ecuadorian fishermen have been arrested on drug trafficking charges by foreign authorities in the last three years, highlighting the country's role as a regional hub for maritime trafficking.

The Northern Operations Command of Ecuador's Armed Forces estimate that at least 300 local fishermen are currently in custody in the United States, Guatemala, or Colombia on drug trafficking charges, reported El Comercio. The fishermen are reportedly from the coastal provinces of Manabi, Esmeraldas, Guayas, Santa Elena, and El Oro.

Local fishermen are lured into the illicit industry by members of drug trafficking groups known as “enganchadores.” El Comercio recounts one case of a fisherman who was offered $80,000 to transport a two-ton shipment of cocaine, with $8,000 in cash paid upon acceptance of the offer, and the remainder payable two weeks after completion of the transaction. The fisherman told El Comercio he turned down the offer.

According to El Comercio, last November the wives of 35 detained fishermen signed a petition calling for the provincial government in Esmeraldas to work with foreign authorities so that their husbands could be deported and serve out their prison sentences in Ecuador. 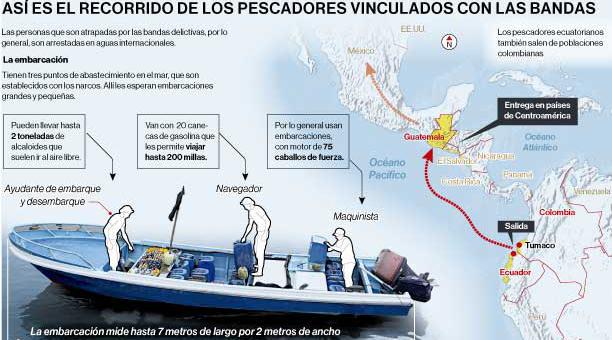 The large number of detained fishermen at high sea is a reminder of Ecuador's importance in the maritime drug trade. Colombia's Marxist rebel group the Revolutionary Armed Forces of Colombia (Fuerzas Armadas Revolucionarias de Colombia - FARC) is known to move cocaine through Ecuador, and shipments often end up in the hands of Mexican cartels that have a presence in the coastal areas. Ecuadorian authorities seized over 13 tons of drugs in just the first two months of 2015, with most of it destined for the international market.

The arrests also underscore the dangers Ecuadorian fishermen face from drug trafficking organizations. As a 2014 El Universal investigative report found, fishermen are tempted by the appeal of quick cash payments but frequently end up in detention or worse.

"If you get involved in [drug trafficking], you will make a lot of money, but afterwards, there are only two ways out: you get killed or you go to jail," a fishermen who had been accosted by drug traffickers told El Universal.