Mexico confirmed that it has begun the process to extradite Joaquín “El Chapo” Guzmán to the United States, but it could be a year or more before the recaptured drug kingpin is handed to the US justice system.

Mexico’s Attorney General’s Office (Procuraduría General de la República - PGR) announced on January 10 that it had launched formal extradition proceedings. In a statement on its website, the PGR said that two Interpol agents had served Guzmán with two warrants in prison. But Mexican officials said Guzmán’s ability to challenge his extradition could mean the entire process could take at least a year, the BBC reported.

The PGR also published an infographic detailing the process (see below), which was initiated with two official requests from the US on June 16 and August 31, 2015, the first coming just before Guzmán escaped from the maximum-security Altiplano jail in July 2015. The process is now at Stage 7 in the infographic, with Guzmán granted three days (beginning January 10) to “pose exceptions” to the extradition requests and 20 further days to prove them. 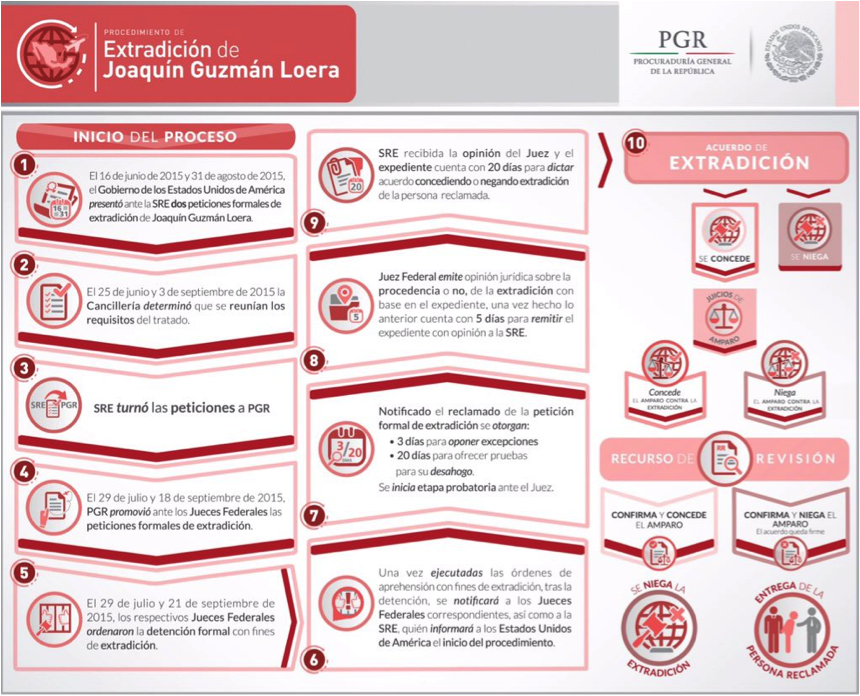 Guzmán is expected to draw this out for as long as possible. His lawyer, Juan Pablo Badillo, who specializes in fighting extraditions, has already filed six separate injunctions (or "amparos," as they are known in Mexico) challenging the requests. These appeals are likely to be rejected, but each requires a judge to schedule a court hearing, and they can be used tactically to delay proceedings. Badillo has already argued that Mexico “must respect national sovereignty, the sovereignty of its institutions to impart justice,” The Washington Post reported.

But as El Daily Post says, Mexico looks set to push ahead and cooperate fully. The government is demonstrating greater resolve than when Guzmán was last captured in 2014. At that time, then Attorney General Jesús Murillo Karam said that Guzmán “must stay here to complete his sentence and then I will extradite him… So about 300 or 400 years later -- it will be a while.”

If and when Guzmán is finally handed over to US authorities, he will face indictments in at least seven different US federal courts for a plethora of charges including drug trafficking and murder. If convicted, the maximum sentence he is expected to face is life imprisonment without parole, The Atlantic said. Mexico will not extradite anyone to the US without the promise that they will not face the death penalty.

Mexico Supreme Court Ruling Pushes Back Against US 'Kingpin List'

In the coming days, President Santos is expected to extradite alleged drug trafficker Walid Makled to Venezuela, instead of the…