United Nations backed prosecutors in Guatemala have filed a new round of charges against top officials of the country’s former government, likening the administration to an organized crime syndicate with jailed President Otto Pérez Molina in the role of mafia don.

Attorney General Thelma Aldana outlined the case dubbed "Cooperacha" (Kick-in) during a June 11 press conference in which at least five ministers and the head of the Social Security Institute in Pérez Molina’s government chipped in a total of more than $4.7 million over a three-year period to buy him luxurious birthday gifts.

Aldana said the money was used to buy the former president a powerboat in 2012, a luxury beach house in 2013, and a $3.5 million 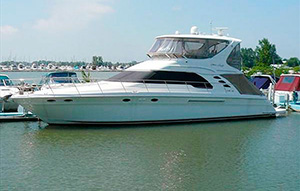 helicopter in 2014. ElPeriodico reported that the items were given to the president during lavish parties marking his Dec. 1 birthday, and also included an armored Jaguar, a Harley Davidson motorcycle and three four-wheel, all-terrain vehicles.

Citing the Pérez Molina administration’s “perverse logic,” Aldana said the gifts were purchased “with the intention of ‘pleasing the boss,’ much like the practice of [members of] organized crime structures that guarantees their position within the hierarchy and their license to operate.” Aldana’s Public Ministry said in its press release that the gifts were paid mostly in cash “to hide the transactions and not leave a money trail” and that much of the money came from public coffers.

Pérez Molina and Baldetti are accused of organizing the collections for each other's gifts. Baldetti’s then-personal secretary, Juan Carlos Mozón, allegedly went around to the respective ministries to collect the cash -- sometimes in bags and at least once in a parking lot -- and arranged for the subsequent purchases.

The Public Ministry reported that three of the former ministers were arrested over the weekend and Guatemala has asked Interpol to issue international warrants against two others believed to be in the United States and Italy. Pérez Molina and Baldetti were already jailed in connection with other cases.

“Cooperacha” follows the “Cooptacion del Estado” (Cooptation of the State) illegal campaign finance case and “La Linea,” in which the former executives and numerous officials and collaborators have been charged with collecting kickbacks through a customs fraud.

In a fourth case, prosecutors have alleged Pérez Molina and Baldetti collected multimillion-dollar bribes for awarding a Spanish firm a contract to manage a container port facility. Taken as a whole, the cases illustrate what one international law expert consulted by InSight Crime characterized as “a classic kleptocracy.” The cases allege the group violated the people's democratic rights by cheating its way into power then used its offices to systematically cash in, either through theft of public resources or kickbacks and bribes.

There can be no doubt that the international effort to help Guatemala address corruption and impunity is paying huge dividends. Without such international backing, it is improbable that domestic prosecutors would have dared to take on these key members of the country’s political elite and shed so much light on the “structural corruption” plaguing the poor Central American nation. Thousands of demonstrators took to the streets for anti-corruption protests, providing additional support.

Observers are now anxious to see how far CICIG and the Public Ministry will be able to trace the money trails, and whether they will be able to implicate members of Guatemala’s economic elite -- what was formerly known as its oligarchy -- who undoubtedly helped finance some of these schemes in furtherance of their own interests.