Ecuador is looking to drastically reduce its military presence along its northern border following the signing of a peace deal between the Colombian government and that country's largest rebel group, a potentially dangerous decision that could create a vacuum in a region still dominated by criminal actors.

On September 26, Ecuadorian President Rafael Correa announced that, with the Colombian government and Revolutionary Armed Forces of Colombia (Fuerzas Armadas Revolucionarias de Colombia – FARC) signing a peace accord, Ecuador would reduce its security presence along the Colombian border by 80 percent, reported EFE.

Before departing for the Colombian city of Cartagena to attend the signing of the agreement, Correa told journalists that 10,000 to 11,000 Ecuadorian security personnel are stationed along the Colombian border, costing his government up to $120 million per year.

Correa added that, in peace processes similar to Colombia's, "around 30 percent of armed insurgents will not demobilize," but rather engage in disorganized criminal activities that "potentially creates a new set of problems."

Nonetheless, Correra said Ecuador and Colombia are working together "to confront this new scenario."

Colombia and Ecuador have a shared border of around 435 miles (700 km), much of it dense, inaccessible jungle that is poorly monitored. In the past, such terrain offered the FARC an advantageous area to establish places of refuge, with certain FARC elements, particularly the 48th Front, even crossing into Ecuador to regroup, resupply, and escape pressure from Colombian security forces.

Now, with the FARC on the cusp of demobilizing, President Correa is understandably eager to draw down expensive security deployments along the border intended to prevent spillovers in violence.

But such a move may have negative consequences for security. Field research by InSight Crime suggests the Ecuador-Colombia border is a region unlikely to experience a large peace dividend following the FARC's demobilization. This is due to the presence of a plethora of other illicit armed groups, most notably Colombia's second largest guerrilla group, the National Liberation Army (Ejército de Liberación Nacional – ELN) and criminal bands (BACRIM, for the Spanish "bandas criminales") such as the Urabeños. (See map) 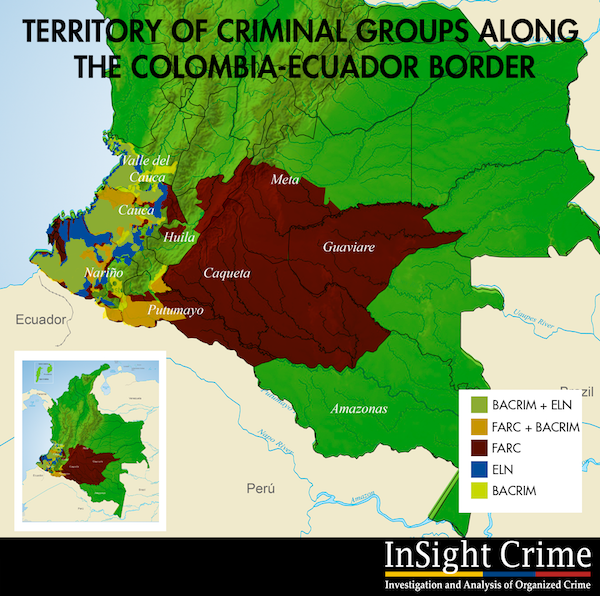 These groups are engaged in a range of illicit activities in the border region, particularly coca production and the drug trade, but also illicit mining. Indeed, the region is crucial drug trafficking real estate, with Mexico's Sinaloa Cartel even having a reported presence in the area. Ecuador has also discovered a number of drug trafficking semi-submersibles near the Colombian border.

As such, the FARC's abandoning of the region -- where it also engaged in criminal activity -- may create a criminal vacuum, likely leading to violence as various groups battle one another to exert dominance over the FARC's former territory. Recent reports also suggest FARC dissidents have been moving into Ecuador, forming criminal structures to capitalize on illicit activities in the region.

With organized crime along the Ecuador-Colombian border potentially about to become much more disorganized, which Correa himself acknowledges is likely to create a new set of security challenges, Ecuador may want to reconsider such a drastic cut to its security footprint in the region.