Members of the Rastrojos
BRIEF

Chaos in Venezuela Contributing to Resurgence of Colombia's Rastrojos?

Ongoing political and economic chaos in Venezuela may be aiding the resurgence of the Rastrojos, once one of Colombia's most powerful crime groups -- a worrying trend in light of the challenges that this development could pose to both countries' security.

Using extensive field research and more than 100 interviews, a recent report from the Ideas for Peace Foundation (Fundación Ideas para la Paz - FIP), titled "Organized Crime and Armed Saboteurs in Times of Transition," outlines how the growing strength of smaller organized crime groups at the local level, including the Rastrojos, may further jeopardize Colombia's post-conflict transition.

The Rastrojos saw their leadership nearly decimated in 2012 when Javier Calle Serna, alias "Comba," surrendered to US authorities in May of that year. Diego Perez Henao, alias "Diego Rastrojo," was captured in June, and the group's last known leader, Luis Enrique Calle Serna, surrendered in October. This instability prompted the atomization that followed, the report found.

Since then, however, the report found that the Rastrojos have had a resurgence aided in part by their growing links to Venezuela, a country currently rife with political and social chaos. Their greatest presence is in Norte de Santander, along Colombia's northern border with Venezuela, where the group takes part in drug and contraband smuggling, primarily gasoline, a precursor in cocaine production.

To continue growing, the Rastrojos have started recruiting Venezuelan nationals and have increased their presence in Venezuela, according to FIP. The ongoing instability and rampant corruption in the Venezuelan security forces provides fertile ground for Colombian organized crime, and the Rastrojos have taken advantage of these dynamics. 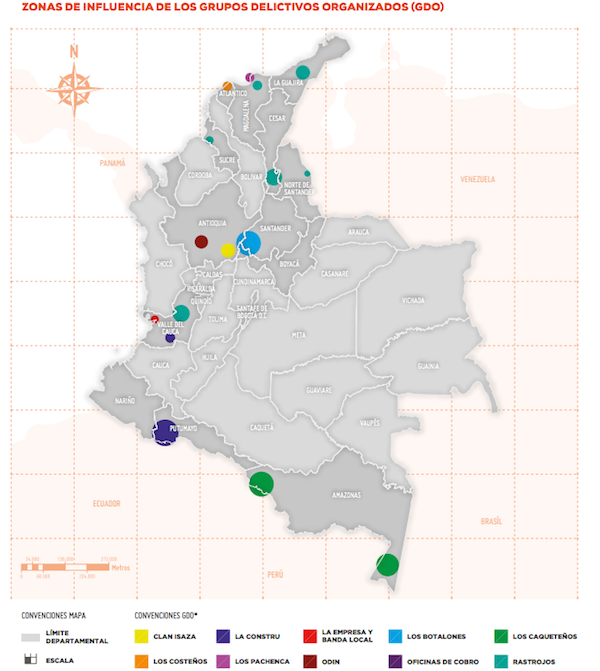 Underworld fragmentation has grown as Colombia moves forward in implementing a peace agreement with the country's largest guerilla group, the Revolutionary Armed Forces of Colombia (Fuerzas Armadas Revolucionarias de Colombia – FARC). As the demobilization process has advanced, new criminal groups have battled it out for control of areas vacated by the FARC.

In October 2016, the Rastrojos fought the Urabeños, one of Colombia's most ambitious drug trafficking organizations and one of the country's last criminal groups with a truly national presence, for control of trafficking routes near Cúcuta, Norte de Santander's capital city. One Rastrojos member was later captured in Venezuela, which the report's authors say suggests the group's growing strength. Additionally, state operations have greatly debilitated the Urabeños in Cúcuta and allowed the Rastrojos to expand and operate in areas once under their rival's control.

The strengthening of smaller, localized organized crime groups like the Rastrojos is particularly concerning for Colombia's peace process, especially in Norte de Santander department where 17 percent of all of Colombia's cocaine was produced in 2016.

As the Rastrojos' links with Venezuela grow stronger, the report's authors suggest that they may become a bridge between international drug markets and still-active Colombian rebel groups like the National Liberation Army (Ejército de Liberación Nacional - ELN) and the Popular Liberation Army (Ejército Popular de Liberación - EPL). This is especially true if the group can assume control in Cúcuta -- something that security officials interviewed by the report's authors suggest is already happening.

Moreover, the Rastrojos have also demonstrated the ability to corrupt members of both Colombia and Venezuela's security forces, the report found, a vulnerability that has been exploited by criminal groups in the border region in the past. This is concerning in light of Venezuela's severely deteriorated security situation, which has been exacerbated by criminal collusion at many levels of government.

Memo Fantasma Faces Up to 40 Years as Lawyer Also Investigated

Alleged drug trafficker alias "Memo Fantasma" or "Will the Ghost," was formally charged during a March 9 virtual audience, of…