The Women Who Want to Leave Coca Behind in Colombia's Putumayo

In Putumayo, as in much of Colombia, female coca growers face a difficult choice: obey armed groups and continue working in illegal economies, or put themselves at risk by seeking alternatives with little help from the government.

During the forum, organized by El Espectador's Colombia 2020 news portal, the women pointed to the risks they face on both sides, either by being involved in cocaine production or by choosing to participate in crop substitution programs in regions controlled by armed groups.

According to Nancy Sánchez, from the women's rights group Alliance of Women Weavers of Life (Alianza de Mujeres Tejedoras de Vida), women working within coca cultivation and  drug production face slave labor conditions and even sexual violence from their employers.

For this reason, many women claim that while participating in coca production has given them some degree of economic independence, it is not a risk they want to be forced to take. But the situation becomes even more difficult, according to testimonies collected by El Espectador, due to the lack of official attention, support and training for those willing to step away.

Others say that the current government has failed to support crop substitution programs implemented under the 2016 peace agreement with the Revolutionary Armed Forces of Colombia (Fuerzas Armadas Revolucionarias de Colombia - FARC).

Flor Zenaida Pantoja, from the Association of Rural Women (Asociación de Mujeres Rurales - Asmural) in Putumayo, claimed that 39 women in her community registered for the National Comprehensive Program for the Substitution of Illicit Crops (Programa Nacional de Sustitución de Cultivos de Uso Ilícito - PNIS.) But she added the women had not received the economic benefits promised in exchange for abandoning coca crops. 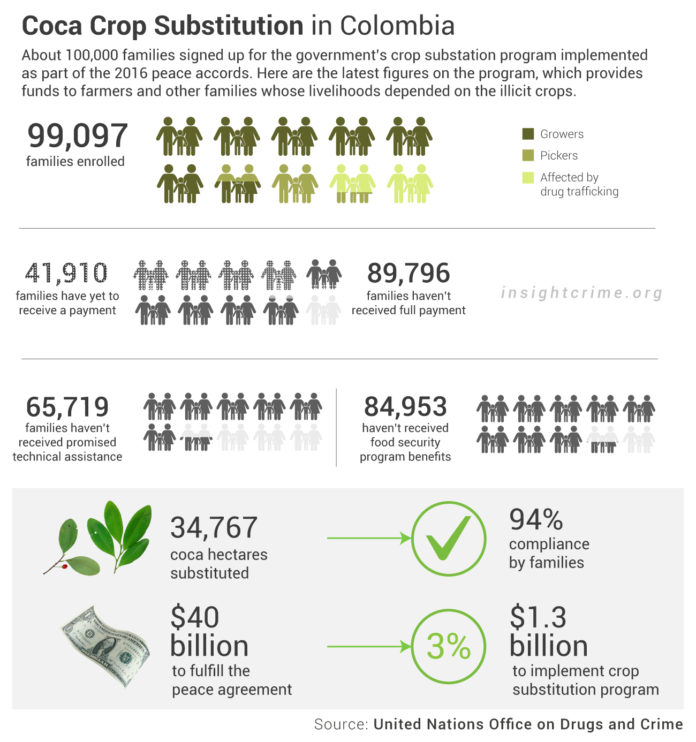 Colombia's effort to help rural farmers cut ties with organized criminal groups have largely failed to realize the unique challenges women face in coca-growing areas. A lack of opportunities, socio-economic needs, family ties and more can handcuff women to a life of coca farming in regions where the presence of the state is rarely felt.

In its investigation, "Women and Organized Crime: Beyond Victims and Victimizers," published in March 2020, InSight Crime was able to corroborate that women in Putumayo continue to be economically dependent on coca.

For example, the national crop substitution program that is supposed to promote legal alternatives has been weakened by the national government and has failed to deliver on many of its promises, including payments, tools and technical training for participants.

This has led to widespread institutional mistrust and uncertainty that has pushed many rural farmers to start replanting coca.

The situation is aggravated by the presence of armed groups. In Putumayo, these include La Constru, the Carolina Ramírez Front, and 48th Front and the 1st Front ex-FARC mafia cells.


As InSight Crime found in its investigation on woman in organized crime, women are all too often the weakest links of the drug chain to exploit.

Mato Grosso do Sul is among Brazil’s most strategic states for transnational crime.