The OIG found the DEA's handling of sources deficient
ANALYSIS

An audit into how the Drug Enforcement Administration (DEA) handles confidential sources found a series of oversights and inconsistencies, further damaging the image of an agency that has been battered by scandal in recent months.

A report regarding an ongoing audit (pdf) being conducted by the Office of the Inspector General (OIG) -- part of the US Department of Justice (DOJ) -- into the DEA’s Confidential Source Program details a number of “significant issues” into how the DEA managed the program.

Specifically, in February 2014, the OIG began examining the DEA’s handling of high-risk activities involving high-level confidential sources. It also evaluated the agency’s allocation of death and disability benefits to these sources.

As defined by the DEA, a confidential source is “any individual who, with a reasonable expectation of confidentiality, furnishes information regarding drug trafficking, or performs an investigative activity.” DEA officials said such sources are a critical part of its law enforcement operations, calling them the “bread and butter” of the agency.

Guidance for US law enforcement agencies like the DEA for establishing, approving, utilizing, and evaluating confidential sources is set out in a guideline from the Attorney General (AG Guidelines). The OIG, however, found the DEA approved a policy that “differed in several significant respects” from the AG Guidelines.

According to the OIG, this has resulted in a lack of oversight of the DEA's use of high-risk individuals as confidential sources (high-risk individuals include those who form part of the leadership of drug trafficking organization, as well as lawyers, doctors, or journalists). (See table below) 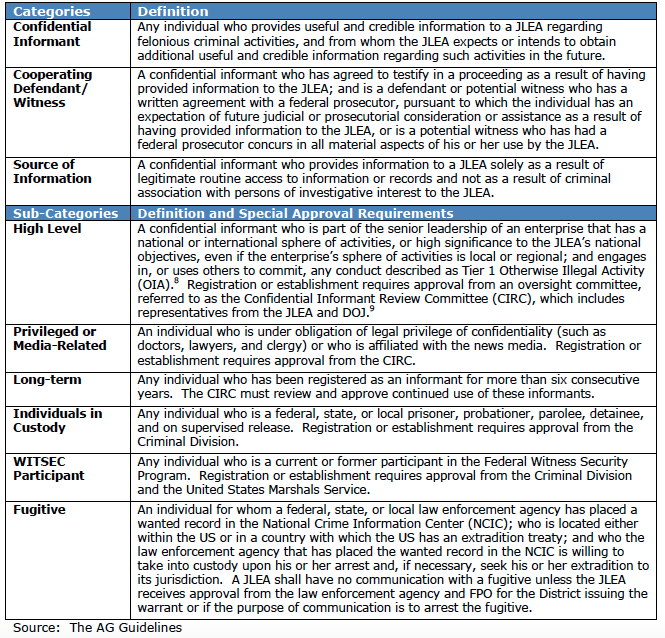 Nor was the DEA adequately following requirements when it comes to dealing with long-term confidential sources -- that is, those in use for six or more consecutive years. Such evaluations are intended to mitigate the risk of a DEA handler “developing an inappropriate relationship” with a source.

Lastly, the OIG discovered the DEA was providing benefits to confidential sources under the Federal Employees’ Compensation Act (FECA). This provides workers’ compensation coverage to federal and US Postal Service workers for injuries or death sustained while performing their duties. However, the DEA was doing so without establishing “a process or any controls regarding the awarding” of FECA benefits. From July 1, 2013 to June 30, 2014, the DEA paid 17 confidential sources and their dependents an estimated $1.034 million.

The OIG -- which will continue assessing the DEA’s Confidential Source Program -- also noted how their work thus far has been “seriously delayed by numerous instances of uncooperativeness from the DEA.”

The DEA has been an agency in crisis since March. That month, the DOJ published a report that found DEA agents in Colombia held sex parties with prostitutes that were funded by local drug cartels. Officers also allegedly received money, gifts, and weapons from cartel members. In early April, however, the DEA released its own internal report, revealing the number of sex parties held, and the extent of the infractions, was much larger than previously believed.

At the time of the misconduct (which began as early as 2001), implicated DEA officers received minimal repercussions from their superiors, with the maximum penalty being just a 10-day suspension. Furthermore, DEA officials made an effort to cover-up these incidents. The scandal eventually forced DEA Administrator Michele Leonhart -- accused of mismanagement and exercising poor oversight -- to resign in April. Her replacement, Chuck Rosenberg, became the DEA’s Acting Administrator in May.

In comparison, shortcomings in the DEA’s confidential sources program revealed during the OIG audit are arguably not nearly as scandalous. Yet they do further tarnish the reputation of the DEA by contributing to an image of the agency as chronically mismanaged. It also lends itself to suggestions the DEA is out of control, playing by its own rules and remaining uncooperative with anyone who might question how it does business.

Brazil's city of Rio de Janeiro is suffering a major security crisis, as gender and religion affect organized crime in…