Verdad Abierta presents a close-up of the small mountain town Colombia has selected to pilot an internationally-supported coca crop substitution project that will be jointly managed by the government and guerrillas with the goal of bringing peace and undermining the country's premiere criminal economy.

Overnight, the municipality of Briceño went from being a forgotten town nestled in the mountains of northern Antioquia to one of the main reference points for Colombia's post-conflict future. Its inhabitants now live between skepticism and optimism.

When the plenipotentiary delegate of the FARC, Félix Antonio Muñoz, alias "Pastor Alape," and the minister for post conflict, Rafael Pardo, appeared on July 11 at the school of Pueblo Nuevo de Briceño, the public was elated. Protocol went by the wayside; those attending the event ignored instructions to be orderly and keep their distance from the dignitaries’ table. A swarm of mobile phones, tablets and other digital devices snapped pictures and took videos.

This article was translated, edited for clarity and published with the permission of VerdadAbierta.com. It does not necessarily represent the views of InSight Crime. See the Spanish original here.

The occasion merited the excitement. It was the first time a senior government official had visited this remote corner of northern Antioquia department. Although many in Pueblo Nuevo had grown up under the influence of the Revolutionary Armed Forces of Colombia (Fuerzas Armadas Revolucionarias de Colombia - FARC), they had never seen a high-ranking guerrilla commander in person.

The hamlet, which normally has a population of fewer than 400, swelled with people. Farmers trekked from other villages near and far to witness the event. The high level delegation’s visit also attracted a bevy of national and local officials, domestic and foreign activists, and numerous reporters, photographers and cameramen.

Local residents were not just drawn by the fanfare. They came to learn firsthand about the plans of the national government and the FARC to implement a pilot project here aimed at putting an end to coca cultivation. The project was of no small consequence to them as coca has been the exclusive source of livelihood for just over 5,000 farmers in the area for the past 15 years.

"We don’t come to eradicate, we come to build a program in association with the communities," rebel commander Muñoz told the crowd. Minister Pardo added: "From this afternoon, we start work on building an alternative."

Pardo said the project would begin work in the next two months with about 2,000 families and 727 farming groups from the towns of Pueblo Nuevo, El Orejón, La Calera, La América, El Pescado, La Mina, Buena Vista, Altos de Chiri, Roblal and Palmichal. The proposal, said the minister, was for farmers to commit to eradicating and not replanting coca while the government implements immediate support measures and develops a strategy for alternative development.

When Did "Green Gold" Begin to Flourish?

Nobody knows for certain how the coca leaf came to cover the mountains of Briceño, but everyone agrees that the first seeds were sown in the early 2000s. Jose,* who has lived in Briceño for more than 20 years, recalled that it was about 2002 when one of his neighbors started to grow coca plants. A year later, residents of the town had abandoned cultivation of cassava, beans, and sugar cane in favor of the "green gold."

"The same thing happened in other hamlets" added the farmer. In the blink of an eye, the illicit crops spread like a plague throughout the 32 hamlets of this area, as well as others. In Briceño they could grow coca without the constant threat of planes overhead spraying glyphosate herbicide or of trucks carrying squads of coca eradicators.

During those early years of the new millennium, the municipality of Briceño was the scene of a battle of blood and fire between guerrillas and their paramilitary enemies. On one side was the 36th Front of the FARC, which had made northern Antioquia its impregnable fortress. On the other side, the Miners Block (Bloque Mineros) of the United Self-Defense Forces of Colombia (Autodefensas Unidas de Colombia - AUC), a war machine that imposed its own law on the towns where it operated.

The armed conflict in Briceño ended up dividing the municipality’s residents, with people in the towns working for the paramilitaries and those in the more rural areas at the service of the guerrillas. "At that time you knew that in town you had to sell to the paramilitaries. But if you were in the countryside, you had to sell to the guerrillas," said a farmer named Carlos. "Once you sold to one of them, you couldn’t sell to anyone else."

The economic life of the municipality was transformed. Almost everything began to revolve around coca. The only gas station in the village began to have difficulty meeting increased demand, as gasoline is a vital ingredient for transforming the leaves to paste. Lowly mule drivers enjoyed a new level of respect as they became the most efficient means to transport barrels, materials, bundles of coca leaf and coca paste up and down the steep mountainsides.

They were times when the area was flush with cash, recalls Carlos. "I’m not exaggerating!" he said. "On the outskirts of town there was a house, where at the end of the month, a man arrived that brought stacks of money to pay for the coca paste. The farmers lined up, because there were many of them. The man weighed the paste, gave them the money, and threw the paste into another stack."

One way or another -- voluntarily or forced by circumstance -- many of Briceño’s 8,000 inhabitants have lived off coca production for the last 15 years. "In this town, at least 90 percent of the people live, directly or indirectly, from coca. I could say that in about 98 percent of the hamlets there is coca," said Briceño Mayor Jose Danilo Agudelo. 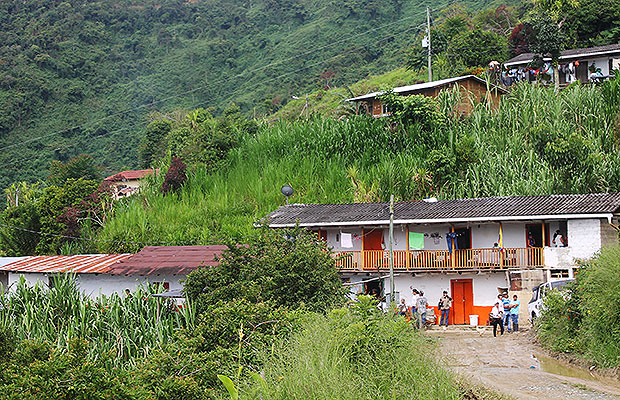 Recent events in Briceño have stirred mixed feelings for many of the area’s residents.

"Without noticing it, we became famous," Julio said as he anxiously awaited the arrival of the visiting dignitaries. "First, nobody knew we existed, and now everyone is watching us."

A lot of attention has focused on Briceño since the FARC and the government announced in Havana that they would jointly implement a unique crop substitution initiative in rural communities, starting with this remote outpost. The initiative is part of the measures aimed at de-escalating the conflict and building trust. The town was chosen in part because it had hosted another pilot project involving both the government and the FARC since June 2015: humanitarian demining.

As the demining project draws to a close and the coca substitution project prepares to get underway, many in Briceño remain highly skeptical.

"It is a question of what will happen when the coca is gone," said Judy Elena Posada, an officer of the women’s association that has operated here for 15 years. "Who will we sell our bread and our products to, if everything here is moved by coca?" The women’s association has 700 members in both rural areas and the towns and foments productive activities like bakeries and tailoring.

Ignacio Jaramillo, president of the Briceño’s community association, said ending the illegal economy was not enough: "What will bring peace is if the farmers have real quality of life."

"All you have to do is look at the municipality’s roads," Muñoz said. "If there is no road improvement, the crop substitution will be a failure. If there is no viable way to transport products from the fields, people will go back to the production of coca."

So What is the Plan?

Despite the statements by both guerrilla and government representatives, residents of Briceño felt there was a lack of clarity. It was clear though, that both sides will work together with rural communities to design a path that responds to the needs of farmers now deriving their livelihood from the coca, and that doing so will remove the primary source of funding for Colombia's armed conflict.

It was also clear that the pilot plan, which will get off the ground in a few months, will be a new experiment in the fight against illegal crops and will be backed by entities that inspire public confidence, including the United Nations Office on Drugs and Crime.

Nevertheless, it will be no easy task. Gabriel Sanchez of the Briceño Farmers Association said the biggest risk is that the government will fail to keep its promises.

"We will develop some proposals, and we hope that they will be heard and included in this path," Sanchez said, adding that "the advance of paramilitary groups is also a concern."

Rather than immediate eradication, the project will start with the gradual substitution of coca crops, which is likely to draw criticism from some political sectors, according to Pedro Arenas, coordinator of the illicit crop observatory at Institute of Studies for Development and Peace (Instituto de Estudios para el Desarrollo y la Paz - INDEPAZ).

Arenas said the plan could work, noting international recognition that the causes of illicit cultivation must be addressed. "In the United Nations … it is now accepted that the indicators for a process of this kind can no longer be the number of plants that are destroyed, or the number of hectares cleared. No, the indicator is development: How much development has materialized in a community like Briceño that has helped to eliminate that which was illegal?"

*Some names have been changed at the request of the sources.

This article was translated, edited for clarity and published with the permission of VerdadAbierta.com. It does not necessarily represent the views of InSight Crime. See the Spanish original here. Photos by Ricardo Cruz.

Peace Dissipates as the Cocaine War Intensifies in Putumayo

The rapid expansion of FARC dissident groups has brought an end to a fleeting period of tranquility in Putumayo. Now,…

Coca farms and cocaine production camps are proliferating in Honduras, showing that the illicit crop has taken root in the…