Joaquin “El Chapo” Guzman’s escape from a Mexican maximum security prison thrusts him, and his longtime criminal organization the Sinaloa Cartel, back into a criminal underworld ripe for expansion.

Guzman’s escape from the Altiplano prison in Mexico State, through a mile-long tunnel starting in his shower, not only represents a grave international embarrassment for the Mexican government, but it also delivers a genuine blow to the government’s previously quite successful efforts to remove the nation of its most dangerous capos.

As the world’s most notorious drug trafficker, heading arguably the world’s most powerful trafficking organization in the Sinaloa Cartel, Guzman represented the government’s most important scalp in its recent efforts to track down the foremost capos. Guzman’s arrest in February 2014 culminated a years-long push to defang the Sinaloa Cartel, which included the death of top lieutenant Ignacio Coronel in a firefight with federal troops, and the death via natural causes of Juan Jose Esparragoza, another longtime Sinaloa boss.

As a result of this series of blows, many analysts saw the Sinaloa Cartel as a spent force. And, in some ways, it was. Guzman's capture was a testament to this weakness.

Now, with his escape, Guzman will presumably rejoin his old partner, Ismael “El Mayo” Zambada, one of the few major names that the authorities have been unable to capture. With the group's international drug routes still very much in operation (see El Daily Post's map below), suddenly prior statements that the authorities had done away with Mexico’s most powerful and venerable organization seem premature. As former Foreign Minister Jorge Castañeda said on Univision following the arrest, “What everyone said about the Sinaloa Cartel being done, that is simply not correct.” 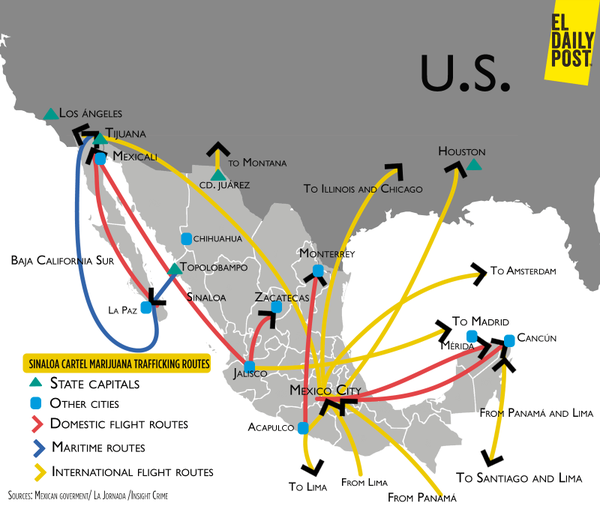 The field appears to be wide open. Unlike the last few years prior to Guzman’s arrest, the Sinaloa Cartel does not have any adversaries of comparable power. Its foremost rivals -- the Zetas, the Gulf Cartel, the Juarez Cartel, the Beltran Leyva Organization, and the Knights Templar -- have been even more buffeted by government pressure than has Sinaloa. The arrests and deaths of leaders of these potential counterweights have served as the fodder for countless triumphant press releases from the current administration of Enrique Peña Nieto and the previous administration of Felipe Calderon. Without them around, there is no group in Mexico that has comparable stature to the Sinaloa Cartel nor its dual leaders.

Logic suggests that this is the perfect time for Guzman to rebuild his group’s hegemony, and swoop into areas where it had previously lost influence. Guzman may see opportunities to once more attempt a takeover of the northeastern corridor, which includes one of the nation’s most important border crossings in Laredo, with only weakened and warring factions of the Gulf Cartel and the Zetas left to oppose him.

Guzman may also turn his attention to Michoacan, now that Servando “La Tuta” Gomez’s arrest has reduced the Knights Templar’s stature. The Sinaloa Cartel may seek to reassert control over the mid-coastal states of Jalisco and Colima, a key entry point for methamphetamine precursor chemicals now under the control of what has become Sinaloa's most formidable rival, Jalisco Cartel Next Generation (Cartel de Jalisco Nueva Generacion - CJNG).

Guzman may indeed attempt to recover control over all these areas, whether through cooptation or confrontation. If he were to have success, the Sinaloa Cartel could once more reassert control over the lion’s share of Mexican organized crime.

However, the current climate also presents difficulties that might prevent this outcome. First of all, it remains to be seen if Guzman can evade capture of any length of time. The level of embarrassment for both Peña Nieto and various US security agencies (who also pursued Guzman for years prior to his arrest) ensure that there will be an intense push to track him down immediately. These efforts will presumably surpass the attempts to locate him in the immediate aftermath of his 2001 escape, when his profile was comparatively low, and they may yet prove successful.

It also remains to be seen if the atomized industry in which Guzman is seeking to reinsert himself will in fact be more conducive to a takeover. Although the opposition may be individually weaker, a larger number of smaller groups presents a different sort of challenge, both for the government seeking to rein them in and a would-be hegemon seeking to overwhelm them. Guzman has shown the ability to wage a long-term battle of attrition against a foe of comparable stature, but in at least one case, he has struggled to stamp out smaller rivals that concentrate their control in a limited area. Many of these smaller rivals may be loathe to sacrifice the independence they have enjoyed in the post-hegemonic modern Mexico.

Whatever the result, Guzman’s escape represents a plate shifting jolt to the nation’s organized crime landscape.