The ELN could be participating in the distribution of Venezuelan government food rations in states along the Colombian border, which may be an attempt by the Colombian rebel group to consolidate its presence in Venezuela and strengthen possible links with President Nicolás Maduro's administration. This is happening at a key moment for both ELN's future and the broader criminal dynamics in the area.

"We are reporting that the government of Nicolás Maduro has handed over the distribution of CLAP boxes to the ELN," Tarazona said. "The rebel group decides who to give them to."

Tarazona says that the boxes are delivered with propaganda for the ELN's Carlos Germán Velasco Villamizar Front. They also promote one of their three radio stations broadcasting in that region of Venezuela. 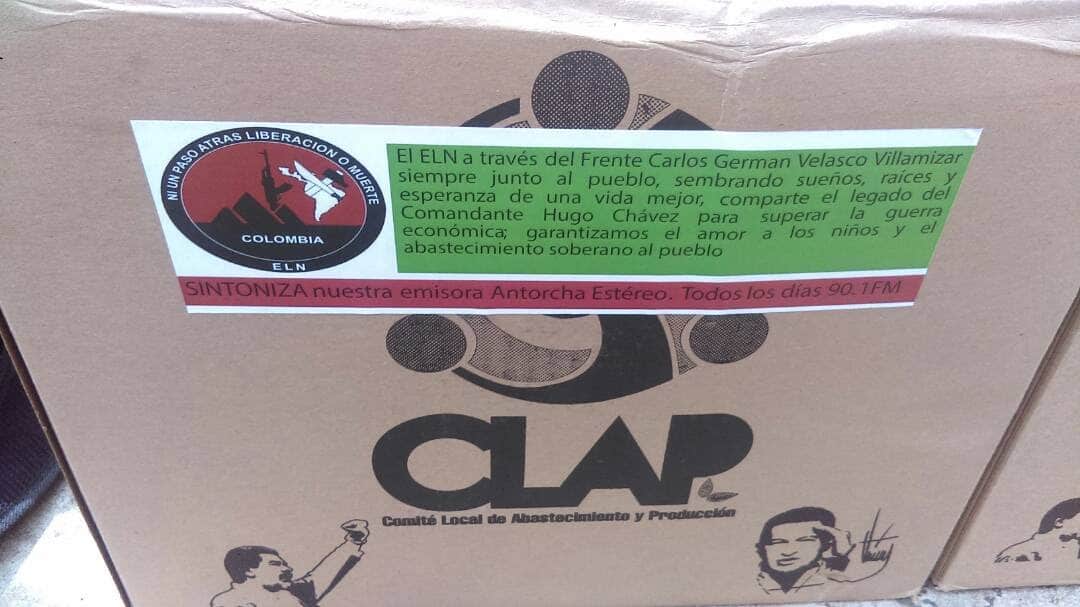 February 7 marks one year since peace negotiations began between the ELN and the Colombian government in Quito, Ecuador. On January 29, the government decided to suspend the talks due to a wave of attacks carried out by the group in a number of locations throughout the country.

Adding to the situation, just when the peace talks reached their one-year anniversary, a leader of the ELN's Western War Front (Frente de Guerra Occidental) announced a three-day nationwide armed strike and confirmed to InSight Crime that the order came directly from the group's top leadership.

The presence of the ELN in Venezuela and its links with the Maduro administration are not new. For many years, the ELN has carried out criminal activities in Venezuela and has taken refuge from Colombian authorities in the area. It has even been established that some of the guerrilla group's leaders live in Venezuela or have a significant presence there, especially in border states such as Apure and Táchira.

However, these new developments warrant attention because the current situation on the Colombia-Venezuela border is becoming increasingly complex due to the massive migration of Venezuelan citizens affected by the country's economic and social crisis, a phenomenon that has proven to be a boon for crime groups. In this context, the ELN may be seeking a rearrangement that lets continue to operate in Venezuelan territory, while consolidating its position in case the peace talks with the Colombian government collapse.

SEE ALSO: Profile of the ELN in Venezuela

The report on ELN's participation in the distribution of Venezuelan government food rations comes a week after the Maduro administration named Freddy Bernal as "protector" of the state of Táchira. Bernal is a key figure in Venezuela's governing party who has had ties to illegal armed Colombian groups and pro-government paramilitary groups known as "colectivos." While no evidence has been obtained that links Bernal with the ELN, his political background raises the possibility.

In fact, in addition to his new post as protector of Táchira, Bernal is also in charge of CLAP administration and operations. Throughout his tenure with the food distribution program, several allegations have been reported on the participation of the colectivos in the selective distribution of food rations to communities where the colectivos have territorial control. This has been interpreted as a social control mechanism in which armed actors are used to ensure the regime's power and popular support through the provision of food, which is often absent from supermarket shelves in Venezuela.

It is therefore also possible that the Venezuelan government, which has been tolerant of the ELN, is now turning to the group as an ally in its effort to assert control over territories where the government lacks a legitimate presence. The government's end goal is likely to regain some presence in the border area, where the criminal dynamics of various groups have been in flux due to the massive emigration from Venezuela and the demobilization of the ELN's guerrilla cousin, the Revolutionary Armed Forces of Colombia (Fuerzas Armadas Revolucionarias de Colombia - FARC).

How Venezuela Became a Cemetery for the ex-FARC Mafia Leadership