Last year’s shocking increase in Jamaica's homicide rate has refocused attention on lottery scams in the Caribbean island nation. But it is not a uniquely Jamaican problem, with well-organized lottery frauds operating throughout the Americas, costing the United States hundreds of millions of dollars each year.

The total number of killings in Jamaica jumped to 1,192 in 2015, a 20 percent increase from the previous year with the majority believed to be gang-related. Authorities point to violence between lottery scam rings fighting over profits and valuable “lead” or contact lists as the major cause of the spike. This type of advance fee fraud usually targets elderly Americans but also fuels gang warfare in the origin country as rival scam rings compete for resources.

To give just one example, the massacre of six family members in Kingston last October was linked directly to lottery scam rings. Jamaica's National Security Minister, Peter Bunting, said at the time that this “heinous crime shows that scamming not only affects those who participate and directly profit from it, but those who associate with them,” reported Fox News.

Advance fee frauds involve calling or emailing unsuspecting targets claiming to offer money -- in the case of lottery scams, a winning ticket -- which can only be redeemed after a fee has been forwarded. (See the Wall Street Journal's graph below of how Jamaican lottery scams work) Other forms of advance fee scams include Nigeria’s notorious "419" fraudsters, who send out emails offering a range of bogus prizes and rewards, resulting in millions of illicit dollars flowing into the West African nation each year. 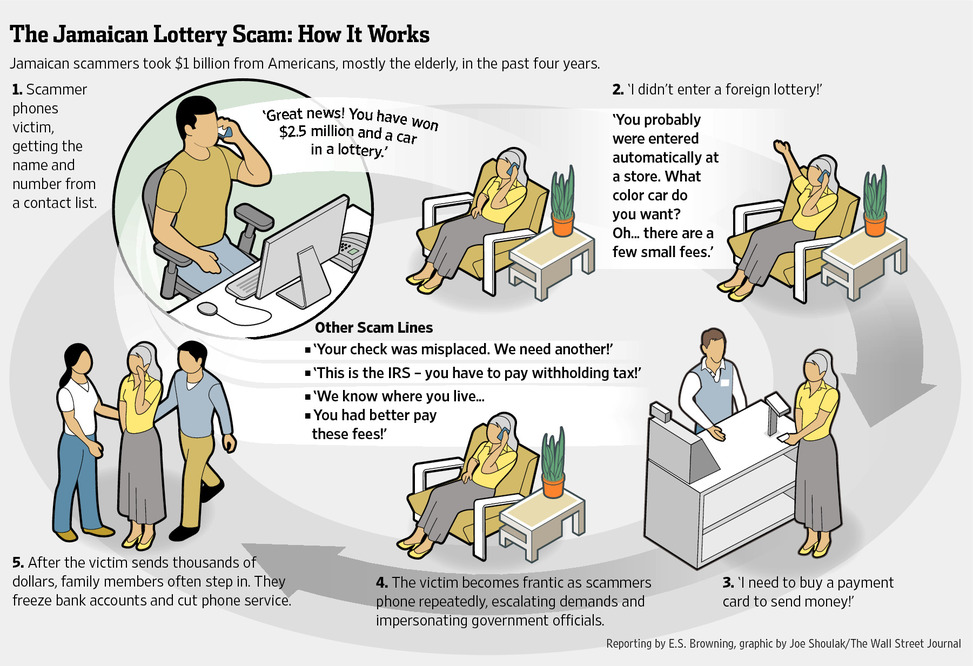 While US citizens tend to be the main targets of lottery scams, the scammers themselves can come from all across North and Central America. Jamaican fraudsters are currently thought to be the most pernicious, but two years ago a network of US citizens working out of Costa Rica ran a damaging scam operation for years before being brought to justice. In Jamaica and Costa Rica the scams are an undesirable side effect of a burgeoning offshore call center industry, although scams have also originated in Canada, Spain and even the United States.

The immediate victims are nearly always the old and infirm. US citizens have been targeted especially by Jamaican fraudsters, and at times the consequences are much more tragic than simply monetary loss. In October 2015, Albert Poland Jr., an 81-year old American man with Alzheimer’s and dementia, was driven to suicide after repeatedly sending money to Jamaican lottery scammers. His story drew international attention to the scams, fueled by a widely shared CNN report.

Amid this wave of fraud operations targeting US citizens, authorities are taking steps to bring foreign-based scammers to justice. In a landmark case in May 2015, Sanjay Williams became the first Jamaican citizen to be convicted of lottery scamming. Having operated with impunity for years in Jamaica, he was finally captured, extradited, and found guilty of conspiracy, wire fraud and money laundering. He was sentenced to 20 years in prison in December. Several expatriates from the US and Canada have also been arrested and convicted of having managed a lottery scam from Costa Rica, according to the Tico Times.

Despite the gains made against some high-profile scammers, challenges remain. Building an extradition case requires amassing first-person affidavits from multiple victims, as well as maintaining a high level of coordination between US and foreign officials.

Meanwhile, the potential profits will surely continue to attract more criminal opportunists to lottery scams. The most seasoned scammers can earn several millions of dollars during the course of their criminal career. The US Federal Bureau of Investigation said Williams and another rival ringleader, Lavrock Willocks, had swindled more than $5.6 million from some 80 victims, the Jamaica Observer reported. This is just a fraction of the estimated $300 million that flows to Jamaica from the US every year via lottery scams, according to CNN.

The exact connection between drug gangs, which have fragmented since the fall of notorious drug trafficker Christopher "Dudus" Coke, and the lottery scam rings remains unclear. It is possible, however, that this fragmentation has caused some drug gangs to move into lottery scams. If true, this would present even greater challenges for authorities struggling to rein in a ballooning homicide rate that consistently ranks among the highest in the region.

Following years of pressure by environmental groups, Costa Rica has passed a comprehensive ban on shark finning, outlawing not only…

On a visit to Mexico, Costa Rica's President Laura Chinchilla signed agreements with her counterpart Felipe Calderon to strengthen the…