M-16 confiscated from a gang in El Salvador
ANALYSIS

The government of El Salvador's militarized campaign against the country's street gangs has been met by an increasingly heavily armed reaction. El Faro's investigation indicates that the gangs' growing use of assault rifles is an echo of the civil war that ended almost 25 years ago.

"Our presumption is that many are from the civil war," responds Mauricio Ramírez Landaverde, the Minister of Public Security, when questioned on the origin of the weapons that Salvadoran officials seize from the gangs with increasing frequency. The minister's response refers to all firearms in general -- shotguns, pistols, revolvers, etc. -- but applies to one type of weapon in particular: assault rifles.

Salvadoran law classifies these automatic weapons -- primarily US M-16s and Russian AK-47s -- as "weapons of war," and their possession by the general public is strictly prohibited.

*This article was translated, edited for clarity and length and published with the permission of El Faro. It does not necessarily represent the views of InSight Crime. See the Spanish original here.

Between 2011 and 2014, the National Civil Police (Policía Nacional Civil – PNC) confiscated, on average, a rifle each week. Through the first five months of 2016, however, this average rose to one every three days. And these are just the official figures, meaning they do not include weapons that security forces confiscate from criminals but do not report.

"When the war was only with the other gang, it was better to have a pistol or revolver, because those are easier to hide," says a veteran member of the Barrio 18 gang over the sound of gunshots in the neighborhoods of Salado.

"And now? Now we are fighting a war against the government, and it is better to have more powerful weapons because we know the police are coming to kill us."

The war between the state and the gangs was tacitly declared in January 2015, when President Salvador Sánchez Cerén, a former guerrilla commander, closed any options for dialogue and opted for armed repression. "Some say we're at war, but there is no other way. They are criminals, and should be treated as such," Sánchez Cerén declared in March 2016.

During wartime, weapons of war are used. Until 2014, the PNC reported annual seizures of approximately 50 to 60 assault weapons, the vast majority confiscated from gangs. In 2015, that figure jumped to 92. And if the pace of the first few months of 2016 holds, the year will finish with around 125 seizures of such weapons.

The gangs increasingly prize assault files. According to a gang member who served as a witness for the Attorney General during the "Opicio Massacre" case, in April 2016 the Barrio 18 Revolucionarios in Quezaltepeque had eight M-16s and three AK-47s. That's at least 11 assault rifles for a small gang faction operating in just two municipalities.

"The arms market is … like that for tomatoes. The price goes up and down depending on demand and supply. Sometimes there is a shortage, as with drugs, which is when the price rises," Shadow, a veteran gang member, says ironically about the current situation.

The historical paradox is that the same M-16s and AK-47s now being fired by gang members may have been wielded by fighters of the Farabundo Martí National Liberation Front (Frente Farabundo Martí de Liberación Nacional – FMLN) three decades ago. The FMLN is today the political party in power that is fighting the gangs. 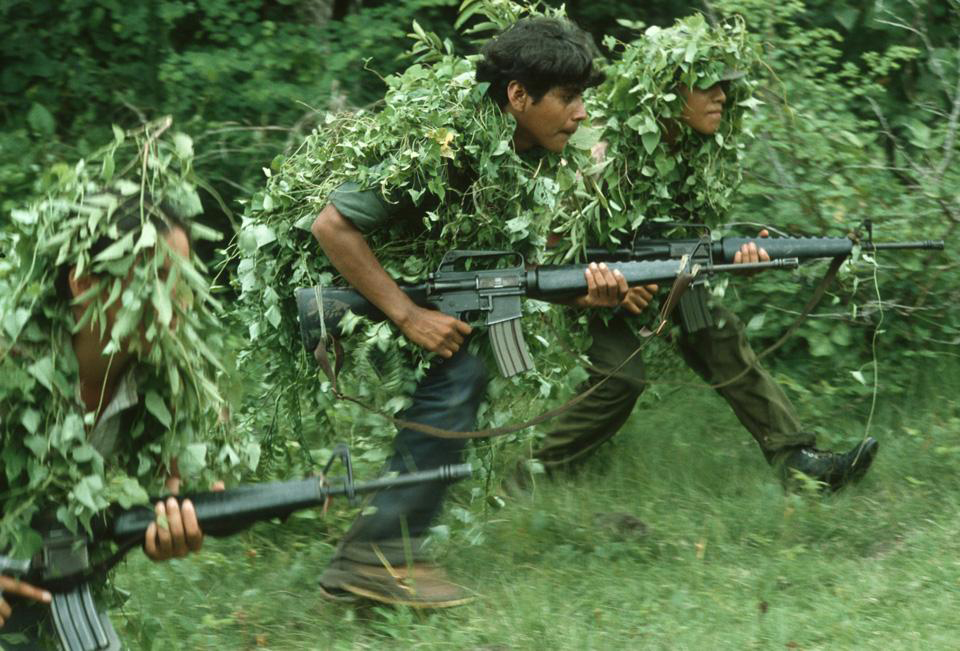 FMLN rebels train with M-16s in 1983 that have been left in Vietnam by US. Photo c/o Giovanni Palazzo/MUPI

José Miguel Cruz -- director of the Institute of Public Opinion (Instituto Universitario de Opinión Pública – IUDOP) at the Universidad Centroamericana José Simeon Cañas (UCA) from 1994 to 2006, and current director of research at Florida International University -- has invested the most time studying the proliferation of weapons following the war and the phenomenon of the gangs. When asked if he thinks the same weapons used by guerrillas a quarter century ago are today in the hands of gang members, Cruz answered, "No doubt, some are."

The nature of the phenomenon makes it imposible to know the exact number of gang rifles that were once carried by guerrillas, soldiers or members of death squads, but the most recognized experts agree that it is somewhat common.

Minister Ramírez Landaverde's assertion that "we presume that many are from the armed conflict" carries significant weight given his position overseeing the police, who are in charge of confiscating and analyzing gang weapons. "The type of weapons, the caliber and individual characteristics make us believe that they are from the war."

Defense Minister David Munguía Payés agreed. "We have noticed in recent months that the criminal groups have increased their weaponry, and that is because there are a lot of weapons left over from the armed conflict of the 1980s," the general said.

Cruz, who co-authored a book on firearms in El Salvador, said the country's black market for weapons is "very vigorous" as a result of "the current war between the government and the gangs, and some of those guns come from our old armed conflict." He added that some mid-level commanders sold weapons on the black market after the war and some individual combatants kept their rifles and have been selling them off with the passage of time.

"Nobody knows for certain how many weapons ended up in civilian hands after the war, because the institutional efforts to collect them did not work. They were totally flawed," Cruz wrote in his book. Sixteen years later, Cruz reiterated that opinion. "In El Salvador, there was never a concerted effort to collect the weapons of the war," he said.

Members of the different gangs confirmed that assault weapons are more sought after since the government delared war on them. They also say that many of their weapons date back to the 12-year civil war, which ended in 1992. 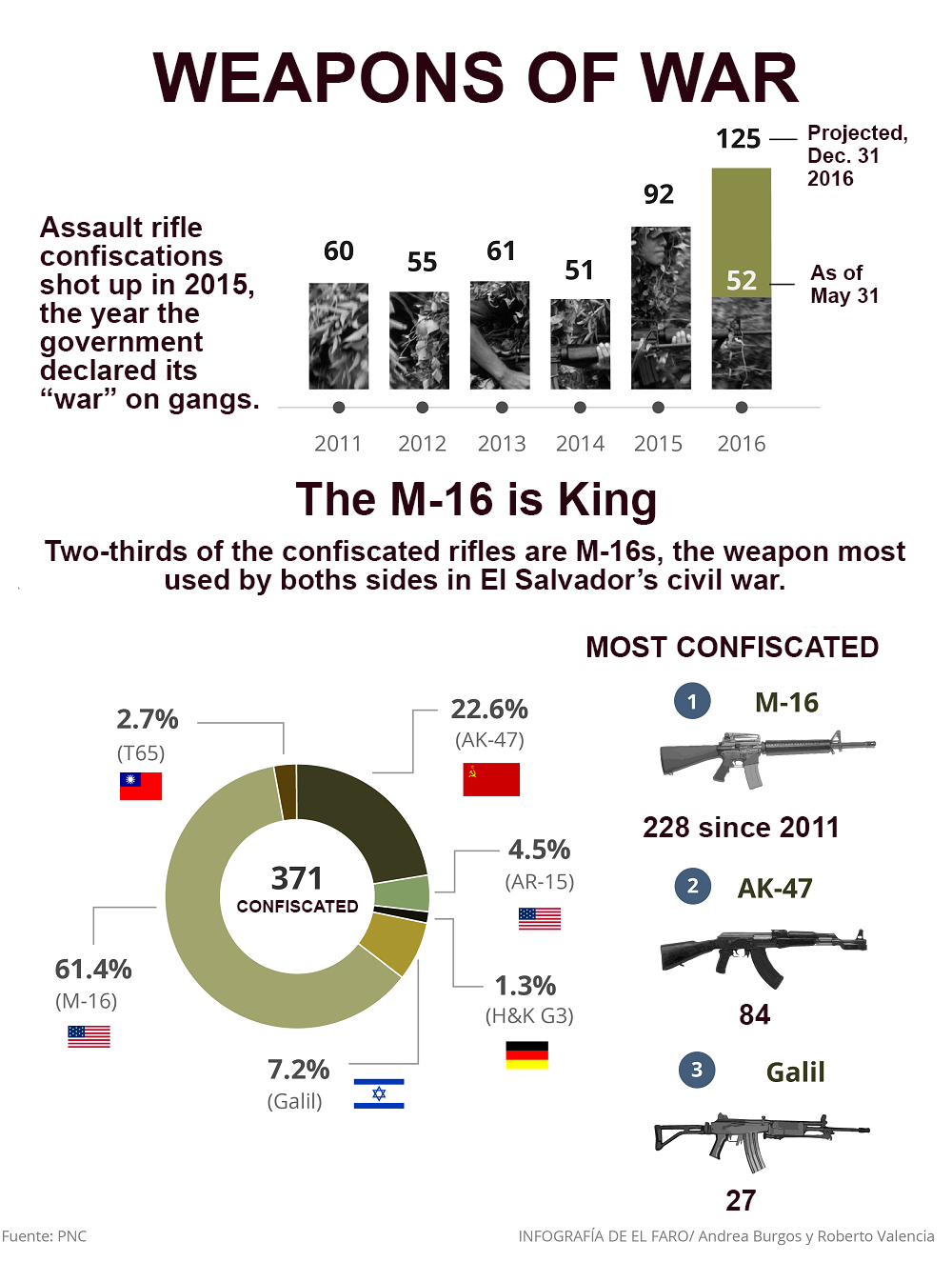 Gang members get weapons left over from the armed conflict in a number of ways: conventional arms traffickers with ready inventories; a former guerrilla fighter who was put in charge of guarding a weapons cache during the war and decides it is time to sell them to the highest bidder; members of the police and military who steal confiscated weapons during the different links in the chain of custody, selling them back into the black market; or the gang member who is the son of a former combatant and brings the family weapon to the gang.

Nevertheless, the ministries of Security and Defense also say gangs have rifles that were not in the country during the war. These weapons come from Central America's robust black market for arms and generally supply organized crime groups. Some were taken from the armed forces after the war, and others are stolen or bought from individuals and security companies that are licensed to legally purchase them.

Ana Guadalupe Martínez, known as FMLN commander María during the war, acknowledged the possibility that rebel assault rifles have made their way onto the black market.

"More than one guerrilla kept their weapons for personal use. Other organizations might not have turned in everything," Martínez said. "It also happened that people who were in charge of guarding caches died, and those arsenals remain hidden until a farmer or someone else finds them."

The guerrillas started to get their hands on large numbers of M-16s beginning in 1983 and 1984. The assault rifles formerly belonged to the US army and were abandoned in Vietnam when the United States withdrew. In terms of AK-47s, the varied models seen in El Salvador were imported towards the end of the war, after 1987. 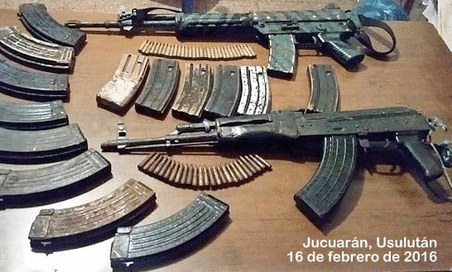 AK-47 assault rifles confiscated from gang members by the PNC.

Some of the assault rifles being used by gang members can be traced back to the Salvadoran armed forces, according to congressman Rodrigo Ávila Avilez, a former head of the National Civil Police and one of the country's foremost weapons experts.

"Weapons of the armed forces also ended up in the hands of criminals, of private citizens, especially at the beginning of the war when control over inventories were less strict," Ávila Avilez said. "But those guns are very few compared to the number the guerrillas were able to store in a clandestine manner."

Ávila Avilez said there are four reasons why the gangs have so many weapons of war. For one, the FMLN hid some of its weapons in case the peace process did not pan out, and those guns eventually made their way onto the black market. Another reason is that middle- and high-ranking commanders of both the armed forces and the guerrillas kept their guns to make money off of them. A third reason is the underground weapons caches that were kept secret from all but a few individuals. And lastly, there were excombatants who held on to a weapon or two as souvenirs of the war.

*This article was translated, edited for clarity and length and published with the permission of El Faro. It does not necessarily represent the views of InSight Crime. See the Spanish original here. Valeria Guzmán contributed to this report.

After a seizure of disassembled guns found in vehicles shipped from the United States to Chile, a prosecutor warned that…