Mexico's homicide rate reached its highest level in two years in February, and the state of Colima displaced Guerrero as having the most reported homicides in the country.

The February 2016 average of 55 homicides a day is the highest rate since the official registry for homicide victims began publishing figures in January 2014.

This article originally appeared in Animal Político and has been translated, edited for clarity, and reprinted with permission. Its views do not necessarily reflect those of InSight Crime. See Spanish original here.

Mexican security expert Alejandro Hope noted that February's daily murder average is important because it confirms the incidence of homicides has almost returned to levels seen at the beginning of President Enrique Peña Nieto's term.

"Basically, the gains made in reducing homicides during the second half of 2013 and throughout 2014 have reversed. We've returned to the levels of violence seen at the beginning of the administration, and at the rate we're going we might even return to averages we saw in 2012," Hope said.

Hope estimated that 2016 could close with a national homicide rate of about 20 per 100,000 inhabitants, which would confirm an increase over 2015. This growth is not isolated.

"During February we had cases of extreme violence like Topo Chico in Nuevo León (where nearly 50 people died). This marks an upward trend that is being recorded in various parts of the country, and the proof is that states like Colima appear along with Guerrero and Sinaloa with the highest crime rates," Hope said.

Kidnappings were also up in February. According to data from the organization Stop Kidnapping (Alto al Secuestro), complaints increased 13 percent compared to the same month last year. The organization said the increase comes despite the under-reporting of cases, with 44 kidnappings not reported to authorities.

The increase in homicides druing the first two months of 2016 affected more than half the country, or 18 of Mexico's 31 states and one Federal District. Five states saw increases of more than 100 percent.

Alcapulco's state, Guerrero, was displaced as Mexico's murder capital for the first time in four years. Colima now occupies that position for the first time, with an increase in excess of 300 percent. In the first two months of 2015 the state did not even appear among the worst five for homicides.

Despite being displaced from the top of the list, violent death is still a big problem for Guerrero, where the 326 homicides registered in the first two months of 2016 represented a 17 percent increase compared to the 278 victims recorded during the same period in 2015.

"At this pace, after one more year of rising homicides we will again be at 2012 violence levels."

Sinaloa, another state with a significant increase in homicides, saw 117 murders during February. This marked a 50 percent increase over the same month of 2015, and gave the state the third highest murder rate in the country.

Veracruz, Nuevo León, Campeche, and the Yucatán also saw homicides increase by more than 100 percent during the first two months of the year.

Although the rise in homicides in some of these states has publicly been attributed to issues like organized crime, Hope said it should be the government that gives an explanation and criticized authorities for not doing so.

"They say nothing, but at the rate we're going the data from INEGI will almost surely close at 23,000 homicides (for the year). At this pace, after one more year of rising homicides we will again be at 2012 violence levels," said Hope. 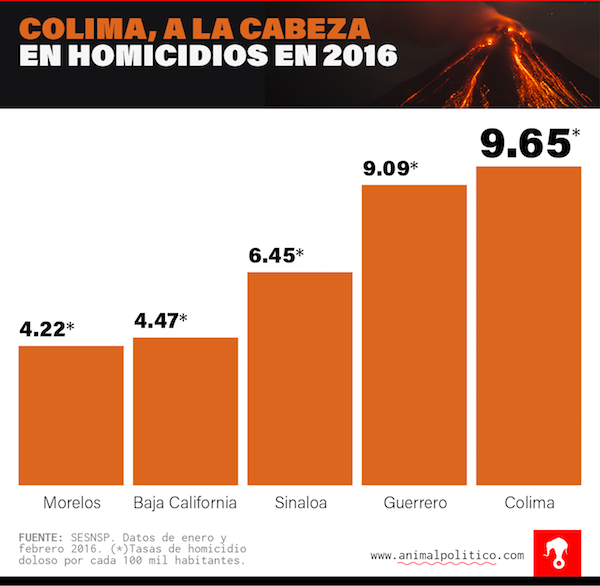 Standing out among acts of violence during February is the brawl that occurred in the Topo Chico prison in Nuevo León on February 11, which left 49 dead and a dozen more wounded. This riot was responsible for Nuevo León's doubling of homicides during the month.

In the Federal District, on February 25 four people were murdered in a house in the neighborhood of El Rosario. City authorities presume that the case is related to retail drug sales.

February violence also claimed the life of a journalist. In this case it was the reporter Anabel Flores, who on February 8 was kidnapped from her home in the city of Orizaba and was found dead 24 hours later in the state of Puebla. State authorities attributed the murder to organized crime.

For all the killings in February, the National Security System reported that it opened 1,477 preliminary investigations, the highest figure for the month of February since 2012, when the number was 1,679. 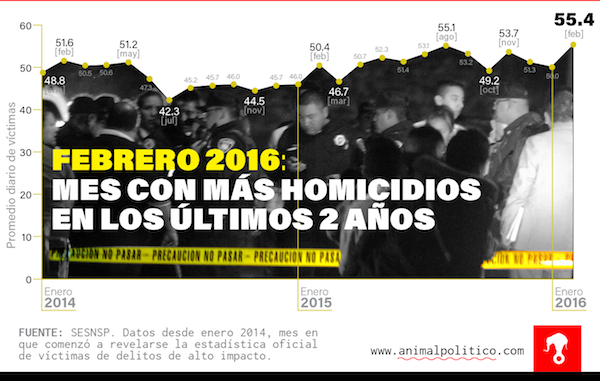 The organization Stop Kidnapping reported 155 kidnappings during February nationwide, with a total of 201 victims. Only 111 of those cases were the subject of a preliminary investigation.

At a meeting on the issue, SNSP officials indicated they are preparing legal reforms to oversee the registration of crimes at the state level.

"If the authorities still do not open preliminary investigations or open files on investigations despite having knowledge of a kidnapping, they not only incur administrative and/or criminal liability, but are oblivious to the reality of our country on the subject kidnapping," Wallace said.

*This article originally appeared in Animal Político and has been translated, edited for clarity, and reprinted with permission. Its views do not necessarily reflect those of InSight Crime. See Spanish original here.

Villa Española and Peñarol in Uruguay’s capital, Montevideo, have become the center of fighting between local drug trafficking gangs.

A wave of violence has rocked the small Haitian town of Croix-des-Bouquets, shining a light on how this strategic area…