Politicians often make lofty promises about reducing homicides and improving citizen security, but which Latin American and Caribbean countries actually achieved this over the past year? Find out in our annual homicide report. 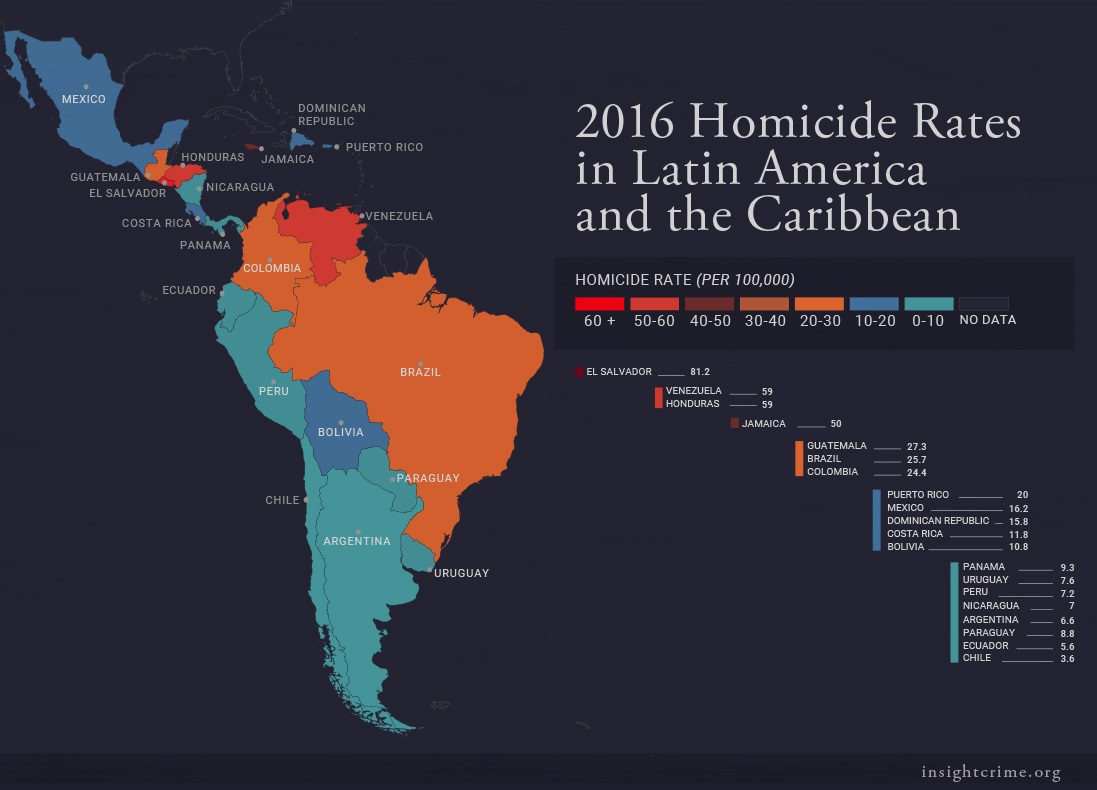 Despite a significant reduction in violence last year, El Salvador is once again the most homicidal country in Latin America. The National Civil Police registered 5,278 murders last year for a homicide rate of 81.2 per 100,000, down from the 104 per 100,000 recorded in 2015.

After a bloody start to the year, homicides fell precipitously in April, shortly after the country's principal street gangs announced a non-aggression pact and the government began implementing "extraordinary measures" designed to cut off communication between incarcerated leaders and their counterparts on the streets. Both sides quickly claimed credit for the drop in violence.

The country's homicide rate has fluctuated significantly in recent years. Murders began going down in 2012 following the implementation of a gang truce, but began to rise again in 2014 as the truce crumbled. The homicide rate eventually reached levels unseen since the country's civil war in 2015 before falling again last year.

Venezuela's actual homicide rate is almost certainly higher than 59 per 100,000, and perhaps much higher. In a year-end report, the Venezuelan Violence Observatory (Observatorio Venezolano de Violencia - OVV) estimated that there were 28,479 "violent deaths" in 2016, which translates to a violent death rate of 91.8 per 100,000. Of those deaths, 18,230 were classified by the government as homicides while the rest were either cases of "resisting authority" or were not labelled a homicide because the killer's intent was unclear. OVV Director Roberto Briceño-León told InSight Crime via email that the homicide rate stands at 59 per 100,000 if the other two classes of violent deaths are not included.


However, as Briceño-León himself pointed out, "the problem is not the homicides formally recognized by the government, but rather those that are hidden beneath other categories in the data." The Venezuelan government rarely publishes official crime statistics, making it difficult for non-governmental organizations and media outlets to determine the country's real homicide rate.

The Violence Observatory at the National Autonomous University of Honduras (Universidad Nacional Autónoma de Honduras - UNAH) announced in early January that the country finished 2016 with 5,154 homicides, nearly identical to the 5,148 registered the previous year. The data was reportedly verified by security officials as well as the medical forensics team within the Attorney General's Office.

Considered until recently the murder capital of the world, Honduras has seen homides fall since reaching a peak of 86.5 per 100,000 in 2011. While it is difficult to determine how much of the violence is gang-related, according to UNAH guns are used in over 80 percent of all homicides, roughly double the global average.

The spokesperson of Jamaica's Constabulary Force, Stephanie Lindsay, says there were 1,350 murders in 2016. This represents an 11 percent increase from 2015 and is translates to a homicide rate of 50 per 100,000. Some 70 percent of the murders in 2016 were gang-related, according to Lindsay.

Guatemala's National Civil Police reported there were 4,520 homicides in 2016, 258 fewer than in 2015. The country's murder rate fell from 29.5 per 100,000 to 27.3, continuing a trend seen in recent years following a high of 46.5 per 100,000 in 2009 (pdf). President Jimmy Morales is planning to highlight the drop in violence during an upcoming presentation of his administration's first year in office, according to CNN en Español.

The Brazilian Public Security Forum tallied 52,463 homicides during the course of 2015 (pdf) -- the most recent year for which official nationwide statistics are available -- for a murder rate of 25.7 per 100,000. However, the organization noted that it includes killings involving both on- and off-duty police officers, which have long been notorious for their widespread use of excessive force; Brazilian police killed an average of nine people per day in 2015. The World Bank, which does not include this type of violence in its homicide statistics, posted a slightly lower homicide rate for Brazil in 2014 at 24.6 per 100,000.

Police data released in early January shows that there were 679 homicides in Puerto Rico during 2016, a 15 percent increase from the previous year. This converts to a homicide rate of 20 per 100,000.

Mexico witnessed 20,858 homicides during the first 11 months of the year, according to the Executive Secretary of the National System for Public Security (pdf), the bloodiest year since President Enrique Peña Nieto took office in December 2012. This represents a homicide rate of 16.2 per 100,000, with an upswing of violence during the second half of the year. Over 2,000 homicides were registered each month between July and November, the first time any month had reached that benchmark since the current system for counting murders was implemented in January 2014.

Colima had the highest homicide rate of any Mexican state at 89 per 100,000, and suffered an almost 300 percent rise from 2015. Guerrero placed second with a rate of 70 per 100,000. Both states, which are located in the country's southwest Pacific coast, are home to criminal gangs engaged in violent battles for control of drug production and trafficking in these areas.

The Interior and Police Ministry announced in October that the country witnessed 1,194 homicides during the first nine months of 2016 for a murder rate of 15.8 per 100,000. The homicide tally represents a decrease of six percent compared to the first nine months of 2015, according to the authorities, and is down significantly from the country's 2011 murder rate of 26.3 per 100,000.

Costa Rica's Judicial Investigation Body recorded 577 homicides in 2016, 19 more than the previous year. This slight increase budged the homicide rate from 11.4 per 100,000 in 2015 to 11.8 in 2016. Approximately 20 percent of the murder cases were related to organized crime, according to the OIJ statistics. Former Costa Rican President Laura Chinchilla (see tweet below) and other news outlets noted the number of homicides in 2016 is the highest in the country's history.

In April 2016, Bolivian Interior Minister Carlos Romero stated that the country's homicide rate stood at 10.8 per 100,000. While it is unclear which year he was referring to, this figure reportedly based on data from the United Nations Office on Drugs and Crime (UNODC).

Panama's National Police announced on December 22 that the country witnessed 375 homicides last year for a homicide rate of 9.3 per 100,000. This is a slight decrease from the 434 homicides recorded in 2015. The provinces with the highest number of homicides in 2016 coincided with those that have the largest number of gangs, suggesting these groups could be a principal cause of violence in the country.

Paraguay's Interior Ministry, using data from the National Police, reported last October (pdf) that there were 617 homicides in 2015 for a homicide rate of 8.8 per 100,000. This constitutes an uptick from the 2014 homicide rate of 7.9 per 100,000, bucking a trend of slightly declining murders seen in previous years.

Brazilian gangs that have set up operations across the border and large-scale marijuana production made the eastern department of Amambay by far the country's most violent in 2015, posting a homicide rate almost twelve times the national average.

Homicides fell by nearly 10 percent in 2016, according to Uruguay's Interior Ministry, to 265 from 293 in 2015. The homicide rate correspondingly decreased from 8.5 to 7.6 per 100,000. The largest drop in murders occurred in the department of Montevideo with a 15.6 percent decline, according to the Ministry.

The National Institute of Statistics and Information announced last July that Peru's homicide rate inched upward from 6.7 per 100,00 in 2014 to 7.2 in 2015. The northwestern city of Tumbes registered a murder rate nearly six times the national average, while Lima posted a rate of just 6 per 100,000.

National Police Deputy Director Francisco Díaz told journalists that Nicaragua registered 460 homicides through December 18 for a homicide rate of 7 per 100,000. This figure represents a slight drop from the 8 per 100,000 posted in 2015. Much of the country was virtually violence-free last year; Díaz said that 65 percent of the country's 153 municipalities registered either one or zero homicides during all of 2016.

Data provided by the World Bank shows Chile's homicide rate was 3.6 per 100,000 in 2014, the most recent year available. Although InSight Crime could not find official homicide data for 2015 or 2016, it's unlikely the country's security situation has changed dramatically. Chile's murder rate has hovered between 2 and 4 per 100,000 in recent years and has not eclipsed 5 per 100,000 since 1955, according to the country's Library of Congress.

*Murder rates calculated by InSight Crime, based on number of reported homicides and the country's 2016 estimated population total, according to the Population Reference Bureau (pdf).

Camilla Harrison-Allen and Randall Ramos contributed reporting for this article.

El Salvador will hold off on extraditing a top MS13 gang leader to the United States to face terrorism charges.