Welcome to InSight Crime's Game Changers 2015, where we highlight the year's most important trends in organized crime in Latin America and the Caribbean. This year saw some potentially game changing developments related to government corruption, organized crime, and rising pressure to alter alliances between members of the state and criminal groups. It also saw important shifts in the criminal world, in particular related to street gangs and the realignment of large criminal enterprises.

From Mexico to Brazil and numerous places in between, officials came under fire for establishing mafia-like schemes that defrauded their citizens and ensured impunity for government officials connected to criminal groups. The long-term results of the widespread outcry from multilateral bodies, non-governmental organizations, private sector, political organizations, and religious and civic groups designed to disrupt these criminal networks are not yet clear, but the short-term impact has been profound.

In August, Guatemala's President Otto Perez Molina resigned. This came just three months after Guatemala's Vice President Roxana Baldetti resigned. The two were accused of running a massive customs fraud scheme, which has been a mainstay of a criminal network run by current and ex-military officials for decades.

Perez and Baldetti's departures came after the United Nations-backed International Commission Against Impunity in Guatemala (Comision Internacional Contra la Impunidad en Guatemala - CICIG), working with the Attorney General's Office, began revealing a spate of corruption cases. These investigations touched the highest levels of congress, as well as government purveyors such as the social security institute and mayors' offices. All of these had set up criminal networks to embezzle money from the government coffers. The public outcry that followed hastened the officials' departures. 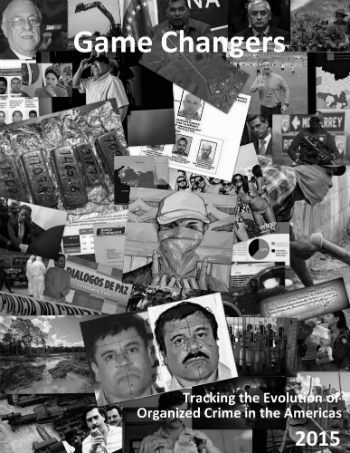 In Mexico, the power and popularity of President Enrique Peña Nieto's government has eroded in large part due to its handling of several major security crises, some of which spilled over from 2014. These events include the disappearance and likely murder of 43 students at the hands of a criminal group with deep ties to the local government and police; the apparent massacre of at least 22 suspected criminals by the Mexican army; and the dramatic escape of Joaquin "Chapo" Guzman from a high security prison in June.

Outside investigators from the Inter-American Commission on Human Rights (IACHR) pilloried Mexico's Attorney General's Office for the numerous gaps, inconsistencies, and improbable explanations about what happened to the student teachers. In October, the government's own Human Rights Commission confirmed that the army extra-judicially executed at least 15 of the 22 suspected criminals in the so-called Tlatlaya massacre. And in September, the government arrested 13 officials -- including the former head of the prison system -- for allegedly assisting Guzman's flight to freedom via a one-kilometer tunnel that ran from underneath the shower in his jail cell to a small farmhouse.

Mexico did report a drop in homicides in some parts of the country. Other countries also saw some progress in this area, most notably Honduras. Once the most violent country in the world not at war, Honduras saw homicides go down for the second year in a row, although the number of reported massacres increased.

Taking Honduras' place was El Salvador, where violence between gangs, vigilante groups, and security forces have turned the country into a low-intensity war zone. In all parts of the region, there are questions about the reliability of the data being used to generate these statistics.

The fallout from a failed gang truce in El Salvador continued to spur discussion of the nature of Latin America's street gangs and how they are evolving. Authorities blamed the gangs for several improvised explosive devices, but there is little evidence to suggest these groups are sophisticated enough to begin using such tactics on a regular basis, if at all. Some parts of the gangs do appear to be maturing into more transnational criminal organizations, but this process is slow and uneven.

Meanwhile, "mega-gangs" in Venezuela and new generation criminal groups in Mexico -- particularly the Jalisco Cartel-New Generation (Cartel de Jalisco – Nueva Generacion - CJNG), which carried out several violent attacks against the state -- demonstrated signs of developing into more sophisticated, aggressive criminal structures with an ability to compete with the traditional criminal structures such as the Sinaloa Cartel in those countries.

The evolution of criminal organizations across the region accompanied a shift in drug trafficking and political dynamics in certain areas. Criminal groups adjusted to local security forces and international efforts to slow their activities by changing drug trafficking routes and getting directly involved in the election process.

In the Andes, Colombia saw some major steps forward in peace negotiations with the guerrilla group, the Revolutionary Armed Forces of Colombia (Fuerzas Armadas Revolucionarias de Colombia - FARC). These came despite a few significant setbacks. Colombia, for example, reclaimed its position as the world's top producer of cocaine. Nevertheless, the government decided to halt coca fumigation as part of its anti-drug strategy.

Public interest in Colombia's drug war was also reignited after the release of Netflix's "Narcos." Based on the life of Pablo Escobar, the series did more to reinforce the traditional, US-centric drug war narrative than educate people about this complex capo's life and exploits. This was one of several popular and documentary-style examinations of the criminal dynamics in the region that caught our eye.

Ultimately though, 2015 will be remembered as a year of significant progress in the investigation of ties between elites and organized crime in the region, particularly in Central America where top level business and political figures such as Jaime Rosenthal Oliva were indicted for money laundering. Many of these investigations are still in their preliminary stages. These justice systems are still fragile and corruptible, so any analysis of these events remains partial and premature.

Even in Guatemala, where the CICIG has shown the way, it is the Guatemalan justice system that has to prosecute powerful figures such as the former president and vice president. The year 2016 will be a litmus test for these justice systems and the region's ability to root out the organized crime-corruption networks that permeate so much of the region's governments.

The Sinaloa Cartel, already thought to be the largest supplier of methamphetamine to the US, may be shifting production southwards…

Is The FARC Growing Coca In Panama?

The police chief in Nuevo Laredo has gone missing while two of his brothers have been found dead, the third…