US authorities fear Joaquin “El Chapo” Guzman may use his extensive criminal contacts in Colombia to escape the massive manhunt in Mexico, but the fugitive drug lord has potential hideouts in three countries that are a lot closer to home.

US law enforcement officials have reportedly solicited Colombian authorities for information on the Sinaloa Cartel's contacts inside the country, reported El Tiempo. The request comes just one week after Chapo, the presumed head of the cartel, escaped in dramatic fashion from a maximum-security prison for the second time.

According to intelligence documents accessed by El Tiempo, Colombia's largest criminal organization, the Urabeños, provide military and logistical support for Sinaloa operatives in the country. The Sinaloa Cartel's point person within the Urabeños is allegedly a businessman in Colombia's coffee region, while the Sinaloa's two principal emissaries in the country are only referred to as "Jairo Ortiz" and "Montiel." (See El Tiempo's graphic below)

The Mexican cartel also reportedly has a working relationship with 48th Front of the Revolutionary Armed Forces of Colombia (FARC) guerrillas. The 48th Front is known to be deeply involved in the drug trade in the southern department of Putumayo. The cartel also reportedly pays the Daniel Aldana Column $40,000 for every cocaine-laden boat that leaves their territory in Nariño and Cauca.

La Empresa ("The Business"), which operates in the Pacific port city of Buenaventura, is another key Sinaloa Cartel ally in Colombia, according to the report. The Medellin-based Oficina de Envigado as well as "Megateo," head of the Popular Liberation Army (EPL) guerrilla movement in Norte de Santander, also have drug trafficking ties to the cartel.

Through their agreements with these criminal groups in various parts of Colombia, the Sinaloa Cartel is believed to smuggle at least 100 tons of cocaine out of the country on an annual basis. 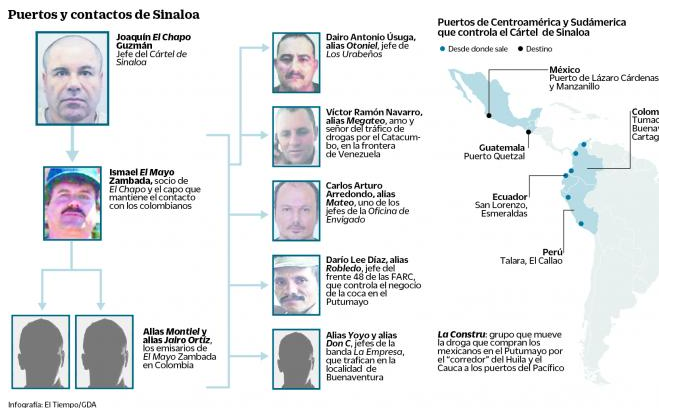 Chapo's escape was a national embarrassment for Mexico, and authorities have responded by deploying some 10,000 law enforcement officers to search for the drug lord. But odds are Guzman will remain in Mexico, where his contacts reach the highest levels, his tunnels are legendary, and he has proven that he can buy his way out of many situations. (See InSight Crime Co-director Steven Dudley answer this question on CNN below)

"There's no safer place for a guy like this than in Mexico" @stevensdudley @CNN on escape whereabouts of #ElChapo https://t.co/7sLb8PgsDK

Nonetheless, it is important to keep in mind that Guzman's vast network extends far beyond Mexico, as the El Tiempo report highlights. During the course of his criminal career, Chapo accumulated contacts throughout Central America's Northern Triangle -- Guatemala, El Salvador, and Honduras -- as well as various parts of South America.

Now that Chapo is on the run, Guzman may decide his best bet is to disappear within one of his criminal networks outside Mexico. While crossing national borders would be extremely risky, he has already proven his ability to elude authorities under seemingly insurmountable odds.

What's more, Guzman has built of reputation of being something of a nomad. Prior to his capture in 2014, there were speculation of Chapo's presence as far north as the United States, as far south as Argentina, and numerous other countries in between.

But the countries where Guzman is most likely to end up are the same places where his network is the strongest: the Northern Triangle, which has long been a key transshipment point of cocaine for the Sinaloa Cartel. (See map below) 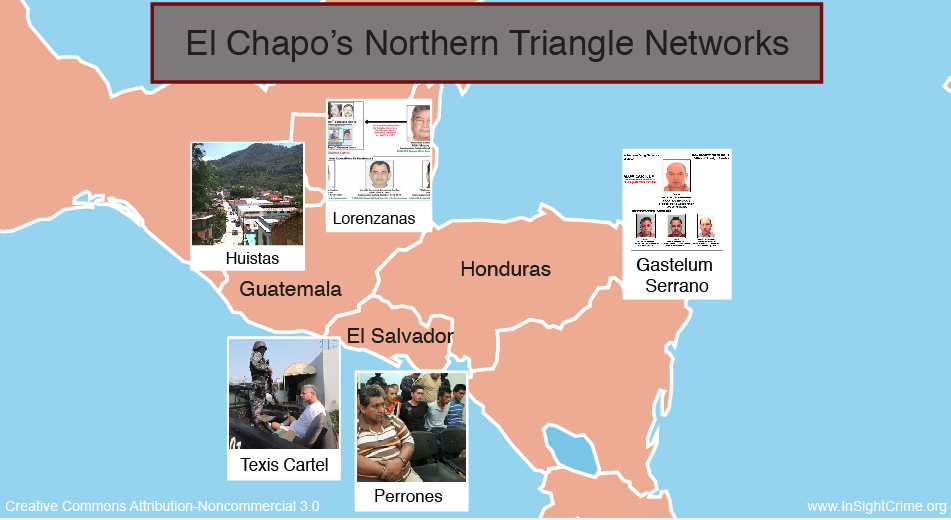 Chapo was first arrested in Guatemala in 1993, and the country shares an extensive border with southern Mexico. The Sinaloa Cartel has built strong contacts with several of Guatemala's most prominent drug transport groups. The Mendoza clan (based in the northern province of Peten) and the Huistas (which operate in the western province of Huehuetenango) have reportedly supplied drugs to the Mexican cartel for over a decade.

The drug trafficking network once run by Juan Alberto Ortiz Lopez, alias "Juan Chamale," is another key contact for the Sinaloa Cartel in Guatemala. From his base of operations in San Marcos, Juan Chamale provided the Sinaloa Cartel with large amounts of cocaine and was also a major supplier of opium poppy, which is used to produce heroin. Authorities believe Juan Chamale's network has continued working for the cartel following Chamale's arrest in March 2011.

Two of El Salvador's premier criminal organizations have strong links to the Sinaloa Cartel. The connections between Guzman and the Perrones (based in both eastern and western El Salvador) reportedly date back to at least 2002. According to reports, in 2011, the Perrones' main Sinaloa contact at the time, Elmer Bonifacio Medrano Escobar, met with Chapo in person in the Honduran city of La Brea. The Texis Cartel, whose network operates in northwestern El Salvador, has also transported cocaine for the Mexican drug trafficking organization.

In April, Mexican authorities captured the head of the Sinaloa Cartel in Central America, Cesar Gastelum Serrano, alias "La Señora," who ran drug trafficking operations from San Pedro Sula for as long as a decade. His arrest came just months after the US Treasury Department had designated Gastelum Serrano to its kingpin list, and called him "one of the most prolific suppliers of cocaine" for the Sinaloa Cartel.

The Sinaloa Cartel's presence in Honduras was blamed for a wave of homicides last year in San Pedro Sula, a hub for violence and drug trafficking in the region. Prior to Guzman's capture in 2014, numerous reports emerged that he was using Honduras as a hideout, although the allegations were never confirmed.

Indigenous Latest to Suffer Plague of Disappearances in Sonora, Mexico

The ongoing search for members of Mexico’s Yaqui Indigenous community, missing for well over a month, has become a rallying…