Why is Honduras So Violent?

Times are tough in Honduras. Worse, many of the country’s challenges are transnational in origin and are beyond the capacity of Hondurans to solve alone. They have nonetheless had a corrosive effect on Honduran society and its institutions. After the success of Plan Colombia and Mexico's crackdown on drug trafficking under President Felipe Calderon, Honduras became a major transshipment point for illicit drugs flowing to the United States.

It remains one of the most violent countries in the world due to a serious organized crime problem associated with drug trafficking and gangs. This has produced both internal displacement and a wave of undocumented immigrants to the United States (including unaccompanied minors). Drug trafficking has contributed to corruption, impunity, and insecurity in Honduras. President Juan Orlando Hernandez, who took office in 2014, responded with a crackdown on crime and the militarization of law enforcement, but faces serious criticism over corruption in government and human rights abuses by the security forces.

This article was originally published by Brookings, and is reprinted with permission. See the original here.

These are welcome signals from the government of a highly troubled country. But whether the international community can have a positive effect on the situation in Honduras depends on how these external missions are implemented and led, and the degree to which the Hernandez administration has the political will to take what will undoubtedly be difficult steps to overcome fierce resistance from entrenched political and economic interests.

Honduras has seen some improvement in recent years. President Hernandez was elected in 2013 on a platform of reducing violence, combating organized crime, and increasing prosperity. Since he took office, the rate of intentional homicide has been reduced from 79 per 100,000 to 68 per 100,000, according to the Observatory of Violence at the National Autonomous University of Honduras. And according to US officials, drug trafficking is down significantly as well.

While trend lines appear to be headed in the right direction, the situation in Honduras remains dire. As a result, Honduras, together with El Salvador and Guatemala, has appealed for international support in the form of a proposed Alliance for Prosperity in the Northern Triangle of Central America, a proposal developed in conjunction with the Inter-American Development Bank and the US government. Clearly the Honduran government is seeking to secure international support to address its domestic crisis.

President Hernandez’s efforts (and lack of progress) have not been uncontroversial in Honduras. Protesters have been on the streets of Tegucigalpa for months calling for his resignation and an end to government corruption and human rights violations.

The proposed MACCIH seeks to help address citizens’ concerns. It appears to emulate some, but not all, key aspects of the CICIG (International Commission Against Impunity in Guatemala), the UN-led commission to combat impunity in Guatemala. The MACCIH will include independent judges and prosecutors to “supervise and lend specialized technical support” to their Honduran counterparts; a role for the Justice Studies Center of the Americas in proposing reforms to Honduran legislation; an internationally supported review of the effectiveness of the public security system in Honduras; and a civil society observatory to evaluate and measure progress towards reform. 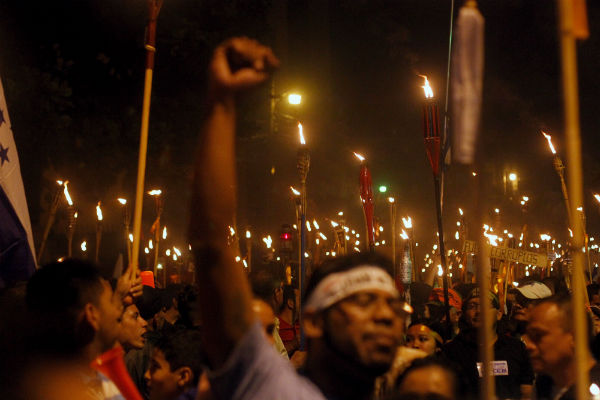 President Hernandez takes a risk in welcoming the OAS-led MACCIH. After all, the CICIG in Guatemala contributed to building the case against President Otto Perez Molina on corruption charges, which led to his resignation and arrest. OAS Secretary-General Almagro has made it clear that transparency is one of the principal tools available to the international community, should the Honduran government resist implementing the reforms proposed by MACCIH. He has also promised to release all MACCIH findings.

A UN human rights monitoring mission for Honduras, similar to those which have functioned with great autonomy and integrity in other states in crisis, will further add to the amount of information available to the Honduran public and international community about government progress towards reform.

With these recent initiatives, Honduras appears to be signaling that it is open to the international community’s help. And should increased US aid be approved for Honduras in support of the Alliance for Progress, the US Congress will undoubtedly add to the international scrutiny of the Honduran government’s efforts to address the present crisis.

But beyond contributing to transparency, how will regional and international mechanisms help Honduras during this critical time? Here is where MACCIH will be imperative because of its focus on improving the judicial system and building prosecutorial capacity in Honduras. Because of the potential contributions MACCIH can make to reducing impunity, we should raise questions now about its ability to function as independently -- and effectively -- as the CICIG has in Guatemala. At the very least, the process for selecting international judges and prosecutors must be absolutely transparent, and the MACCIH will have to interpret its mandate broadly to include both supervising and supporting the Honduran justice system (as stated in the OAS proposal), rather than merely accompanying it in its labors.

At an Alan and Jane Batkin International Leaders Forum at Brookings this week, President Hernandez indicated a desire to benefit from “lessons learned” of others to address the deep seated challenges his country faces. At least some in Honduras’ judiciary have shown their commitment to reducing impunity by beginning a trial this week against congressional vice president and ruling National Party member Lena Gutierrez for her role in a medical sales scandal.

Critics in Honduras and the United States have correctly pointed out that Honduras has had a terrible track record on fighting impunity and corruption. There are undoubtedly entrenched, corrupt interests in Honduras that will oppose reform. The Hernandez administration would be wise to take advantage of greater transparency and scrutiny to pursue actions recommended by OAS and UN-led missions to their fullest extent, some of which will undoubtedly cut close to the interests of Honduras’ elites.

If the government tries to deflect the efforts of the international bodies whose support it has invited, this will quickly become apparent to all. That would provide ammunition for its critics at home and further increase political pressure for change in this troubled country.

Even if the international community is unable to help Honduras fully address its most troubling challenges (organized crime, corruption, human rights violations), at the very least the enhanced level of scrutiny will put the government on notice to deliver on its commitments to improve -- or have its shortcomings exposed for all to see.

*This article was originally published by Brookings, and is reprinted with permission. See the original here.

Is Belize's Gang Truce Breaking Down?

Despite its initial success in reducing violence in the capital, a gang truce in Belize's capital city appears to be…

In the second part of a series on ungoverned spaces in Central and Latin America, Southern Pulse surveys cities in…