The US Drug Enforcement Administration (DEA) recently presented an award to Ecuador’s Interior Ministry in recognition of the country’s drug interdiction efforts, signaling its approval of increasing drug seizures by Ecuadorian authorities.

The Interior Ministry announced its acceptance of the award in a June 6 press release. According to the statement, Interior Minister José Serrano Salgado received the award in Washington “for his strong leadership in the national and international counternarcotics fight and the excellent results obtained by the anti-narcotics police in Ecuador in recent years.”

An accompanying infographic (below) stated that the Ecuadorian National Police has carried out more than 4,800 anti-drug operations so far this year, resulting in the seizure of more than 47 metric tons of drugs and the dismantling of 29 criminal organizations. 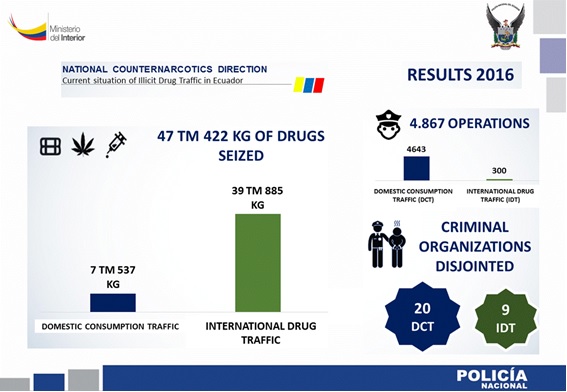 Although the vast majority of the police operations were targeted at domestic drug distribution (about 95 percent), the police figures indicated that the majority of the seized drugs were destined for the international market (39.9 out of 47.4 total metric tons, or about 84 percent).

Accurate drug seizure statistics are notoriously difficult to compile, but it does appear that Ecuadorian authorities have ramped up drug interdiction efforts in recent years. According to Ecuadorian police statistics cited in the most recent International Narcotics Control Strategy Report (INCSR) from the US State Department, Ecuador seized more than 72 metric tons of drugs in 2015, up from about 52 metric tons the previous year.

The Ecuadorian government has been sending mixed signals recently about the focus of its counternarcotics policies. Last year, authorities indicated that they were attempting to shift their focus from combating international drug trafficking to fighting domestic microtrafficking, which has been linked to rising violence in Ecuador.

However, Ecuador has long served as a hub for international trafficking. The country lies between the world’s two largest producers of cocaine -- Colombia to the north, and Peru to the south -- and its largest city, Guayaquil, serves as one of the busiest ports in Latin America. Maritime drug trafficking has long been a theme in the Ecuadorian underworld. The first discovery of a “narco-submarine” was made in Ecuador in 2010, and hundreds of Ecuadorian fishermen have been arrested in recent years for ties to the drug trade.

The use of Ecuador as a transit country for drugs destined for the international market may have contributed to the growth of domestic markets for microtrafficking, which means that the two issues should not be viewed in isolation from one another.

Interior Minister Serrano’s comments upon accepting the DEA award seem to indicate an understanding of the complexities of the issue.