A new report from the US Drug Enforcement Administration (DEA) marks the agency’s most recent attempt to call attention to the problem of fentanyls, a category of drugs that authorities say is contributing to severe opioid abuse issues in the world’s largest drug market.

The report (pdf), released July 22, points to Mexico and China as key nodes in the international distribution chain for fentanyls -- synthetic opioid drugs similar to morphine and heroin, but many times more potent.

According to the DEA report, “China is the primary source of supply for fentanyls and fentanyl precursors destined for the United States, Canada, and Mexico.”

Media outlets like Caixin Online have previously documented how chemists working in clandestine laboratories in China have proven adept at developing synthetic drugs and precursor chemicals that skirt the government’s tightening regulations on such substances, often selling their products over the internet.

Moreover, the US anti-drug agency says drug producers working in the United States, Canada and Mexico have obtained loosely regulated precursor chemicals and related equipment from China in order to produce fentanyl products closer to their intended markets. (See the DEA graphic below) 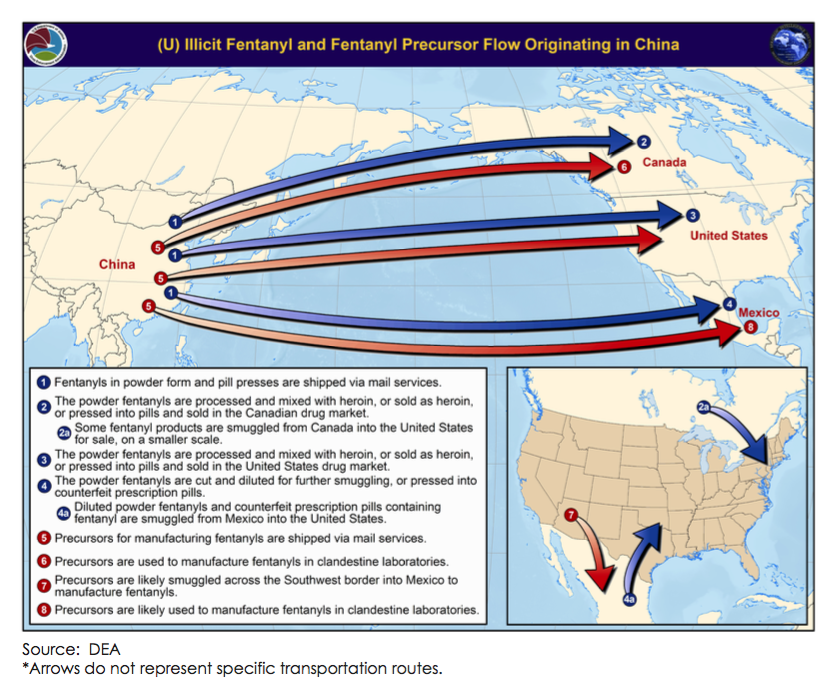 According to the DEA, fentanyl precursor chemicals are smuggled from China directly into Mexico as well as indirectly via the United States. In both countries, fentanyl is often combined with or substituted for heroin, or it is pressed into counterfeit pills that are passed off on unsuspecting consumers.

The DEA says fentanyl’s presence in US markets is expanding rapidly: “exhibits,” or seizures, of fentanyl in the United States skyrocketed from 934 in 2013 to more than 13,000 in 2015. The Centers for Disease Control and Prevention has linked the growing availability of fentanyls to large increases in opioid overdose fatalities in recent years.

The enormous profitability of the fentanyl trade has likely contributed to its rapid expansion.

“Traffickers can typically purchase a kilogram of fentanyl powder for a few thousand dollars from a Chinese supplier, transform it into hundreds of thousands of pills, and sell the counterfeit pills for millions of dollars in profit,” the DEA report states.

Similarly, during an investigation into the fentanyl trade, one Mexican trafficker told the news outlet Fusion that there is “almost nobody making pure heroin anymore,” because fentanyl-laced heroin “is so much stronger.”

Additionally, a number of experts have linked the over-prescription of legal opioid medications to the growth in demand for illicit drugs with similar effects. Pharmaceutical company employees have even been criminally charged with paying kickbacks to doctors in order to improperly induce them to over-prescribe legal fentanyl products.

The DEA has previously raised concerns about what the agency describes as the fentanyl “crisis” in the United States. During congressional testimony in March (pdf), DEA official Louis J. Milione said that the agency was becoming “increasingly alarmed” about fentanyl, citing a “recent spike in overdose deaths” related to the drug’s use. In June, the DEA released a video warning law enforcement agents around the country about the dangers of improperly handling fentanyl seized during the course of their duties.

Other branches of the US government have also expressed concern about the expansion of the illicit fentanyl trade. On July 14, US Senators Ed Markey (D-Mass.) and Marco Rubio (R-Fla.) introduced a resolution calling the increasing abuse and overdose deaths related to fentanyl “a public health crisis,” and highlighting the importance of US cooperation with China and Mexico to tackle the issue.

Those countries have expressed a willingness to cooperate on combating the fentanyl trade. In September 2015, US and Chinese authorities held a meeting aimed at improving counternarcotics cooperation. And during a public appearance in Washington, DC this week, Mexico’s Attorney General Arely Gómez specifically mentioned fentanyl when discussing her government’s plans to continue cooperating on anti-drugs efforts with US counterparts.

In two separate cases in El Salvador, mayors are accused of heading migrant smuggling rings, a crime that,…

Proposed changes to Ecuador's penal code would decriminalize possession of drugs for personal use, including up to 10 grams of…

A new report from the United Nations says global cocaine and opium production are at an all-time high, and joins…