Recent homicide statistics out of Mexico continue to show an increasing trend, with murders linked to organized crime showing a substantial rise through the first half of 2016 compared to the same period last year.

Data released by the Mexican organization Semáforo Delictivo -- and which was compiled in collaboration with the firm Lantia Consultores -- documented 9,615 homicides through the first half of 2016, a 16 percent increase over the first six months of 2015.

Of these homicides, 5,413 were linked to organized crime, marking a 33 percent increase over 2015, reported Proceso.

"What we have observed in the first semester of the year … is an increase in homicides, organized crime murders, car theft and sexual assault," said founder and director of Semáforo Delictivo, Santiago Roel, during a press conference. "Meanwhile, other crimes we monitor have fallen compared to the same period last year."

Additional crimes Semáforo Delictivo monitors are kidnapping, extortion and home thefts, among others.

Supplementary data from Mexico's National Public Security System (Sistema Nacional de Seguridad Pública – SNSP) found six of every 10 homicides this year have been committed using a firearm. The SNSP also reported 1,666 homicide investigations were opened in June, second only to the 1,746 opened in May for the highest number since September 2012. 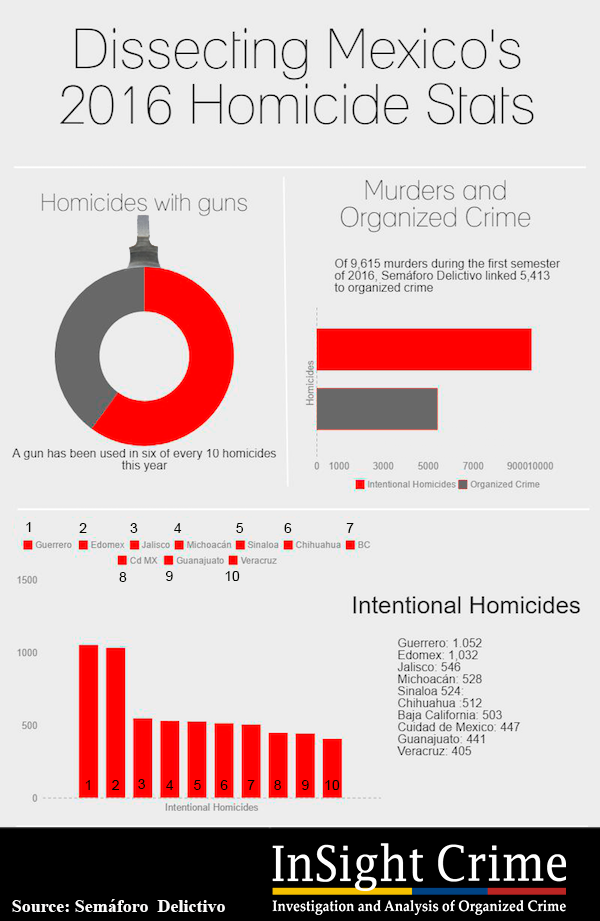 Mexico has seen a steady increase in murders since last year, which was the first time the country saw an increase in homicide figures since 2011, when 27,000 people were killed by violence.

As InSight Crime has noted, perhaps most concerning about Mexico's rising homicide levels this year is that geographic regions not traditionally plagued by violence have seen upticks in murders. Much of the increase in violence, however, has been blamed on confrontations between competing criminal factions, particularly in the state of Guerrero.

Mexican Cartel Presence in US 'Exaggerated'

Reports by US authorities that Mexican cartels have a presence in more than 1,000 US cities were widely exaggerated,…

The CJNG is a criminal group that has evolved as a result of killings, captures and rifts in older cartels.

How Human Trafficking Worsened in Mexico During COVID-19

The number of human trafficking victims in Mexico is growing, as traffickers target vulnerable people hit hard by the COVID-19…