Nearly 13,000 guns have been lost or stolen from Mexico’s public security agencies over the last ten years, according to a recent report, a telling reminder that the country's black market weapons don't just come from north of the border.

The majority of the 12,878 weapons that went missing or were stolen during that period disappeared in Mexico City, Mexico State, Chihuahua, Guerrero and Jalisco, according to documents from Mexico’s National Institute of Transparency, Access to Information and Protection of Personal Data (IFAI) accessed by Milenio.

In 2009, 800 guns were lost or stolen from local police stations in Mexico City -- 637 handguns and 163 long arms. That was also the year that the most guns vanished nationwide. (See Milenio's graph below)

The Mexican government increased its purchase of firearms by more than three-fold in the first half of this decade. The Stockholm International Peace Research Institute (Sipri) reports that Mexico’s arms imports grew by 331 percent between 2011–15 compared with 2006–10. 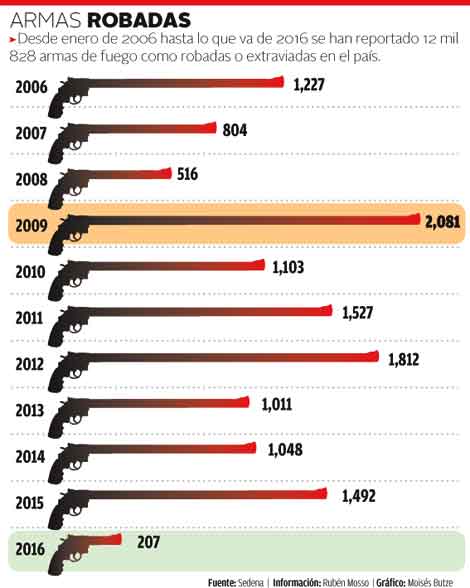 The missing weapons described by Milenio were likely destined for Mexico’s black market and bought up by organized criminal networks and, possibly, the armed vigilante groups operating in many parts of the Republic, for use against rival gangs as well as state agents.

Significantly, these figures go some way to countering the idea that all illegal arms in Mexico come from the United States. Arms trafficked from Mexico's northern neighbor have been found to be the biggest source of illegal weapons for Mexican criminal gangs. A 2012 government study found that more than 70 percent of firearms recovered in Mexico in the five years prior could be traced to the US.

The fact that so many guns have gone missing within Mexico, and reports that some cartels might even be manufacturing their own weapons, points to a diversification on the part of criminal gangs in how they source their weapons.

The demand for guns has shot up parallel with the militarization of Mexico’s so-called “drug war”. The 331 percent increase of legal weapons imports from abroad shows that the Mexican government is arming up, not dialing it down.

Latin America's environmental and land protectors are routinely murdered by the regions criminals.

Wildlife traffickers in Mexico are taking advantage of the social media marketplace, placing some of Mexico’s endangered species in peril.