Authorities in Mexico continue to focus on hunting down the heads of the country's most prominent cartels, pursuing a kingpin strategy that will probably do little to cure a dire security situation given the the nation's increasingly fragmented organized crime landscape.

Mexico’s Attorney General’s Office holds a list of 15 individuals considered to be the most prominent drug lords from various criminal organizations, reported Posta. Their arrest is considered a high priority following the re-capture of Joaquin "El Chapo" Guzmán earlier this year.

Five of the individuals are members of the Sinaloa Cartel, arguably the most infamous drug trafficking group in the country and El Chapo’s former organization.

Ismael Zambada Garcia “El Mayo” was El Chapo’s partner and heads one of the most prominent factions of the cartel. Juan Jose Esparragoza Moreno, alias "El Azul", is a former police detective whose history in the drug business stretches back to the defunct Guadalajara Cartel in the 1980s. More recently, he played an important but discrete role within the Sinaloa leadership.

Dámaso López Núñez, alias “El Licenciado”, rose through the ranks of the organization after having facilitated El Chapo’s first of two prison escapes in 2001. He was considered for some time to be El Chapo’s designated successor, although the cartel’s decentralized structure weakens those claims. His son, Dámaso López Serrano, alias “El Mini Lic,” a godson of El Chapo, is also on the list. He heads the cartel's “Los Ántrax" faction which operates in Culiacán.

Rounding out Sinaloa's top fugitives is José Antonio Cueto López, who the Attorney General’s Office believes operates as intermediary between the cartel and public officials in the Mexico City, according to Posta. 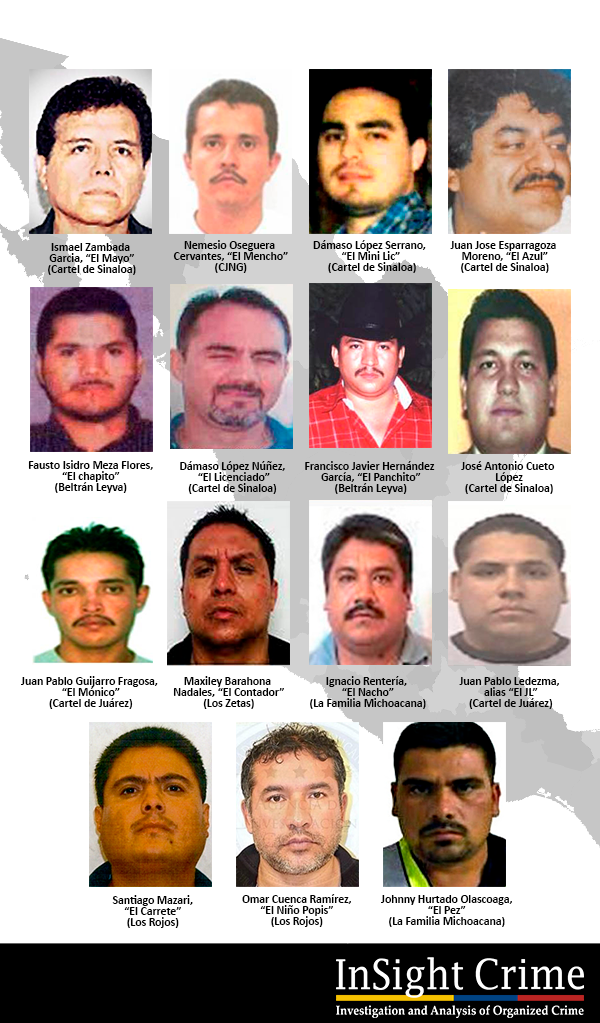 The Juárez Cartel has been a major player since the 1980s but is thought to have experienced significant decline in recent years. Two members of the organization are on the list. Juan Pablo Ledezma, alias “El JL”, is considered to be its current leader following the arrest of Vicente Carrillo Fuentes, “El Viceroy,” in October 2014. Juan Pablo Guijarro Fragosa, alias “El Mónico” or “El H1,” is head of the cartel’s enforcement arm “La Línea.”

Fausto Isidro Meza Flores, alias "Chapo" or "Chapito" Isidro, is believed by some to have taken control of the BLO following the arrest of Hector Beltran in 2014. He allegedly headed the group known as the "Mazatlecos" in the war against the Sinaloa Cartel for the control of the Golden Triangle, a strategic poppy cultivation and trafficking region in northern Mexico.

Francisco Javier Hernández García, “El Panchito,” was the intermediary between the BLO and the Juárez and Gulf cartels. He was reportedly arrested in February 2016.

Two members of the BLO splinter group Los Rojos appear on the list. Its leader Santiago Mazari, alias “El Carrete” or “El 8,” and his partner Omar Cuenca Ramírez, “El Niño Popis,” who is in charge of the group’s operations in Guerrero, according to Posta.

Ignacio Rentería, alias “El Nacho," is in charge of the Familia's operations in Uruapan, Michoacán’s second biggest city. The Attorney General’s Office offers a 10 million peso reward for information leading to his arrest. Johnny Hurtado Olascoaga, “El Pez,” or “El Fish,” controls the organization’s activities in the Terra Calienta region and is allegedly responsible for a 2014 wave of kidnappings in Valle de Bravo, State of Mexico.

Maxiley Barahona Nadales, alias “El Contador,” is in charge of Los Zetas’ activities in Veracruz, Tabasco and Chiapas. He was allegedly a close lieutenant of Miguel Ángel Treviño,“Z-40,” the former head of the cartel who was captured in 2013.

Nemesio Oseguera Cervantes, alias “El Mencho,” is the leader and founder of the CJNG. His organization has become one of Mexico's most powerful cartels, operating in a total of eight states, more than any other group in the country.

President Enrique Peña Nieto’s administration has persistently oriented its antidrug strategy on the basis of an evolving most wanted list, all while attempting to minimize the public awareness of it.

Keeping the names of high-valued targets secret could be justified by the need to protect ongoing investigations. But it also makes political sense for an administration whose president ran on the promise of abandoning his predecessor’s kingpin strategy before adopting an almost identical drug policy. The government has recently claimed important advances in its fight against crime, even as Mexico's homicide rate is climbing.

While the government focuses on top drug lords, the country's has witnessed further fragmentation of its criminal landscape, with Mexico’s Attorney General’s Office admitting to the existence of more than 40 gangs working for nine powerful cartels in 2014.