For the second time this year, the US Treasury Department has targeted Mexican drug trafficking group Los Cuinis, placing a surprising amount of attention on this relatively unknown criminal organization.

John E. Smith, Acting Director of OFAC, said Los Cuinis "is one of the most powerful and violent drug cartels in Mexico" and that the designation "marks the first step in dismantling its significant business network.”

Included among the 15 businesses added to the list are a boutique hotel, two real estate firms, and two shopping centers. (See Treasury's chart below) The OFAC sanctions freeze any US assets of those listed and can sanction anyone who engages in transactions with them. 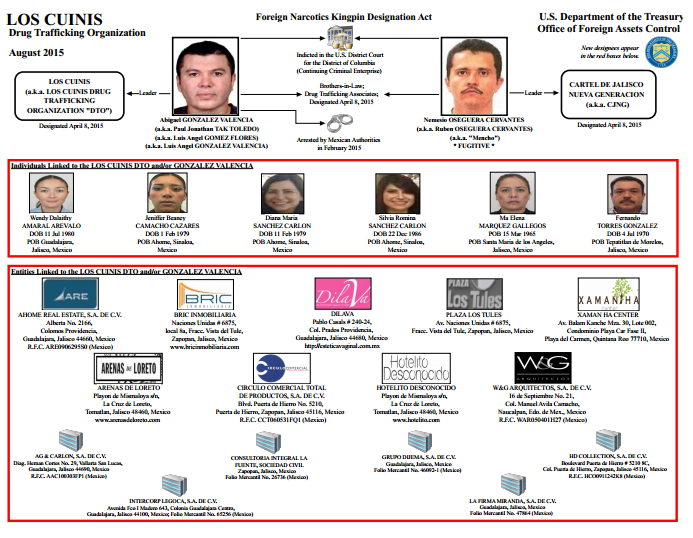 This latest Treasury designation shows the US government is clearly increasing pressure on Los Cuinis, and may be a precursor to more significant legal actions such as indictments. In April, OFAC designated Los Cuinis and Gonzalez Valencia to the Kingpin list alongside the Jalisco Cartel - New Generation (CJNG) "for their significant roles in international narcotics trafficking.”

Despite the attention from US authorities, little public information exists about Los Cuinis, which, according to the Treasury, first arose in the 1990s as a faction of the Milenio Cartel. The Treasury also states Los Cuinis are close allies of the CJNG, which burst onto Mexico’s crime scene this year with a series of bold attacks on government forces.

However, the exact relationship between the CJNG and Los Cuinis remains murky. There is speculation in the Mexican media that Los Cuinis’ leadership controls the CJNG. Notably, a recent report (pdf) by the US Drug Enforcement Administration (DEA) did not include Los Cuinis as one of the eight major drug trafficking groups currently operating in Mexico, despite the Treasury labeling them as one of the country's "most dangerous and violent drug cartels."