The US government has blacklisted members of Colombia's FARC for running a drug trafficking and money laundering network in Switzerland, a move that may complicate the rebel army's ongoing peace negotiations with the government.

On August 27, the US Treasury Department's Office of Foreign Assets Control (OFAC) added four Swiss-based members of the Revolutionary Armed Forces of Colombia (FARC) to its "Kingpin" list. (See Treasury's chart below) According to Treasury, the four FARC operators are Colombian nationals who provide the rebel army access to the international financial system via their business in Zurich, the Colombiano Latin Shop.

Three of the individuals are also accused of trafficking narcotics within Switzerland that were sourced from Colombia and Panama.

“Today’s action combats the FARC’s efforts to finance its ruthless operation and expand the flow of drugs to U.S. and world markets,” said John E. Smith, Acting Director of OFAC. “The FARC is a narcotics trafficking organization and Treasury will continue to isolate its financial operatives,” Smith added. 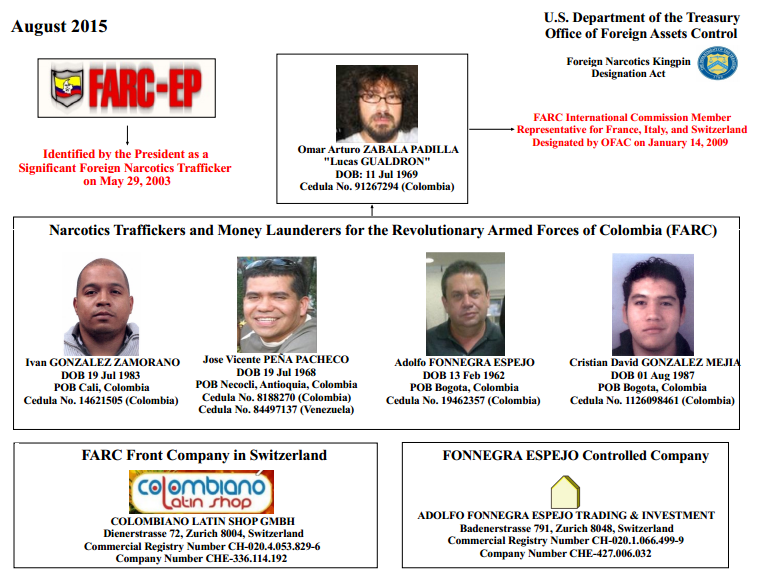 The Treasury's blacklisting could inhibit the progress of peace talks in Havana between the Colombian government and the FARC, particularly with respect to the rebel group's involvement in the drug trade. Statements by US officials that the FARC are a drug trafficking organization are unlikely to sit well with the guerrilla group's top commanders, who only admit to imposing a "gramaje," or tax, on different links of the drug chain.

The designation could also make FARC commanders even more nervous about how the issue of transitional justice would be resolved within the framework of a peace accord. Numerous FARC leaders are wanted by the US government, and this may only heighten existing fears that these commanders would be extradited to the United States following demobilization.

What's more, the recent action may expose a rift between how the US and Colombian governments expect transitional justice to be meted out. President Juan Manuel Santos has previously suggested making drug trafficking a political crime, a necessary step in order to pardon FARC elements involved in the drug trade.

This is not the first time the US government has taken action against FARC members for foreign drug trafficking. In 2002, Eugenio Vargas Perdomo, alias "Carlos Bolas," was arrested in Suriname and quickly extradited to the United States, where he was convicted of handling over 200 tons of cocaine for the FARC's 16th Front. In 2004, the finance chief for the rebel army's 14th Front, Anayibe Rojas Valderrama, alias "Sonia," was captured and also sent to the United States. She was found guilty of sending tons of cocaine to the United States while operating in Panama.