Despite Colombia Accord, a New Rebel Threat Emerges

Colombia's ELN rebel group is reportedly moving in on territory abandoned by the FARC guerrillas as part of their peace deal with the government, drawing attention to an inconvenient truth: the ELN stands much to gain from continuing its armed struggle.

In the remote region of Catatumbo and the mining town of Anorí in the department of Antioquia, locals say rebel fighters continue to charge extortion fees, euphemistically known as "vaccines." But the uniforms, they say, have changed: the armbands worn by the Revolutionary Armed Forces of Colombia (Fuerzas Armadas Revolucionarias de Colombia - FARC) have been replaced by those of the National Liberation Army (Ejército de Liberación Nacional - ELN).

Similar reports have come from southern Córdoba department, which has long been a breeding ground for Colombia's various guerrilla and neo-paramilitary groups, but not the ELN. Instead of extortion, locals say the ELN is offering to buy up farmers' supply of coca leaves at a higher price than was paid by the FARC.

These actions signal the ELN's attempt to stake its claim on the criminal booty that the FARC is presumably abandoning as part of its peace agreement with the government, which was announced in August and is scheduled to be signed in late September.

The ELN has also bolstered its presence in the coca-rich town of Tumaco, Nariño, from just 30 men to over 100, according to Colombia's Attorney General's Office. The area has traditionally been under control of the FARC's Daniel Aldana column, which has deep links to the illicit drug trade. Furthermore, indigenous leaders reported earlier this year that the ELN has already occupied FARC territory in the departments of Valle del Cauca, Cauca and Chocó, a presence also noted by intelligence sources.

In addition to its incursions into FARC territory, the ELN is showing off its military strength. The rebel group is currently carrying out a 72-hour armed strike that went into effect on September 12 in six departments of Colombia: Arauca, Boyacá, Casanare, Norte de Santander, Santander and Vichada. The strike marks the 36th anniversary of the Domingo Laín Front, the ELN's most formidable fighting force that counts 500 soldiers and 1,500 militias in its ranks.

As a result of the strike, the governor of Arauca temporarily shut down the school system there, businesses closed their doors, and the public transportation system was paralyzed. One police officer was injured by an explosive device.

Less than a month prior to the strike, the ELN kidnapped four rice farmers in Arauca. Two of the hostages, who were reportedly being held in Venezuela, have since been freed. 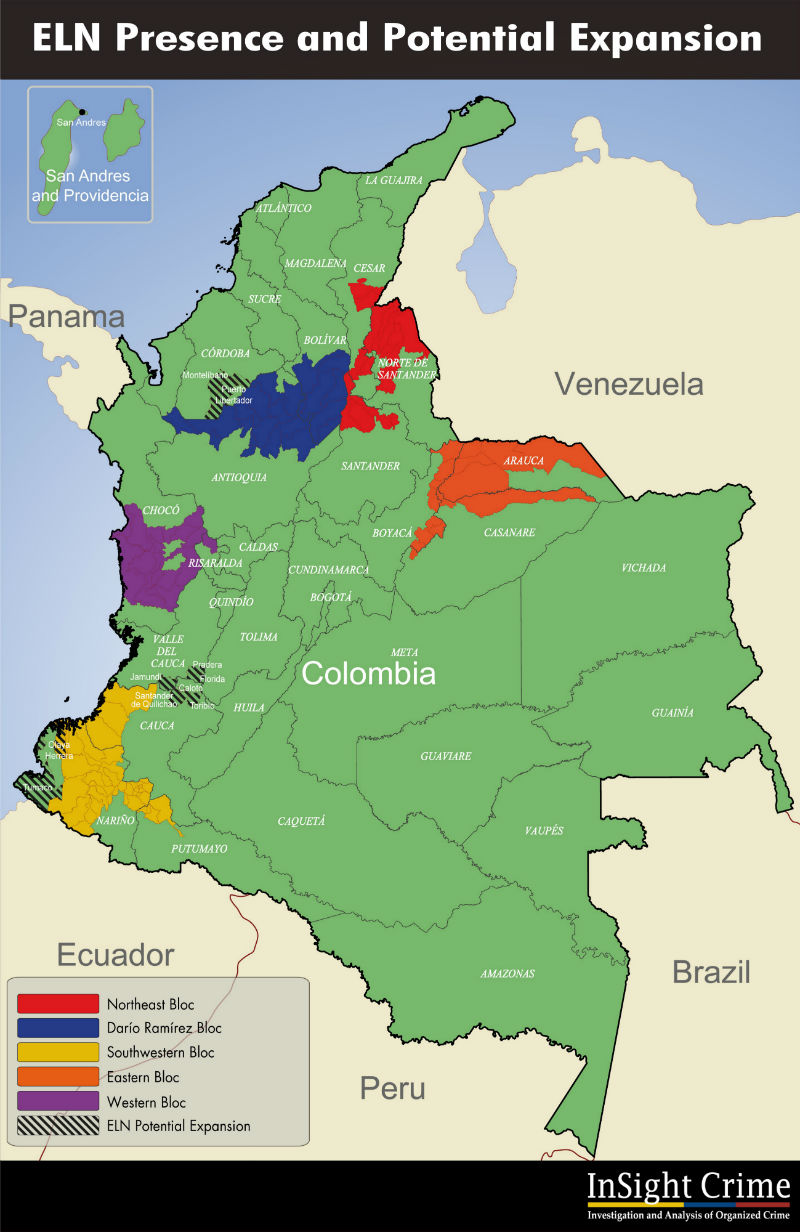 Colombia is on the verge of ending over 50 years of armed conflict with the FARC. But the possibility of the ELN reaching a negotiated agreement with the government appears to be as remote as ever.

The two sides were engaged in preliminary peace talks for almost two years before announcing this past March they were ready to begin formal negotiations. But the talks have yet to get off the ground in part because the ELN has refused to renounce kidnapping, a precondition for negotiations set by the government.

Perhaps an even more important motivating factor for the ELN to continue its insurgency is the potential financial and territorial windfall the group could see following a FARC demobilization. According to Ariel Ávila, an investigator at Fundación Paz y Reconciliación, the ELN are only present in 99 of Colombia's more than 1,100 municipalities; the FARC have a presence in 242, or more than double that of their rebel cousins.

The FARC also control up to 70 percent of all the coca grown in the country, while the ELN's role -- and profits -- in the illicit drug trade are much smaller. It comes as no surprise then that the ELN and neo-paramilitary groups known as "bandas criminales," or BACRIM, are all looking to appropriate this valuable criminal real estate.

Another potential gain for the ELN is in personnel and criminal know-how; in southern Córdoba, for instance, local authorities and military officials suspect that the supposed ELN presence is actually due to FARC members who have switched sides, or at least uniforms.

"I do not believe that [the FARC] have left so quickly, and I'm afraid that what is happening is that some have changed armbands," said a mayor in the region.

Likewise, the ELN fighters who appeared in Anorí reportedly already knew how much to charge each of their extortion victims, an indication the hand-over of responsibilities from the FARC to the ELN had been planned.

There even seems to be division over the COCE's stance towards the October 2 national referendum on the FARC's peace agreement. In an August 26 open letter to the FARC, the ELN's top commander, Nicolás Rodríguez Bautista, alias "Gabino," wished "the best successes" to the rebel group as it prepares to exit the conflict. But community leaders in Arauca who are campaigning for the agreement to be approved have reported coming under pressure from the ELN leaders in the area.

"Gabino may have said that they are not going to involve themselves in the process, but here, until 'Pablito' speaks, nothing is set in stone," one community leader told Colombian media outlet La Silla Vacía.

The FARC peace agreement is an historic achievement for Colombia, and the de-escalation of the conflict with the country's principal rebel group has already saved thousands of lives. But the forces conspiring to keep the ELN on the battlefield and away from the negotiating table ensure the armed conflict will outlive the FARC's looming demobilization.

And as before, the violence will be greatest in the areas where Colombia's illegal armed groups and criminal economies are strongest. A resident of southern Córdoba told La Silla Vacía that when the ELN announced their presence in the zone he closed his eyes and thought: "Looks like we are in for more killing."

Colombian coca cultivation and potential cocaine production has hit a record high. How will this impact the government's drugs policy?…