The FARC delegation at peace negotiations in Havana, Cuba
ANALYSIS

The recently announced concentration zones where FARC guerrillas will gather upon the signing of a peace agreement with Colombia's government provide the two sides an opportunity to prevent the continuation of violence and illegal activity in these areas.

The 23 concentration zones, as agreed to by the FARC and the Colombian government last week with the signing of a bilateral ceasefire, are located in 12 departments across Colombia. In addition to the concentration zones, which are officially known as "Transitory Hamlet Zones for Normalization," there will be eight FARC encampments.

Meta will also hold two of the FARC camps, which are smaller in size than the concentration zones.

According to a June 24 press release from the Defense Ministry, the zones were selected because they are in rural areas, are sufficiently "distant" from any border, and are not located where coca crops or illegal mining is present, among other criteria. Each zone will be encircled by a 1-kilometer buffer area, which neither guerrillas nor security forces will be allowed to enter.

The FARC will only move into the concentration zones once a final peace agreement is signed. Rebel fighters will spend up to 180 days in the zones, during which time the guerrillas will hand in their weapons to a United Nations verification mission and receive training on transitioning to civilian life. 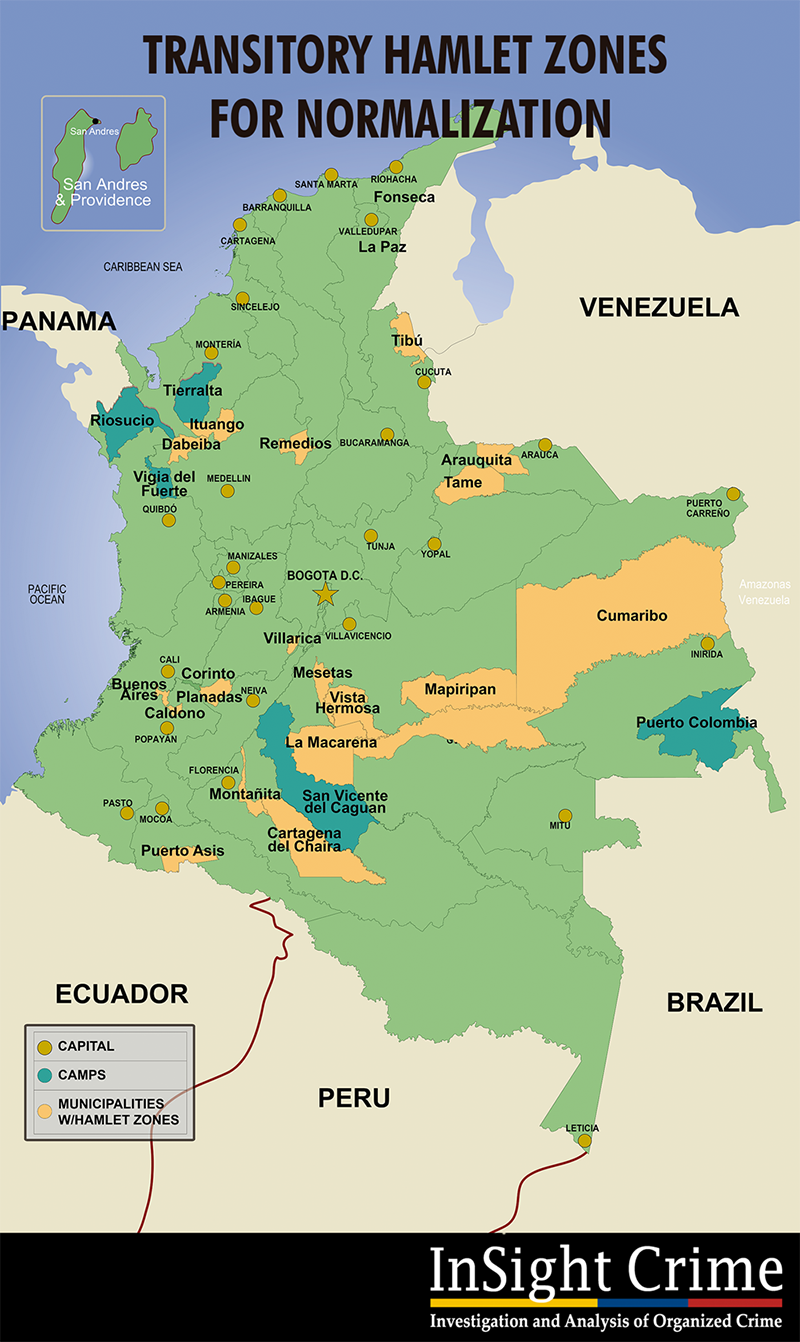 The majority of the concentration zones are located in municipalities that InSight Crime has identified as being at high risk of a recycling of criminal violence and economies in the aftermath of a peace agreement between the government and the FARC. In addition to the FARC, other criminal actors like rebel group the National Liberation Army (Ejército de Liberacion Nacional - ELN) and neo-paramilitary organization the Urabeños are present in many of the zones. These groups could grab control of the FARC's illicit economies, such as taxes on coca growing, in the event of a guerrilla demobilization.

For example, one of the concentration zones will be in Tibú, which is situated in the region of Catatumbo, the last stronghold of the Popular Liberation Army (Ejército Popular de Liberación – EPL) and one of the most profitable cocaine producing areas of the world. Numerous other armed groups have a presence in Catatumbo as well, all of which would be interested in taking over the FARC's illicit revenue streams.

There are signs that the wheels are already in motion for such a process. In recent months there have been reports of clashes between the FARC, ELN and Urabeños in several parts of the country, including Nariño, Antioquia and Chocó. The clashes have caused the displacement of hundreds of locals.

The establishment of the concentration zones, however, could lessen the possibility that such a violent realignment takes place, at least in and around where the zones are located. Security forces will have a significant presence in these areas, many of which have been neglected by the state for decades. By working with the FARC, the government may be able to help link these communities to the wider Colombian society and prevent the transfer of criminal economies to other illegal armed groups.

In so doing, the Colombian government will be attempting to avoid a repeat of history. The state's failure to take control of territory following the demobilization of the right-wing paramilitary organization United Self-Defense Forces of Colombia (Autodefensas Unidas de Colombia - AUC) in 2006 enabled the rise of criminal groups known as BACRIM (from the Spanish, "bandas criminales"). These groups currently represent one of the biggest security threats in Colombia.

In any event, the concentration zones only cover a fraction of the communities that are at high risk of continued violence and illegal activity in the event of a peace agreement; InSight Crime has identified almost 80 such municipalities across the country as part of field research conducted over the past year. The state will need to bolster its presence in these areas as well, but it's unlikely they will receive the same amount of attention as the concentration zones.

If the state remains absent, these high-risk areas not located near concentration zones may well turn into the key battlegrounds for control of the FARC's criminal economies once a peace deal is signed.

Prosecutors in Colombia held a hearing with the partner of alleged drug trafficker Guillermo León Acevedo, alias "Memo Fantasma," on…